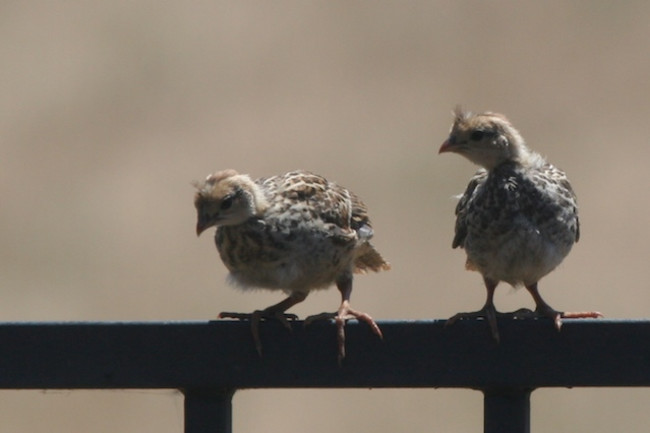 Personality is written not just in the genes, but in the egg yolk. It can even come from the kind of relationship that exists between an animal’s parents. Researchers found new evidence for this when they played matchmaker for several dozen quail. Even though the eggs were taken from their parents before hatching, bird couples in committed relationships had chicks with markedly different behaviors than couples who only dated. It’s not hard to forge a bond between Japanese quail (Coturnix japonica). In nature, the birds pair off into monogamous couples while they're mating and laying eggs. These relationships last for five or six weeks. During that time, mates stay side-by-side, and call out and search for each other if they’re separated. Behavioral researcher Océane Le Bot and her colleagues at the University of Rennes in France recreated these relationships using 60 quail, which they’d gotten from a farm where the birds were being raised as broilers. They paired off the birds at random, creating 30 male-female couples. Then they placed half the pairs into arranged marriages of sorts, with both birds sharing a cage for six weeks. The other half of the pairs did not live together, but saw each other for a five-minute date three times a week. The birds that lived together formed tight bonds, as they would in the wild. When researchers briefly separated these quail couples, the birds showed "high levels of distress." They ran around their cages, stretched their necks high to search for their partners, and called out for each other. Unsurprisingly, the couples that only saw each other three times a week had no such bond. What the scientists really wanted to know was whether there'd be measurable differences between the eggs—and chicks—that came out of these relationships. Other studies have shown that a mother's environment can affect the eggs or embryos she's growing inside her body. For example, higher-ranking hyena moms have increased levels of androgens (male sex hormones) at the end of gestation, which leads to more aggressive offspring. In birds, a mother's stressful social interactions can have negative effects on her chick's behaviors and abilities; these effects have also been linked to hormones in the eggs. The bond between little penguin parents has an impact on the hatching success of their eggs and the size of their chicks. Once the quail chicks hatched, the researchers put them through a battery of tests. When a chick was trapped in a little box for a minute, and then a researcher opened one side of the box to let it free, how long did the chick cower inside before emerging? When placed in the middle of a wide enclosure, did it freeze in panic? Did it show fear by pacing or pecking the walls? If a big, weird object suddenly appeared on one side of the enclosure, did the chick run to the opposite side in alarm? In all these tests, chicks with bonded parents were less fearful. They popped out of their boxes within a few seconds, compared to half a minute or so for chicks with casually dating parents. They showed fewer fear behaviors when left in an open space, and when facing an unusual object. (This was a yellow-and-black, T-shaped item about 8 inches high.) Rather than showing terror, these chicks were more likely to casually preen themselves during the fear tests. Chicks with bonded parents also seemed more social. While scientists were testing their fear responses, the little birds called out for other quail sooner and more often than chicks with unbonded parents (or, as the title of the paper calls these couples, "sex friends.") Looking for an explanation, the researchers found no difference in egg yolk androgen levels between the two groups of parents. But androgens aren't the only hormones that could be at work. "We hypothesize the involvement of mesotocin and vasotocin," the authors write. These hormones, which are the bird versions of the human hormones oxytocin and vasopressin, are involved in the formation of bonds between bird mates. That's not to mention many more hormones and other molecules that mother birds contribute (involuntarily) to their eggs. Somewhere in those ingredients may be the recipe for a fearless baby bird. The effect could also come from epigenetics—changes to DNA's packaging that alter an individual's traits without changing the genetic code itself. This is a hot area of research in humans too. Whether we're people or quails, it seems we all need to look deeper than our DNA to explain our behaviors. (Assuming we can stop running from giant T's long enough for some introspection.)