Parasitic Worm Treatments Could Soon Be Legal in Germany 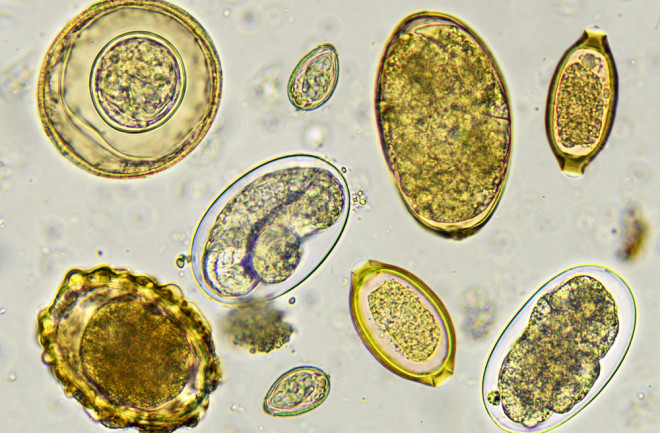 A collection of helminth eggs seen under a microscope. (Credit: By Jarun Ontakrai/Shutterstock) In Germany, treatments for disease may entail adding a vial of parasitic worms to a meal or beverage. The country's food and consumer safety organization is set to weigh in on the relative merits of parasitic worms as a treatment for a range of autoimmune disorders. So called "helminthic therapies" have been slowly gaining ground in the past two decades or so, although the scientific evidence in favor of the treatment is mixed.

If Germany's Federal Office for Consumer Protection and Food Safety allows the worm treatments to hit shelves it will be one of the first countries to do so. In the U.S., the FDA has so far refused to certify helminthic therapies, and Thailand stands as one of the few countries to officially allow the treatment. The parasite in question here is Trichuris suis, a type of whipworm that normally inhabits pigs. It nestles between the large and small intestines in an area called the caecum, where the eggs hatch and mature, latching on to the intestinal walls and eventually releasing more eggs to be excreted by the animal. In humans, the eggs hatch but they don't survive long enough to colonize our guts. Advocates of the treatment say diseases like Crohn's, multiple sclerosis and asthma are so common in the modern world, because we've removed so many of the immune system's common foes that it begins to turn on itself. For evidence, they point to the relative absence of these diseases in less-developed countries.

Because they make their homes within our bodies, human parasites have evolved a range of methods to escape detection by the immune system. For pig whipworms, this entails subtly dampening the immune response in hosts it has infected. Proponents of helminthic therapy believe that this ability can effectively balance out an overactive immune system and prevent it from causing harm to the body. The actual evidence has been mixed so far. One study reported positive effects in Crohn's patients, while another showed promise for treating multiple sclerosis. A study of whipworm treatment for allergies, however, turned up no effect. That hasn't stopped an estimated 7,000 people from undertaking the treatment themselves, though, faced with difficult-to-treat conditions and not content to wait for official approval. While parasitic worm infections can cause death if they are serious enough, the worms and their side effects are readily treatable in the first world. Some common side effects include diarrhea, anemia, fever and weight loss, although this species of whipworm, because they preferentially infect pigs, may not cause any of these symptoms. If Germany approves the worms, they will be officially recognized as a food ingredient, New Scientist reports. While some experts disagree, if done under careful supervision by a doctor, there seems to be little cause for concern. For autoimmune patients, then, their next meals could come with a side of worms.