"Oh, beauty is a beguiling call to death, and I'm addicted to the sweet pitch of its siren." - Johnny Quid, RocknRolla 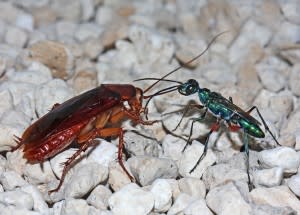 Glinting in shimmering shades of blue and green, the emerald cockroach wasp is surely a thing of beauty, but its shimmering exterior masks its cruel nature. The emerald cockroach wasp is one nature's most impressive neurochemists. At its core, it is a parasite. The female wasp lays her eggs on a cockroach host, and when they hatch, the larvae eat the creature from the inside out. You'd think the cockroach would be opposed to this idea, but instead the insect patiently awaits its fate while the larvae mature. Cockroaches are much larger than even a full grown wasp, and certainly could put up a fight, but that is where the wasps' ingenious manipulation of neurochemistry comes in. When she encounters a potential host, the female cockroach wasp first stings the cockroach in its abdomen, temporarily paralyzing its front legs and allowing the wasp to perch precisely on its head. She then stings the roach again, this time delivering venom directly into a part of the roach's brain called the sub-esophageal ganglia. This doesn't kill the roach. Instead, it puts the roach in a zombie-like trance. The roach is less fearful and loses the will to flee. It allows the wasp to lead it by its antennae, like a dog on a leash, to the wasp's burrow where the roach will play the martyr for the wasp's unborn children. Even though the roach is fully capable of locomotion during the week to month that passes from when the wasp stings the its brain until the hungry brood finish eating it alive, the zombified insect doesn't move. Emerald cockroach wasps have elevated neural manipulation to an art form to create perfect living incubators. But, though the roach has been rendered harmless, the wasp-to-be is threatened by other organisms. Humans aren't the only species that have to worry about their food spoiling—so do emerald cockroach wasps. Cockroaches truly are dirty creatures, and their insides are home to a suite of bacteria that can harm the wasp's vulnerable larvae. One of these potential threats is Serratia marcescens, a vile sort of Gram negative bacteria found in cockroach bodies. It's the same bacteria responsible for a number of human urinary tract infections and the weird pink stains that form in our toilets and showers. In insects, its effects are much more deadly. The bacteria possess a suite of protein-degrading enzymes that cut apart fragile larval cells. The larvae aren't entirely defenseless, though—as a new study published today in the Proceedings of the National Academy of Sciences reveals, larval wasps sterilize their food by secreting antimicrobial compounds. For many parasitic wasps, microorganisms are a serious concern. Studies on another wasp

, Microplitis croceip, found that contamination with Serratia marcescens can lead to a 25% reduction in successful parasite emergence, and even the young that do survive can be infected. When adults are exposed to the bacteria, almost 80% die. The emerald cockroach wasp must defend against this mortal enemy, or pay the ultimate price. But how do you protect yourself against bacteria that live inside your food? Well, you do what we do to foods that house potentially harmful pathogens: you sterilize them. 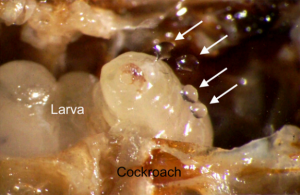 Gudrun Herzner and a team from the University of Regensburg in Germany noticed that larval wasps secrete droplets from their mouths that they disperse around before they feed on their cockroach meal. They suspected these secretions kill off potentially deadly bacteria, allowing the larvae to eat in peace. The researchers tested the antimicrobial activity of the oral secretions to see if they were right. When added to bacterial cultures from the cockroach, the droplets killed off a wide variety of bacteria, including the potentially deadly Serratia marcescens. But the team wanted to know more: exactly what in the droplets killed off bacteria? So, the researchers isolated the secretions and ran them through gas chromatography–mass spectrometry to determine the nature of the substances in them. They found nine compounds previously unknown from the wasps or the cockroaches. In particular, the secretions contained a large percentage of two compounds, a kind of mellein called (R)-(-)-mellein, and micromolide, a natural product that may hold the key to treating drug-resistant tuberculosis. Both compounds showed broad-spectrum antibacterial activity, and the combination of the two was particularly effective. As a final test, they extracted parasitized and unparasitized cockroaches and looked for these compounds. From the parasitized cockroaches, the same antimicrobial mixture could be extracted, but not from unparasitized ones. Thus, the scientists were confident that the wasp larvae produce and use these compounds to sterilize their food from the inside out. "We found clear evidence that A. compressa larvae are capable of coping with antagonistic microbes inside their P. americana hosts by using a mixture of antimicrobials present in their oral secretion," write the authors. While both compounds used by the larvae have been found in other animals, never before has the combination been discovered, in insects or otherwise. The broad-spectrum nature of these antimicrobials may be key to the wasps' success. "Food hygiene may be of vital importance, especially to the vulnerable early developmental stages of insects," explain the authors. "The range of microbes that A. compressa larvae may encounter during their development in their hosts is unpredictable and may encompass all different kinds of microbes, such as various Gram-positive and Gram-negative bacteria, mycobacteria, viruses, yeasts, and ?lamentous fungi." It would be vital, then, that the antimicrobial compounds produced by the wasps are able to fend off a wide variety of potential contaminants. "The secretion of a blend of antimicrobials with broad-spectrum activity seems to represent an essential frontline defense strategy." These beguiling wasps not only have mastered neurochemistry, they have aced microbiology to become proficient parasites. Already, this tiny wasp has given us great insights into brains through the study of its particularly effective zombification strategy. Now, it is shedding light on another field of science. This study is one of the first to suggest that larval parasites possess the ability to protect themselves against microbial pathogens, but the authors suspect many species of insects may have similar strategies. These small creatures may prove a vital new resource for natural products to fight against human diseases. Who knows what other pharmaceutical secrets are being kept by insects like the emerald cockroach wasp, and what ailments we might be able to treat with their chemical arsenal. Citation: