Parasitic Wasps Got Their Poison From an Ancient Virus 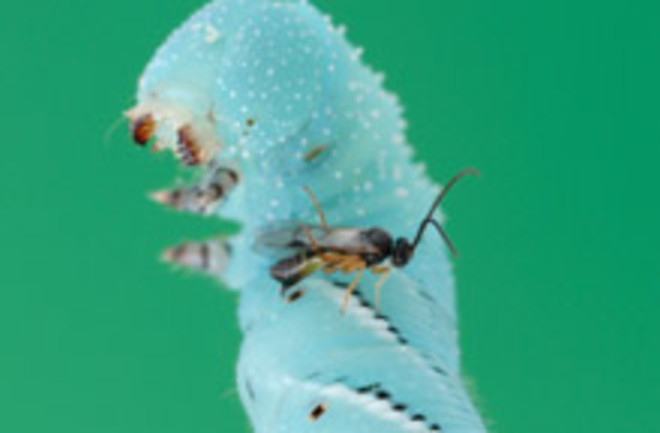 In a classic tale of symbiosis, researchers have determined that a parasitic wasp got its most potent weapon from an ancient virus that may have attacked it around 100 million years ago. When a parasitic wasp wants to lay its eggs in a caterpillar, it takes steps to ensure that everything goes according to plan: Along with the eggs, it injects a powerful dose of virus-like particles.

Not only do these disable the caterpillars' immune system to stop it attacking the eggs, they also cause paralysis and keep the host from pupating – turning the caterpillar into an eternally youthful larder and nursery for the wasp grubs [New Scientist].

But the nature of the wasp's poison has been a subject of debate. The virulent particles, were named polydnaviruses because they resemble viruses; they consist of protein-encased, double-stranded DNA pieces. But their DNA doesn't match that of any other known virus, and a closer analysis showed that the particles contained mostly wasp DNA. That had entomologists wondering if the wasps had come up with the virus-imitating particles themselves.

"The spectre arose that the wasps were doing really clever genetic engineering that looks just like a virus but is really a wasp invention" [New Scientist],

explains lead researcher James Whitfield. To clear up the confusion, researchers studied the ovaries of female wasps, where the particles are produced. In one species of wasps, researchers found that

22 genes matched those of an ancient family of viruses called nudiviruses.... Further experiments showed that these genes code for key structural proteins in the wasps' polydnavirus toxins [ScienceNOW Daily News].

As the researchers explain in Science, this implies that the wasps were attacked by a nudivirus millions of years ago, but found a way to turn the situation to their advantage. The genes that were derived from the nudivirus produce proteins that form the virus coat, as well as those that

package DNA into virus particles. Viruses usually stuff their own DNA into these capsid shells.... The wasps, it seems, have hijacked the entire system to shove [their] genes into the virus particles [New Scientist].

The wasp's toxic particles can't really be considered viruses, researchers say, because they're not independent actors; over time, the viral DNA had become fully integrated into the wasp genome.

Sounds like everyone's getting something good out of the arrangement--except the caterpillars. Related Content: 80beats: Tricky Caterpillars Impersonate Queen Ants to Get Worker Ant Protection DISCOVER: Zombie Animals and the Parasites That Control Them (photo gallery) Image: Alex Wild/myrmecos.net