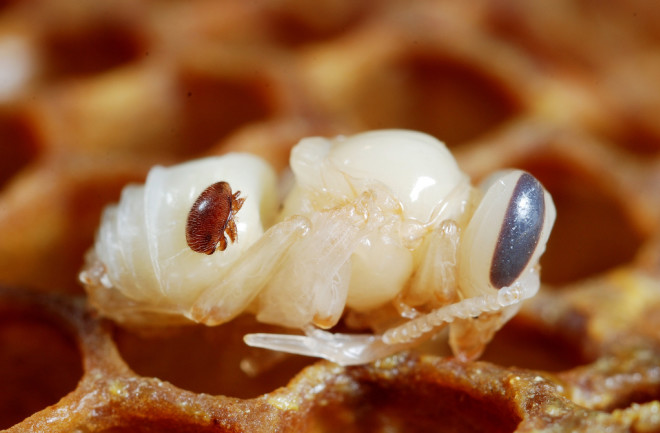 Bad news for honeybees: Their biggest enemies are also masters of disguise.

An abundance of factors are contributing to the rapid decline of honeybee populations, but a tiny mite with a name suitable for a super villain, Varroa destructor, may be terrorizing the bees the most. And recently scientists discovered that these mites have a super power: They can customize their chemical scents to match different species of bees in order to remain undetected within the colony.

Varroa mites are a serious threat to bee colonies because they target bees even before they’re fully grown. While larvae wriggle in their hexagonal cells, Varroa mites are busy sucking their hemolyph, or blood, for sustenance. Mite feasting sessions leave open wounds on victimized bees, which makes them more susceptible to infections and hampers their development.

As bees grow up, the mites continue to latch on for a free ride and fast food. In the long term, mites undermine the health of so many bees that the entire colony eventually perishes.

So how do these mites get away with such nefarious deeds? They smell like bees. In the insect world, a scent is the equivalent of an identification card. Smell helps bees keep track of friends and enemies alike. Past research has shown that Varroa mites use a chemical cocktail to mimic the scent of bees to pose as friends. But that’s not all. A new study published in the journal Biology Letters, revealed that Varroa mites could also rejigger the chemical mixture of their scent in order to tailor it to a specific bee species.

The experiment was simple: Researchers took mites living on Asian honeybees, the original carriers of Varroa mites, and transferred them onto European honeybees, and vice versa. Transplanted mites, regardless of the bee species they started on, remixed their chemical scent to match the new host, and it only took two or three days to complete the transition.

Mites’ ability to customize their scent could explain how they’ve been able to successfully jump from Asian honeybees to European honeybees so easily and rapidly.

Lately the news for bees has been especially bad. An annual survey of U.S. beekeepers found that they lost 42.1 percent of their colonies during the 12-month period that ended in April. That’s a big deal, since 30 percent of the food we eat relies on bee-assisted pollination. Although scientists don’t know how to best combat Verroa mites, studies like this one give scientists a deeper understanding of their tactics, which could someday reveal a chink in their armor.

Still, it’s an uphill climb for bee colonies around the world. Apart from menacing mites, research has also shown that stress, insecticides, viruses, fungi, malnutrition and other pathogens may be contributing to colony collapse disorder.