Parasites are Destroying the Beaks of Darwin’s Famous Finches

The blood-sucking insects were likely brought to the island by visitors. 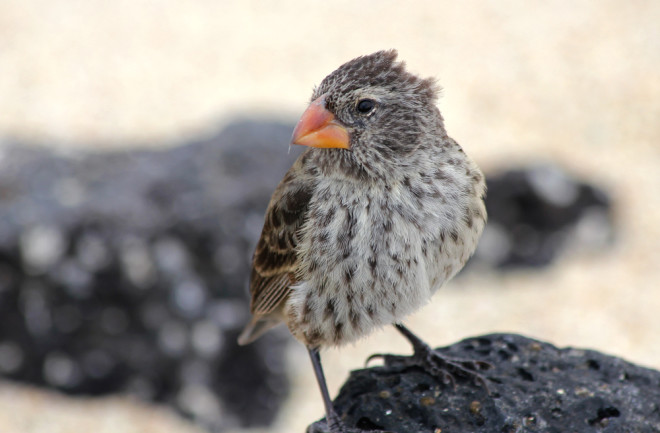 Nearly 200 years ago Charles Darwin voyaged to the Galapagos islands and began to formulate his theory of evolution — largely thanks to his observations of how finches’ beaks varied in shape from island to island. But now, the finches’ famous beaks might be in trouble, thanks to a small, blood-sucking visitor.

An invasive insect, called Philornis downsi, is finding a home in the nests of almost every species of ground bird on the islands, causing serious damage to their populations. The birds are dying in alarming numbers and suffering malformations to one of their most defining qualities — their beaks.

As larvae, P. downsi flies crawl into nests to feed on baby birds. They specifically target the tissue, blood and keratin in their beaks, eating away at their naris, or nostrils. The parasites are estimated to kill more than half of baby birds in nests they infest. And the birds that do survive are often left with malformations to their naris.

Researchers at Flinders University in Adelaide observed the effects of these malformations on the bird’s mating habits. In a study published Wednesday in the Proceedings of the Royal Society B, scientists highlight the vast scope of these nest infestations and point out that even small changes to a bird’s song may alter entire species.

Birds sing to attract mates, but males with malformed nostrils are unable to create their signature mating call. Female birds tend to pick males with a high quality song, defined by longer duration or greater complexity. But damaged equipment can sometimes make these songs a confusing mess.

“Just a slight degradation in the quality of the song is enough to cause confusion,” researcher Frank Sulloway says.

Sometimes that leads birds to mate between species, especially if they are closely related. Sulloway predicts that some species will be more likely to cross-breed as a result of their nostril damage, making the finch population smaller and more homogenous over time. This lack of biodiversity could have drastic impacts on the islands’ ecosystems and other species.

So, how did the parasites get to the Galapagos anyway? Researchers first identified Philornis in a nest in 1997, but think they arrived in the 1960s. The blood-sucking invader has also been identified in Trinidad and Brazil, which leads scientists to believe they were brought to the Galapagos by visitors.

With a boom in island tourism over the decades, it’s no surprise that additional guests are brought along with human visitors. The Galapagos Conservation Trust estimates that over 1500 invasive species are now inhabiting the island.

P. downsi larvae were found on 13 of 15 islands surveyed by the researchers and in the nests of every ground finch they looked at and some seabirds as well. Since finches are known to nest closely together, this makes it easier for P. downsi to move from nest to nest, wiping out large quantities of baby birds.

“It’s a really, really serious problem,” Sulloway says. ““I would say today that it’s the single greatest threat to the [finches].”