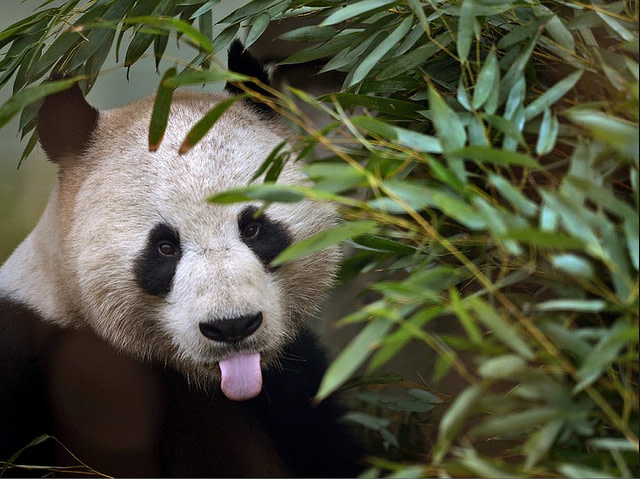 It was a battle fought in the mountains of southwestern China, where patchy forests sustain the last shreds of the wild giant panda population. All at once, intruders began marching in and helping themselves to the pandas' food. The incursion happened far from most human eyes, and the pandas that witnessed it likely didn't know what to think. It's not often that one sees a horse in a bamboo forest. In these woods, the Wolong National Nature Reserve is an important refuge for pandas. About a tenth of the entire wild panda population lives there—although that amounts to only 150 or so animals. They share the space with around 5,000 humans, most of whom are farmers who graze their livestock in designated areas. A new trend emerged among these farmers in the 2000s as they began to do more business with an adjacent township where horses are reared. Though the Wolong farmers had previously raised cattle, pigs, goats, and yaks, they now began buying horses too. "We first realized the problem while we were hiking in panda habitat and conducting habitat sampling for our research in 2009," says Vanessa Hull, a graduate student at Michigan State University. Large areas of forest were "mowed down by horses," she says. "It was honestly a shock to me." When existing grazing areas couldn't provide enough grass for both their cattle and their new horses, the farmers had sent the horses to wander in the forest. There the grazers were happily munching on bamboo—essentially the only thing a wild panda eats. Pandas don't normally have any competition for their food, and Hull worried that the intrusion from horses was driving the vulnerable pandas away. Hull and her colleagues began monitoring four horse herds in Wolong. They put a GPS collar on one member of each of three herds, to track where the herds traveled. They also put collars on three pandas. It was a tiny number of animals, but they felt lucky to even study that many, Hull says, because government protection of the species is so strict. "It is very difficult to get permission to do telemetry research on giant pandas." For a year, the researchers tracked the movements of their animals. They used forest surveys to monitor the movement of the horse herd they weren't able to tag. They also marked off plots of land within the forest and watched them for signs of grazing. With their lawnmower style, horses leave a clear trail where they've been eating; pandas focus on just one bamboo stem at a time. And the researchers monitored parts of the forest for panda feces or other signs that the animals had been around. GPS data revealed that individual pandas lived in ranges of up to 5.6 square kilometers. Three of the four horse herds, they saw, had ranges that overlapped heavily with potential panda habitat. The type of land the horses chose to spend time on—high-elevation, gently sloping, and sunny—is exactly the territory pandas prefer. In about half of the bamboo plots marked off in the forest, horses had eaten 20 percent or more of the bamboo. In a few cases they'd cleared out more than three-quarters of it. And the horses appeared to be driving pandas away: before horses arrived, there were panda signs in 5 to 10 times more plots than there were just a couple of years later. At two "den trees" where panda mothers had been known to raise young in the past, the researchers now found only horse droppings and no sign of pandas. Where horses had invaded their forests, the pandas had dramatically retreated. Besides eating their food, horses might have scared pandas off with their noise or smell. They could also have carried new diseases into the pandas' territory. But the story has, for now, a happy ending. After scientists brought their findings to the management of Wolong, horses were banned from the reserve. "The horses really were removed," Hull says. In the long term, though, the relationship between pandas and humans is still tenuous. "Since people were forced to sell off their horses, they may take up alternative forms of income generation" that may or may not be good for pandas, Hull points out. She hopes there are creative solutions that will let farmers—who are also struggling—coexist with the endangered animals. "The reality is that people living in panda habitat need to survive too."