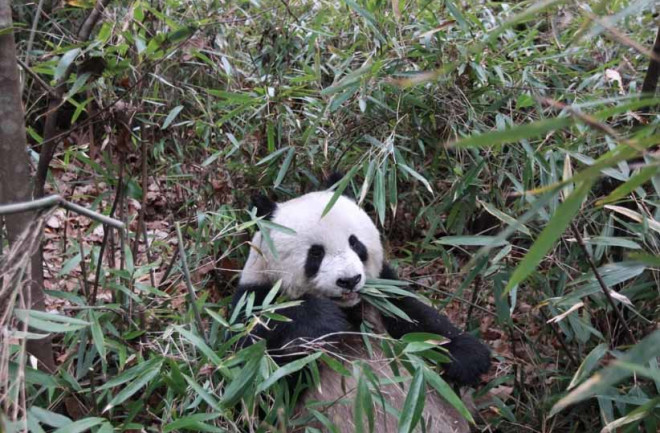 A wild panda feeds on bamboo leaves in Foping National Nature Reserve. (Credit: Fuwen Wei) Ah, giant pandas. Aside from their reputation for being, well, not the sharpest crayons in the box, they’re most closely associated with munching almost exclusively on bamboo. But that taste for bamboo has always stumped researchers. First off, other members of the bear family are either carnivorous or at the very least omnivorous. Plus, despite having evolved specific physical traits, like their strong jaws and pseudo-thumbs, to help them eat bamboo, pandas have what’s essentially a carnivore’s digestive tract. This makes the fibrous plant difficult for them to digest. And recent research hints the bears were still eating meat until some 4,000 to 6,000 years ago. But a new paper out in

claims to have found a possible reason for why bamboo became the food of choice for these weird little derps. Panda Poop Holds the Key The answer was in panda’s poop. Researchers from the Chinese Academy of Sciences and the University of Sydney followed pandas living in the Foping National Nature Reserve in the Qinling Mountains in China. Thanks to the help of some GPS collars, the team tracked individual bears throughout the year, collecting samples of the bamboo that the creatures ate and their fecal matter. After analyzing the samples, the team found some interesting results. It turns out bamboo is a pretty decent source of protein. So despite their largely plant-based diet, in terms of macronutrients — the major nutrients, like carbohydrates and fats, that we need to create energy — pandas are still keeping up with their carnivorous cousins. It’s essentially what human vegetarians do by eating non-meat products that are high in protein, like quinoa and spinach. The bears even adjusted their seasonal feeding habits to feast on the most protein-laden bamboo. From late August to late April, they fed on the leaves of a bamboo species called Bashania fargesii. Then, as young shoots of B. fargesii started sprouting up again in the spring, the bears shifted to those instead. The young shoots have about 32 percent protein, compared to the roughly 19 percent in its leaves. Once the shoots started maturing, the pandas made their way to areas where another species, Fargesia qinlingensis, was more prevalent. The bears pulled the same routine with F. qinlingensis: They first went for the young shoots (approximately 29 percent protein), then, as those shoots matured, they instead started munching on leaves (about 19 percent protein). The fecal samples the researchers collected confirmed the pandas were indeed soaking up a lot of that protein. Compared to other macronutrients, there was less protein left in the dung, indicating that the bears had absorbed most of it to use as energy. This surprising find, the researchers write, could help explain how pandas eventually shifted over to an herbivore diet.