Move over, fossils and DNA. Now, ancient proteins are revealing how creatures, including hominins, lived. 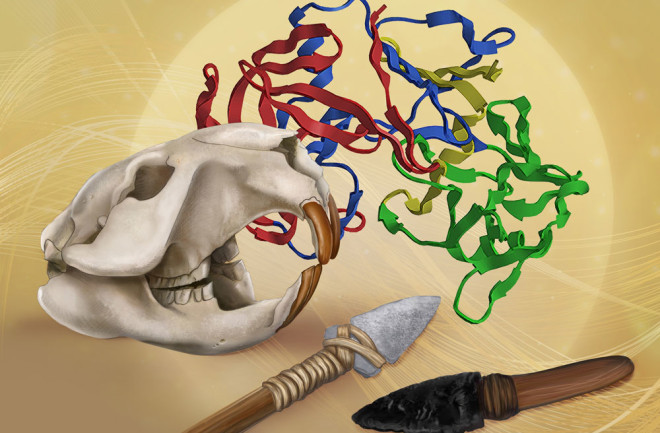 Intricately folded proteins can be preserved in fossils and on artifacts much longer than ancient DNA. (Credit: Cynthia Schroeder; background, Galkin Grigory/Shutterstock)

First came the fossils. Pieced together, sketched and measured, the bones offered our first look at distant ancestors. But it was only a glimpse. Even with today’s highest resolution scans, researchers are limited to studying the structures and shapes they can see.

Then came the extraction and sequencing of ancient DNA (aDNA), which has advanced at a stunning pace. Genomes hundreds of thousands of years old can now be read, at least partially; aDNA has uncovered a new member of our family tree, the Denisovans, and revealed how our own species interbred with both them and Neanderthals.

But the genetic code is fragile and prone to microbial contamination and degradation over time. Researchers cap the potential for finding aDNA, even from an ideal site, at no more than a million years.

Ancient proteins, however, offer the molecular-level precision of aDNA with the sturdy longevity of a fossilized bone. They may be the key to unlocking the secrets of our past.

The Power of Protein

The study of ancient proteins, paleoproteomics is an emerging interdisciplinary field that draws from chemistry and molecular biology as much as paleontology, paleoanthropology and archaeology. Its applications for understanding human evolution are broad: One 2016 study used ancient collagen, a common protein, to determine otherwise unidentifiable bone fragments as Neanderthal; another identified which animals were butchered at a desert oasis 250,000 years ago based on protein residues embedded in stone tools.

Paleoproteomic research can also build evolutionary family trees based on shared or similar proteins, and reveal aspects of an individual’s physiology beyond what aDNA might tell us.

“Every cell in our body has the same genetic blueprint,” says evolutionary anthropologist Frido Welker of the Max Planck Institute in Leipzig, Germany. “If you looked at a liver cell from my body and a neuronal cell from my brain, the DNA would be identical, but the cells themselves would be very different because they are composed of different proteins. The different proteins are the things that make us work as an animal.”

Or as paleoproteomics pioneer Matthew Collins puts it: “DNA is like the Encyclopedia Britannica: It’s got almost everything, all the information, in it. Proteins are more like throwaway cheap newspapers detailing what’s happening at that moment, and repeating it over and over as it happens again and again.”

Thanks to ancient proteins surviving far longer than aDNA — in January, one team claimed to have found evidence of collagen in a dinosaur fossil that’s 195 million years old — researchers are able to read those cheap molecular newspapers from deep time.

The roots of paleoproteomics actually predate its sister field, paleogenomics. In the 1930s, archaeologists attempted (with little success) to determine the blood types of mummies by identifying proteins with immunoassays, which test for antibody-antigen reactions.

A couple of decades later, geochemists found that amino acids, the building blocks of proteins, could survive in fossils for millions of years. But it wasn’t until this century that paleoproteomics established itself as a robust area of research.

In 2000, researchers identified proteins in fossils using a type of mass spectrometer that, unlike earlier methods, left amino acid sequences more intact and readable. Much of today’s research uses a refined version of that method: zooarchaeology by mass spectrometry (ZooMS). Created by Collins and colleagues and first reported in 2008, ZooMS typically uses collagen extracted from a fossil. Unlike costly aDNA research that can take years to complete, ZooMS is as fast as its acronym implies. It has a roughly 24-hour turnaround for results, and is significantly cheaper.

In ZooMS, fossil samples — typically about the size of a breadcrumb — are processed in a way that pulls proteins out, unwinds their folded structures and chops them up. The pieces are applied to a liquid chromatograph, which separates them. The application, by the way, “is the same technique used for painting cars in factories,” says Timothy Cleland, a molecular paleontologist at the Smithsonian Institution who uses ZooMS. “They electrify the parts to be painted, and then, when they spray the paint, the droplets are pulled onto the parts. Though ours is a much, much smaller process, on a nanoscale.”

Fragmented and separated, the bits of protein are then placed in mass spectrometers. “Each amino acid has a different weight, and as the mass spectrometer smashes (the fragments) up, it also measures the weight,” says Welker. “That tells us what amino acids were originally present.”

Researchers feed that raw data into programs that match it with protein sequences to build a species profile.

Use of ZooMS has taken off as scientists test how far the technique can take them. Cleland, for example, was able to identify proteins from a 12,000-year-old giant beaver skull sitting in a museum collection since 1845. His findings suggest that ZooMS can be used to analyze material that has been archived for decades and even centuries.

University of Victoria archaeologist April Nowell led a team that identified protein residues on tools used to butcher animals 250,000 years ago at a site in Jordan. (Credit: April Nowell)

And in 2016, Welker, Collins and colleagues used ZooMS to determine that otherwise unidentifiable bone fragments in the French cave Grotte du Renne belonged to Neanderthals, settling a debate over which member of Homo occupied the site about 40,000 years ago. Given how closely related Neanderthals are to our own species, the researchers’ ability to identify a single protein sequence specific to our evolutionary cousins is stunning.

ZooMS is not a perfect methodology. Analyzing proteins within a fossil requires destroying a piece of the specimen, something unthinkable for precious ancient hominin remains.

That’s why the most significant applications for ZooMS may be to identify fragmentary fossils and to learn more about ancient hominins’ environments — especially the ones they created. In 2016, Collins and colleagues published evidence of proteins on ostrich shells that were almost 4 million years old — the connection to human evolution may not be readily apparent, but such shells have been used by hominins for millions of years to transport water and other resources. The humble ad hoc vessels may hold many secrets about our ancestors.

Collins says he’s also excited about other teams producing paleoproteomic studies on cave art: The research can help us understand how early hominins created paints by adding binding agents to ochre and other material, which hints at their cognitive process.

“It’s not just what the sequences will tell us about us. There are other things to learn about how humans made things,” says Collins.

Another method in paleoproteomics is particularly valuable for understanding the early hominin environment. Like ZooMS, crossover immunoelectrophoresis (CIEP) is fast — researchers get results in two or three days — and cheaper than aDNA sequencing. And CIEP’s results can be equally jaw-dropping.

In 2016, a team led by University of Victoria archaeologist April Nowell and her colleague Cam Walker, a biological anthropologist with Archaeological Investigations Northwest Inc. in Portland, Ore., used CIEP to analyze tools found at a 250,000-year-old animal processing site in Jordan’s Shishan Marsh. The researchers identified six species of animals butchered at the site from protein residues on 20 of the tools.

“It’s the first direct evidence of how the tools were used,” says Nowell. “All of a sudden, a wealth of information is unlocked.”

Detecting species by protein residues on stone tools is especially important for once-marshy sites, like Shishan, which are not conducive to bone preservation.

Although the Shishan excavations have yet to determine which species of hominin was at the site, Nowell’s team found that they were eating everything from Asian elephant and rhino to duck. The diversity sheds light on the hominins’ cognitive skills and ability to hunt very different species.

“It tells us a lot about their social complexity, their technology,” Nowell says. “You don’t go after a duck the same way you go after a rhino.”

Unlike ZooMS, CIEP is noninvasive and nondestructive. Researchers apply antibody-rich blood serum, or antiserum, targeting a specific antigen — say, one found in a rhino — to the sample they’re testing. If the specimen contains rhino proteins, they’ll get a reaction.

Unfortunately, researchers are limited to using antisera collected from living species. That’s why CIEP typically identifies by family rather than genus; genus is deduced later during the study based on knowledge of the animals present at that time and place in the fossil record.

“We’re using modern taxa to find paleotaxa. If something didn’t leave any descendants, we won’t find it,” says Nowell.

But the real problem with CIEP, contend some critics, is more basic.

“Proteins are made up of a series of amino acids that fold into a chain in a structure specific to that protein,” says University of Manchester biomolecular archaeologist Terry Brown. CIEP and similar immunological methods “are based on detecting proteins by using antibodies that would recognize the protein by shape. If they unfold, the antibodies can’t accurately identify them.”

Shishan study co-author Walker, however, dismisses that concern. He says a detection rate of only about 5 to 10 percent is typical when searching for protein residue on artifacts, but he’s confident in those results. Walker cross-tests every antiserum with samples from other species to ensure it’s only identifying proteins from its target, rather than providing false positive results.

“Sure, proteins do degrade, and unfolding can be a part of that process,” Walker explained via email, “[but] a protein does not need to be complete in order to be detected.”

As with any young field of science, there are growing pains. Researchers who use ZooMS tend to question CIEP’s accuracy; CIEP advocates point out ZooMS’ destructive nature.

While Collins says he’s “not a huge fan of CIEP,” he also appreciates that greater collaboration between proponents of various approaches would be a win for all. “Throughout the field, we’ve each got our own hammer — ZooMS, ancient DNA — and to us everything looks like a nail,” Collins says.

As researchers push the limits of ancient protein analysis, it’s possible that methods more refined than either ZooMS or CIEP will emerge.

“We’re such a new field,” says Cleland. “We’re only scratching the surface of what we can do, and what we can learn.”

[This article originally appeared in print as "Beyond DNA."]