Paleopathology: The Hard Life and Times of a Hadrosaur 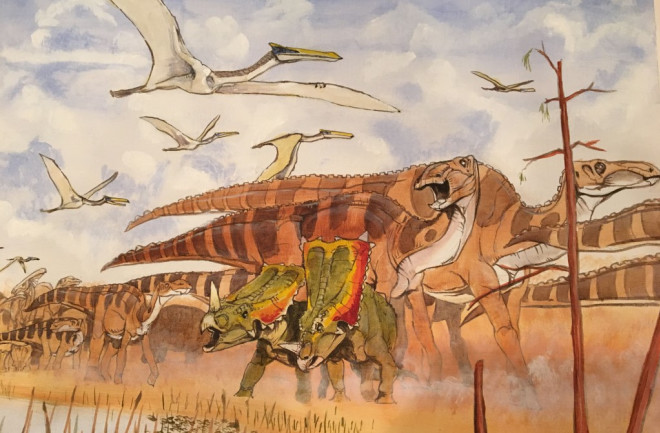 A herd of hadrosaur-like dinosaurs in happier times, frolicking with friends. Why "hadrosaur-like," you ask? Because hadrosaurs themselves are not well known, even though duck-billed dinosaurs, the group to which they belonged, are fairly common in the fossil record. Credit: Jason Poole of the Academy of Natural Sciences at Drexel University. Life was rough back in the Late Cretaceous, some 70 million years ago. The constant threat of predation, the relentless hunt for food, no convenience stores or acute care walk-in clinics. And for at least one particular hadrosaur, a variety of plant-eating, duck-billed dinosaur, things got particularly nasty when it developed septic arthritis in the elbow of one of its forelimbs. But what was a lousy break for a long-dead dinosaur is a boon to science today: X-ray microtomography (XMT) scanning allowed researchers to document this unprecedented paleopathology in fascinating detail, and to use it to further our knowledge of the prevalence of disease in dinosaurs.

The case, the first known account of septic arthritis in a dinosaur, was published today in Royal Society Open Science, complete with scans that capture the horrific nature of the condition. Septic arthritis is basically a super ugly inflammation of a joint. Bacteria that cause the infection either get there through the bloodstream or are introduced when something pointy (like, oh, I dunno, say, a carnivore's tooth) breaks the skin. The infection destroys cartilage in the joint and over time causes all manner of bony deformity.

X-ray microtomography (XMT) scans reveal the extent of septic arthritis in the elbow end of a hadrosaur radius. Credit: Jennifer Anne. In the above XMT image of the radius, the lettered red lines on the left indicate location of the cross-sections. Cross-sections A and B show how growths have completely distorted the bone nearest the elbow joint. In C and D, the normal shape of the cortical bone is still visible — outlined in red — but it's clear the infection has caused deformity here, too. Scans of the ulna revealed similar damage, described in the study as having a "cauliflower-like texture" in some areas. According to the researchers, the extent and severity of the condition suggests the dinosaur had the painful infection for a while. Poor guy, born just 69.99999 million years too early to benefit from antibiotics.

I Pity the Fool with Pyrite Disease

Only the ulna (about 26.5 inches long) and radius (21 inches) of the unfortunate hadrosaur have been found. They were unearthed at a site in New Jersey that has yielded the fossils of other animals. Alas, many of them, like Septicsaurus here, have a kind of fossil pathology: pyrite disease. This condition occurs when pyrite, or "fool's gold," gets incorporated into the bone during fossilization. If the fossil is subsequently exposed to high humidity, it becomes incredibly fragile and prone to crumbling to dust, which is not a bonus if you're trying to study it. Thanks to XMT scans, however, researchers were able to study the fragile fossil and document the condition without any, shall we say, dust-ups. Septic arthritis shows up today in birds, descendants of dinosaurs, and also crocodiles, distant dino-relatives on the archosaur family tree. It also occurs in puny humans, so consider the hadrosaur's hardship a cautionary tale to get that sore elbow checked out.