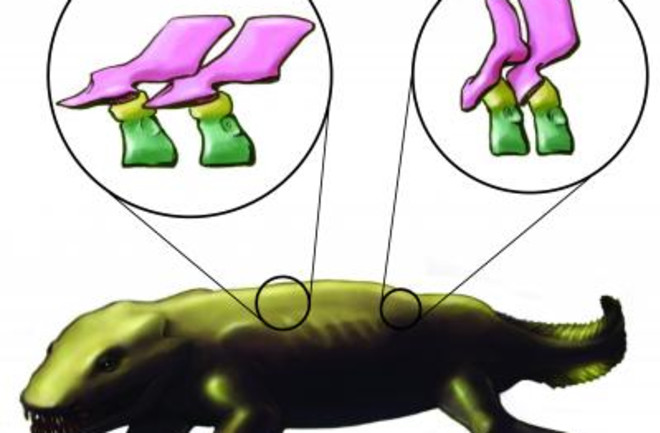 Illustrated version of an Ichthyostega tetrapod, zooming in on the correct orientation of two vetrebrae reconstructed in the study. Credit: Julia Molnar. When the earliest animals hauled themselves out of the ocean and evolved legs, they began flopping and eventually walking down the evolutionary path toward terrestrial life as we know it. The fossil remains of these first four-legged creatures, called tetrapods, have played a crucial role in understanding this sea-to-land transition. The spine is of particular interest, but it turns out that paleontologists had it backward. Tetrapod fossils have long proven difficult to study since the bones often can't be separated from the petrified material that surrounds them. Using a new modeling method, researchers bombarded these 360-million-year-old fossils with high-energy X-rays in order to make 3-D models of the ancient remains. The new method, reported in Nature this week, allowed researchers to isolate the otherwise-hidden bones and see them in their original orientation. The results made paleontologists do a 180. Literally. The previously believed orientation of the backbone was, in fact, backward. Those vertebrae that paleontologists had thought faced forward were actually facing the rear, and vice versa. The skeletons of these first four-legged creatures have long been used to show how the spine evolved. Paleontologists for the last 150 years have therefore theorized about spinal evolution based on an inaccurately pieced-together structure. With the new findings in mind, paleontologists will now need to rewrite the story of early tetrapods and the evolutionary history of the development of other vertebrate species---humans included.