Paleontologists Uncover the First Feathered Dinosaur Fossils in the Americas

A chance find has scientists reconsidering their conceptions of an ostrich-like dino and their methods of fossil preparation. 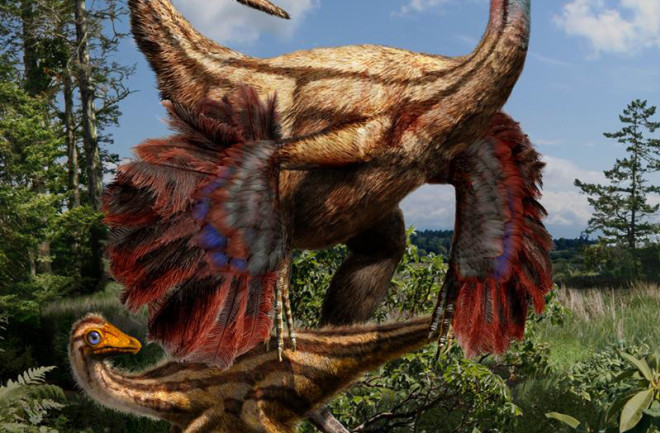 In 2008, a fossil hunter named Frank Hadfield went for a walk among the hoodoos of Drumheller, Alberta. Up on one of these chunky sandstone minarets studding the southern Albertan badlands, Hadfield spied what appeared to be the remains of a small carnivorous dinosaur. He made a few calls and soon his colleague Francois Therrien, a paleontologist at the nearby Royal Tyrrell Museum of Paleontology, to come have a look.

By itself, this was an exciting, though perhaps not momentous, find. Drumheller is located in the heart of what's known as Alberta's Dinosaur Valley, and it got that name for a reason: ancient rivers once coursed through the landscape, their sandy bottoms preserving the bodies of hundreds of the area's ancient inhabitants. Forty dinosaur species were first discovered there, and the valley has been a UNESCO World Heritage site for more than 30 years. But when Therrien got to the site and he and his technicians began to saw the dinosaur out of the hoodoo, something happened that would add another feather, so to speak, to Drumheller's cap.

While they were working on the outcropping, a chunk of it split off the main block. Examining it, Therrien saw it was laced with black streaks. The streaks looked familiar. Like all modern paleontologists, Therrien was acquainted with the spectacular feathered-dinosaur fossils of the Liaoning beds in China, where the idea that dinosaurs are the ancestors of birds got its biggest boost, thanks to the preservation of feathers—both the thread-like ones known as "dinofuzz" and the more familiar shafted kind—in the silky mud of an ancient lake bottom. "If we were in China," he cracked, "we'd call those feathers."

Interest piqued, the scientists changed the way they'd usually prepare the fossil, cleaning it to the level of its skin, rather than down to the bone, to see whether more of the curious features could be found. The work was not in vain. The 2008 specimen, along with another found in 2009, have just been announced in this week's issue of Science as the first feathered dinosaurs to be found in the Americas. The finds may suggest new places to look for feathered dinosaurs, since these were found in stone previously thought to be too coarse for the preservation of feathers. And they may also, along with a newly re-examined specimen found in 1995, provide insight into what role feathers played for animals that did not use them for flight.

The fossils discussed in the paper are of dinosaurs of the species Ornithomimus edmontonicus, which means they looked something like modern ostriches, and are theropods--bipedal and carnivorous—as are most of the feathered dinosaurs already known to science. Hadfield's first specimen is the partial remains of an adult, whose chest, shoulder blades, and back show the telltale black lines that indicate dinofuzz. The 2009 specimen turns out to be a juvenile, just under a year old, judging from its bone growth, and it shows signs of having been coated in fuzz that was plastered against its body after death. "It died and was buried upside down in a river," Therrien says. "It had fallen on the lee side of a dune; the head was down at the bottom of the river, the feet were up."

The finds had implications beyond the obvious. Ornithomimids were first unearthed more than 100 years ago, but paleontologists only learned about the existence of dino feathers 15 or so years ago. And the fact that no one had ever looked for feathered dinosaurs in river sandstone before got the researchers thinking: "What about fossils that were collected 10, 20, 30, 50, 100 years ago?" Therrien says. "If paleontologists had known it was possible to preserve impressions of soft tissue in sandstone, well, maybe these other specimens were covered with feathers, and they were just destroyed during preparation."

Their attention turned to a well-known ornithomimid fossil on display in the Royal Tyrrell Museum, an adult found in 1995. It had already been cleaned down to the bone, but there were mysterious dark marks on one of its arm bones that have never been adequately explained. After looking through the ornithology literature, Therrien says, the team concluded that the spacing of the dark marks looked very much like the distribution of the large, shafted feathers on the wings of an ostrich.

If that's indeed what they were, it would suggest not only an earlier origin for such shafted feathers among this group of dinosaurs, but also a new interpretation of their purpose. The adult remains found in 2008 don't include arms, so the team can't look there for more information, but the juvenile, whose arms were intact, showed no such structures. If large arm-feathers a sort of proto-wing—developed only once adulthood was reached, that implies that they weren't necessary for the young animal's day-to-day survival, says lead author Darla Zelenitsky, a paleontology professor at University of Calgary. That's in contrast to modern birds, whose soft covering of down gives way to shafted feathers very early in life. And if they weren't necessary for survival, perhaps shafted feathers were used for activities only adults would engage in, like mating behavior.

Yale professor of ornithology Richard Prum, who has studied the feathers of Liaoning dinosaurs along with numerous aspects of avian behavior, thinks this is plausible. He is not completely sold on the evidence for shafted feathers—though he does find the comparison to the patterns of ostrich feathers apt. "What would be more convincing," he says, "would be a beautiful fossil with big, long beautiful feathers hanging off the arm. It's possible that aspects of their story could be reinterpreted in the future in a new way." But he is excited by the idea that this could represent a use for feathers that is not locomotion.

It's already clear that most feathered dinosaurs, strong as they were, were not fliers, and various theories have been floated as to what role the feathers played. Dinofuzz could conceivably have provided insulation. Shafted feathers, though, are a bit more of a puzzle—one current theory is that, on outstretched arms, they might have helped stabilize running dinosaurs as they hurtled across the plains. But the idea that they could have had a use in communication is neat: we have very little insight into the social behavior of dinosaurs, and if more finds produce evidence that shafted feathers grew exclusively on ornithomimid adults, then paleontologists might be able to craft a theory that focuses on communication and signaling.

The search for more feathery fossils has already begun. "I've been out this summer looking for more, and the museum is probably looking as well. I'm sure lots of people will be looking once this paper comes out," Zelenitsky says. "And I think people will start looking through their collections, and start preparing fossils that haven't been prepared."

At least now we know that you can find feathered dinosaurs anywhere, Therrien says. And he emphasizes that people will have to be careful: "If it hadn't been for that lucky break, I'm convinced that we would have never found those feathers. We would have just prepared through them." In this case, preparing through them would have meant losing them—and losing a discovery too.

This story also appears at TIME.com.