Paleomythic: How People Really Lived During the Stone Age

A growing movement seeks to reproduce the hunter-gatherer lifestyle: running barefoot, pondering polygamy, relying on a diet of meat. But even our ancestors never lived this way. 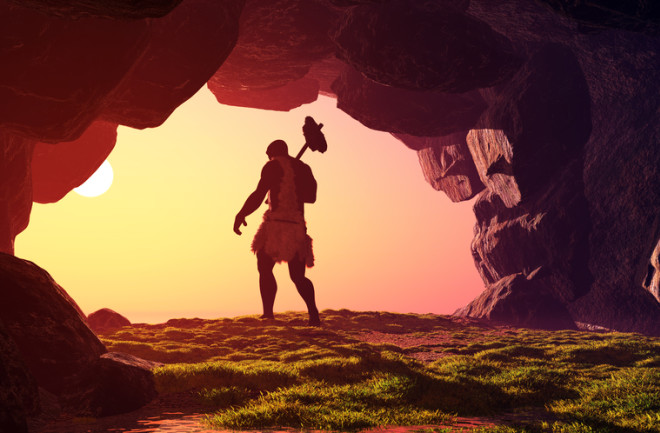 The Paleo diet is just the beginning. It’s the gateway to an entire suite of lifestyle prescriptions devoted to mimicking the way our ancestors ate, moved, slept, and bred nearly 10,000 years ago in the Paleolithic era of hunting and gathering, an era Paleo followers associate with strong bodies and minds.

Members of this modern-day caveman community believe the path to optimal health is through eating only what our ancestors ate before modern agriculture and a shift to more sedentary ways. Devoted proponents of a Paleo lifestyle not only subsist primarily on meat and eschew carbs; they also exercise in short bursts of activity intended to mimic escaping prey. Even blood donation has become a Paleo fad among the most dogmatic of 21st-century cavemen, based on the notion that our ancestors were often wounded, making blood loss a way of life.

But new research reveals flaws in the logic behind these trends. As evolutionary and genetic science show, humans, like all other living beings, have always been a work in progress and never completely in sync with the natural world. If we’re going to romanticize and emulate a particular point in our evolutionary history, why not go all the way back to when our ape ancestors spent their days swinging from tree to tree?

It is hard to argue that a simpler life with more exercise, fewer processed foods, and closer contact with our children may well be good for us, but rather than renouncing modern living for the sake of our Stone Age genes, we need to understand how evolution has — and hasn’t — suited us for the world we inhabit now. — Tasha Eichenseher

Modern mimic: The first formalized suggestion that we should be relying on meat and modeling ourselves, at least food-wise, after our cave-dwelling ancestors came from The Stone Age Diet, a 1975 book by gastroenterologist Walter Voegtlin. Its more recent successors include The Paleo Diet, The Primal Diet, and The Paleo Solution: The Original Human Diet. These diets differ in their details but share an emphasis on meat and strictures against virtually all carbohydrates, sweets, and processed foods. The problem, claim Paleo followers, is that humans have not, in the past 10,000 years, adapted enough to safely consume grains.

Science weighs in: Bold declarations that our ancestors exclusively consumed meat turn out to be untrue. Studies of fossil hominins suggest that their sturdy premolar teeth may have been used either to open seeds or chew starchy underground tubers and bulbs. In late 2010, scientists detected bits of plants, including cattail-like roots, on the grinding stones from 30,000-year-old archaeological sites in Italy, Russia, and the Czech Republic. They concluded that our ancestors were mixing the ground-up plants with water to make a pita bread of sorts.

Katherine Milton is an anthropologist at the University of California, Berkeley who has studied and written extensively about the diets of hunter-gatherers and ancient humans. She points out that “it is difficult to comment on ‘the best diet’ for modern humans because there have been and are so many different yet successful diets in our species.”

Furthermore, “because some hunter-gatherer societies obtained most of their dietary energy from wild animal fat and protein does not imply that this is the ideal diet for modern humans, nor does it imply that modern humans have genetic adaptations to such diets.”

The notion that humans got to a point in evolutionary history when their bodies were somehow “in sync” with the environment, and that at some time after that point—whether due to the advent of agriculture, the invention of the bow and arrow, or the availability of the hamburger — we went astray from those roots reflects a misunderstanding of evolution.

What we are able to eat and thrive upon depends on our 30 million years plus of history as primates, not a single arbitrarily more recent moment in time.

Paleofantasy: Our ancestors’ lives revolved around sprinting barefoot after prey.

Modern mimic: On his blog, Evolutionary Fitness, Paleo lifestyle coach Arthur De Vany emphasizes exercises that he feels emulate “the activities that were essential to the emergence and evolution of the human species.” He goes on to explain: “High intensity, intermittent and brief training mixed with power walking and play is closer than aerobic exercise, high-volume weight training, or sedentism to how our ancestors lived.”

Science weighs in: De Vany and other Paleos are in direct opposition to a growing number of scientists and athletes who believe that running long distances can be healthy, and that humans may have evolved doing just that.

We are surprisingly good distance runners, with numerous skeletal features that allow us to accommodate a marathon-like pace. Some scientists suggest that our skills evolved in the context of persistence hunting — or running down prey by keeping it moving until it dropped from heat exhaustion.

According to Greg Downey, an anthropologist at Macquarie University in Australia, “long-range endurance running wouldn’t have just been for hunting: Humans cover immense ranges, even when foraging and scavenging.”

Regardless of whether we evolved running short distances or long ones, we certainly did not evolve to run, or walk, with shoes. Some evidence suggests that heavily structured and padded shoes actually increase injuries rather than prevent them, resulting in a growing cadre of barefoot runners, or at least runners who wear “minimalist” shoes.

The key may lie in how a runner’s foot strikes the ground; experienced barefoot runners tend to hit the ground with the forefoot, with occasional midfoot or heel strikes, whereas shoed runners are predominately heel strikers. It’s the forceful collision of the latter, Harvard University biologist Daniel Lieberman claims, that causes runners the most harm. If a runner takes off his or her shoes but doesn’t adjust technique, injuries are still likely.

The larger lesson here is that all of our traits, even those influenced by our genes, are affected by our surroundings. A child who goes barefoot will end up with differently shaped feet than one who wore cute tiny sneakers.

Paleofantasy: Monogamy is out. Multiple partners are in.

Modern mimic: Some Paleo lifestyle advocates are skeptical of monogamy, pointing wistfully to a time when, as one commenter wrote on Paleohacks, a website that answers questions about modern-day cavemen and cavewomen: “Sex was a lot more egalitarian and promiscuous than you’d think it was.”

Science weighs in: Although monogamy is rare among mammals, it does exist. Species that mate for life usually have offspring that, like our own, require a great deal of care. Behavior may not fossilize, but bodies do, and we can infer a surprising amount about behavior from those remains. Species with more male competition, and more polygamy — where males have more than one female mate at a time — are likely to show a greater difference in body size between the sexes.

Humans, along with chimps and bonobos, have much more modest size differences between the sexes, which has led many researchers to conclude that our ancestors were only moderately to slightly polygamous. Monogamous marriage as we now know it was thought to have become more prevalent once societies became more complex and agricultural and less nomadic.

Modern mimic: Modern-day Paleo mothers practice “attachment parenting,” “baby-wearing,” and “co-sleeping” in the hopes of caring for children in more “natural” ways. A contributor to The Progressive Parent blog notes in a post related to Paleo parenting: “Hospital births, infant formula, strollers and other commonplace items in the lives of most American infants are conveniences parents have done without since the dawn of time — until the last century.”

Science weighs in: Undeniably, human infants and their mothers form a close bond. But that bond is not, and maybe should not be, the only one that supplies the child’s needs. In other words, a harried mom seeking help from anyone who is available is not unusual, or a product of a 21st-century life. That helper could have been the father, but fathers, just like today, were not always available.

Anthropologist Sarah Blaffer Hrdy suggests that women evolved to be opportunistic in their use of others as alloparents — or people who help out with child care. Sure, dad is fine, but if he dies, disappears, or simply can’t come up with the meat that day, help from others should be perfectly acceptable, and it is in many parts of the world.

Studies of children reared with multiple caregivers — not in an atmosphere where babysitters come and go, but one with two parents and a grandmother, or a mother, a couple of aunts, and an older sibling — support this idea. Hrdy summarizes a series of studies of Israeli and Dutch children raised either mainly by their mothers or by mothers and other adults by saying, “Children seemed to do best when they have three secure relationships — that is, three relationships that send the clear message, ‘You will be cared for no matter what.’ ” Not one, not even two, but three.

Paleofantasy: Cancer is a modern scourge.

Modern mimic: On Mark’s Daily Apple blog — a Paleo lifestyle forum — a commenter optimistically proclaims that the “high animal fat, low carb Paleo/traditional whole food diet … protects against all cancers” because it strengthens the immune system and makes the body strong. Paleos often believe that agriculture leads to illness, by promoting a diet of grains and other processed foods, and that cancer is a recent aberration.

Science weighs in: Not just our lives but also our genes have changed in the 10,000 years since agriculture, making us different in many ways from our Paleolithic ancestors. The truth, though, is that diseases have always been with us, modern only in the sense that some of them accompanied our evolution into human beings.

Searches for cancer in ancient remains are plagued (no pun intended) by sampling errors — the signature of cancer can be detected in bones, but many skeletons are incomplete, and of course cancers do not always spread to bone after they originate in soft tissue. The person could die before such metastasis occurs. What is more, most cancers appear in older people, so a sample needs to include enough of the over-50 crowd to have a hope of detecting many cancers at all. When you account for these biases in the fossil record and consider that rare cancer-ridden ancient skeletal remains have been found, the data suggest that, apart from tobacco-related lung cancers, cancer rates in ancient peoples, and probably in our ancestors as well, are not too different from those we find today.

Although it is true that some aspects of modern life can increase cancer, as Andy Coghlan in New Scientist put it, “most of them are down to poor lifestyle choices that people can do something about, not, as implied, because they are drowning in a sea of carcinogens from which there is no escape.” Smoking, of course, is primary among these, and causes about a quarter of all cancer cases in the world.

Adapted from Paleofantasy: What Evolution Really Tells Us About Sex, Diet, and How We Live by Marlene Zuk. Copyright © 2013 by Marlene Zuk. With the permission of the publisher, W.W. Norton & Company, Inc.
1 free article left
Want More? Get unlimited access for as low as $1.99/month
Subscribe