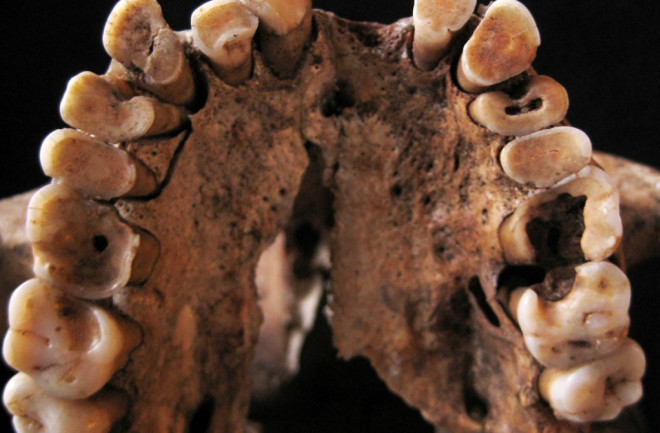 From a site in Morocco and dated to more than 14,000 years old, these teeth are riddled with cavities and other signs of oral disease. That's what you get for not flossing. Image courtesy of Isabelle De Groote. Had they existed, we're betting four out of five Pleistocene dentists would have recommended chewing fewer nuts and acorns. A new study finds that prehistoric humans had as many cavities as modern people. Tooth cavities in humans have long been associated with eating carb-rich foods: Bits of the carbohydrates get stuck on teeth, creating a happy environment for bacteria, which produce acids that cause tooth decay. Researchers had theorized that cavities were tied to the advent of agriculture, when humans began eating more grains and processing their food more than earlier hunter-gatherer societies did. New research suggests, however, that cavities and other forms of oral disease have been a pain in the mouth for our species for much longer. The rate of cavities in teeth from North African hunter-gatherers more than 14,000 years old was comparable to that of modern industrialized populations chomping on doughnuts and gulping sugary sodas.

Researchers focused on a Moroccan site called Grotte des Pigeons because of its combination of both multiple human burials and middens. The middens, basically trash heaps full of plant and animal material, were exceptionally well-preserved thanks to the site's extremely low humidity. Sorting through the trash allowed researchers to reconstruct the diet of the humans buried at the site with a good degree of certainty. More than half of adult teeth studied from the site had cavities. Only three of the 52 adults examined showed no evidence of tooth decay. And nearly 60% of the adult teeth showed signs of periodontal disease, resulting in exposed roots. The paper appears in today's Proceedings of the National Academy of Sciences.

Seeds — It's What's for Dinner

Holm oak (Quercus ilex L.) acorns and Maritime pine (Pinus pinaster Aiton) nuts were the most abundant edible plant remains found in the site's middens, though wild oats, pulses and pistachio nuts were also found. Researchers concluded that acorns and pine nuts, which can be stored for long periods and are high in nutritional value, were a diet staple of the hunter-gatherers. The acorn and pine nut remains found were mainly the plants' inedible debris, such as shells, rather than charred seeds, suggesting the food was eaten raw and unprocessed. Acorns and pine nuts, as well as pulses and oats, are high in carbohydrates. Eating them created the perfect environment for decay-causing bacteria in the mouths of the hunter-gatherers. Land snails were another diet staple for the population, and researchers theorized that gritty particles in the snails may have increased tooth wear and accelerated cavity development. Still, the high rate of oral disease at Grotte des Pigeons came as a surprise to researchers. A 2010 study of early hunter-gatherers in Peru had revealed cavities in less than 15 percent of teeth examined. Authors of today's study say that other, as-yet-unknown factors might explain the prevalence of cavities in the North African population, including peculiarities of culture or the presence of particularly virulent strains of bacteria.