Our First Date Out of Africa?

Neanderthals and Homo sapiens were hooking up over 100,000 years ago. 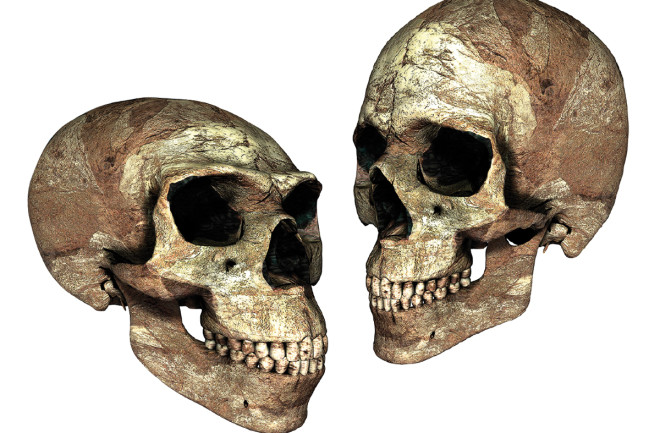 Neanderthals (left) and Homo sapiens (right) were hooking up more than 100,000 years ago. | Friedrich Saurer/Science Source

When researchers looked at the genome of a Neanderthal from Siberia, they saw DNA that did not belong.

“No matter how we tried to fix it, it didn’t go away,” says Ilan Gronau, a computational biologist at Israel’s Herzliya Interdisciplinary Center. He was part of a team applying new methods of data analysis on previously studied genomes, and initially thought the unexpected DNA was a glitch. “[Then I thought] maybe this is real and maybe it tells an interesting story that just hasn’t been told until now,” he says.

That story was an undetected affair in human evolution.

We already knew that, after leaving Africa roughly 65,000 years ago, modern humans interbred with Neanderthals — it’s why most present-day humans have about 2 percent Neanderthal DNA. What Gronau and colleagues discovered, and published in Nature in February, is that Neanderthals also mated with our species some 50,000 years earlier.

They identified DNA in the Siberian Neanderthal that was inherited from a group of modern humans, now extinct, who apparently left Africa more than 100,000 years ago. Such a group previously had only been hypothesized based on ambiguous fossils and artifacts, mostly from the Middle East. Coincidentally, that’s the farthest south that Neanderthals appear to have traveled; researchers believe they evolved in Europe and never reached Africa.

The genius of these new computational methods is their ability to detect unknown episodes of mating and infer a complete demographic history. Says Gronau: “Evolutionary history is riddled with curious things that people are not even thinking of yet.”