Our Eyes May Hold Evolutionary Secrets

Some scientists think that a unique feature absent in other primates has helped humans communicate. 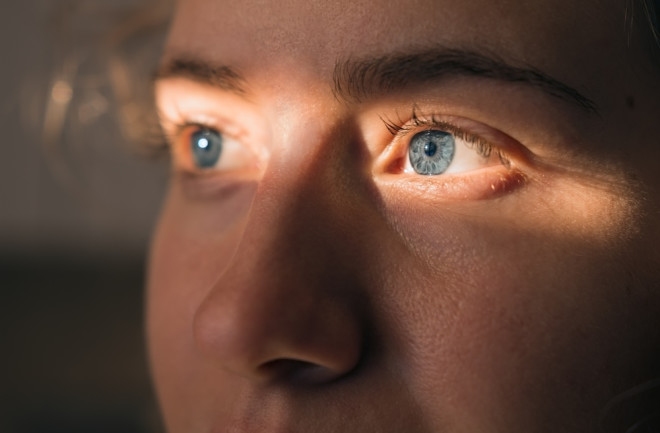 “These lovely lamps, these windows of the soul,” the French poet Guillaume de Salluste Du Bartas wrote in 1578. He was, of course, referring to eyes. A decade later, “windows of mine eyes” was echoed by Shakespeare. These writers weren’t the first (nor the last) to note just how much our peepers can reveal.

We know now that many features of these sensory organs have evolved for vision. That’s why human eyes are largely similar to those of other primates. For example, we share black pupils that serve as openings for light.

But peoples’ eyes are unique due to the vast white expanse that surrounds irises and pupils. The white part of the eye is known as the sclera, and it may aid in behaviors that make us distinctly human.

Among other primates, sclerae are often dark or patchy and mostly hidden under the skin, unlike in the elongated human eye. Some people do have darker sclerae that aren’t explained by an underlying condition, though this is rare. Researchers have proposed that visible white sclerae evolved to signal health to potential mates. However, this would also prove useful for other primates and doesn’t explain why white sclerae are specifically important for us Homo sapiens.

Perhaps the poets were right all along: Since the late '90s, mounting evidence has suggested that the whites of our eyes evolved to help us communicate, also known as the cooperative eye hypothesis. The high contrast between the white sclerae and darker iris make a person’s gaze more visible, which can be beneficial in a cooperative society: If you gaze at food and others catch on, everyone can enjoy the spotted bounty.

But how exactly do we know where someone else is looking? And how do other primates' perception compare to that of a human? Psychologist Michael Tomasello and a team at the Max Planck Institute set out to answer these questions in a 2007 Journal of Human Evolution study.

The team asked a human experimenter to peer at the ceiling while sitting near an infant or an ape. If he looked up with only his eyes, they observed that human babies would also peer up, but chimpanzees wouldn’t. While eyes didn’t matter to chimpanzees, they would follow if the experimenter tilted his head up (even if his eyes were closed). This research suggested that we have different inclinations from chimpanzees, but it wasn’t clear whether the whites of our eyes play a role.

More recent research probed whether contrast really is key. “The critical thing is that we've analyzed eye colors, but we haven't measured how we respond to eye colors,” says Fumihiro Kano, a comparative psychologist at University of Konstanz.

To measure this response, Kano presented human and chimpanzee participants with a computer screen displaying slivers of human or chimpanzee faces. Subjects of both species were asked to indicate where the eyes were looking. It turned out that both the humans and chimpanzees could more easily follow human eyes, as reported by Kano and his team in an eLife study published last month.

The researchers then manipulated the images to appear as if they were taken far away at night. In these conditions, humans and chimpanzees struggled with following chimpanzee eyes, but could still tell where human ones were gazing.

So if contrast really is the essential piece, the team figured, people should be able to follow any eye with high contrast. They edited photos of chimpanzees to give them white sclerae. It turned out that both humans and chimpanzees could follow the direction of these humanlike eyes with ease.

But to support communication, the whites of human eyes must be paired with the cognitive ability to glean where exactly someone is looking. Beyond their proclivity for following heads, chimpanzees don’t track eyes naturally and are more adept at following an individual’s head tilt. The researchers trained 10 chimpanzees for several months in preparation for these experiments, and only three successfully learned how to track eyes.

“There’s something naturally easy for us about following human eyes,” says Tomasello, who is now at Duke University. And we can imagine why we’d develop the ability to follow someone else’s gaze, he adds. However, for the sclerae to evolve to be white, this feature had to be mutually beneficial and facilitate cooperation between humans.

Just as the purpose of this distinctive feature is unclear, we also don’t know when it emerged in people. Eye color can’t be observed from the bones of our ancestors, so the answers may lie in ancient DNA. If scientists can identify the genes that lead to white sclerae, we could learn if ancient humans also had high-contrast eyes, says Kano from the University of Konstanz.

Learning when white sclerae appeared in human history could also reveal their role in communication. “I wouldn’t be surprised if white sclerae appeared after language, or before, if gestures preceded language,” says Kano. When babies observe people talking, they glean information based on where the speaker is looking. White sclerae could therefore lend a hand in language acquisition, especially if infants are predisposed to follow one’s gaze.

All in all, we can’t be certain that this trait evolved for tracking each other’s gaze since we can’t observe how ancient humans communicated. However, we can take note of all the ways people follow each other’s eyes today. From askew glances to meaningful eye contact, tracking eye movements has remained a versatile form of human communication in the age of smartphones.