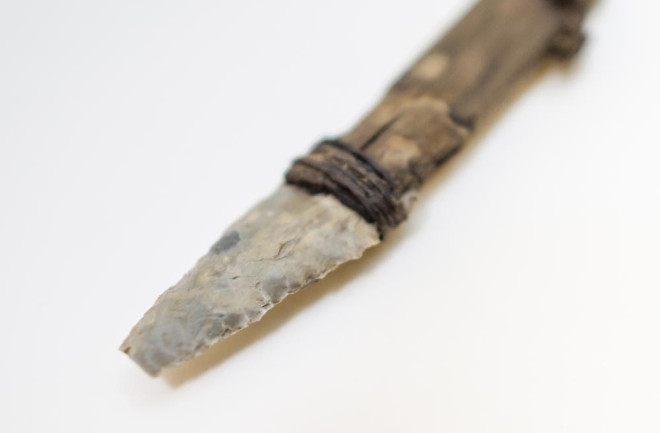 Daggers like Ötzi’s may have had symbolic significance during the Copper Age. (Credit: South Tyrol Museum of Archaeology) Though he died 5300 years ago in the Alps near the Austrian-Italian border, the prehistoric man known as Ötzi the Iceman has had a remarkable afterlife in the sciences. His mummified body chiseled out of ice in 1991 has undergone extensive examination, revealing details about his life and times. The work has offered a glimpse into the everyday life of Alpine inhabitants in the late 4th millennium BC. A paper published Wednesday in PLOS One reveals the extent to which the Iceman maintained his tools and arrows, and adds to the research on the trade networks of the time.

Ötzi’s tools were stored in his belt pouch. Several of them were designed to cut plants and soft wood and had been re-sharpened multiple times, the paper says. Others were proto tools, the blades still being formed and sharpened by the Iceman. The scientists give Ötzi a “6 or 7 out of 10” for his tool work. The rating “signifies a level of skill that is just effective enough to achieve correct results in retouching and re-sharpening,” writes the team, led by Ursula Wierer, a scientist at the Superintendence for Archaeological Heritage of Tuscany in Italy. Researchers also examined a 5-inch dagger found near the Iceman’s body. They contend it was made not by him but a craftsman “of medium to good skill in pressure flaking.” To keep the dagger sharp and ready, Ötzi used a pencil-shaped tool, made from a deer antler and wood.

Examination of Ötzi’s tools reveals they were mainly used to cut plants and soft wood. (Credit: South Tyrol Museum of Archaeology) The tool, which scientists call a retoucher, apparently served Ötzi well for a long time. “The wooden handle is intensely worn with several rounded and damaged parts,” the researchers say. “The apex of the antler tip bears small incisions caused by use.” Surprisingly, the dagger was not used to cut plants or wood, the analysis shows. Based on their placement in burials and depictions in art during the Copper Age, when Ötzi lived, daggers probably held symbolic significance. “The items could have represented a distinctive sign for the social identity of its owner,” the authors write. People who met Ötzi likely noticed the dagger. “Keeping it in a dedicated scabbard equipped with a leather eyelet,” they write, “Ötzi could indeed have carried it in view, fixed on an outer belt.”

Previous scholarship has shown that the alpine settlements of the Copper Age were part of a vast trade network. It’s been revealed, for example, that the copper from Ötzi’s axe came from Central Italy, hundreds of miles south. The team’s work builds on this research. Most of the tools and arrows the researchers examined were made of chert, a sedimentary rock. Chert was mined in three different areas in the Southern Alps, suggesting an extensive trade network, the paper says. The style of the tools indicates contact with cultures across the region. Ötzi’s life ended when he was about 45 years old. He was killed by a Southern Alps archer who might have tracked him into the mountains. The Iceman’s body was quickly covered by snow and ice, his final resting place a two-day walk from his valley home.