Ötzi the Iceman Stars in a New Feature Film 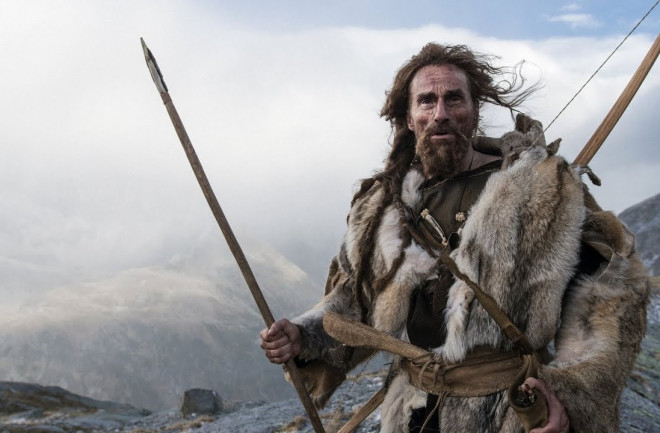 Jürgen Vogel is Ötzi the Iceman. (Credit: Port au Prince 24/Bilder) From a block of ice to the silver screen; Ötzi the Iceman, an archaeological star, is getting his own feature film. From German director Felix Randau, the movie is a fictionalized account of Ötzi's life and eventual death at the hands of an unknown archer in the Alps. Though the story is mostly fictional, the clothing, props and setting were all recreated with the help of researchers from the South Tyrol Museum of Archaeology, with the goal of creating a story that could have potentially played out 5,300 years ago. It's called "Der Mann Aus Dem Eis," or the much-more-concisely-translated "Iceman."

If you didn't know already, Ötzi dies at the end—this is a spoiler akin to revealing the end of Titanic. That fact we know for certain, given that he was found in 1991 near the Austria-Italy border frozen into a block of ice. The ancient hunter, played by German actor Jürgen Vogel, was likely killed by an arrow to his left shoulder and a nasty knock to the head that left him bleeding out in the snow. Luckily for us, he was covered by snow and ice soon after his demise, leaving him astonishingly well-preserved. Scientists have been able to study the contents of his stomach, his more than 60 tattoos, his voice, his clothing, his DNA and much more. https://www.youtube.com/watch?v=y6VbFJToFWo The story is probably the most fantastical part of the movie, though Randau maintains that it's within the boundaries of what could have actually happened. When a rival tribe attacks and kills his family, making off with a ritual mirror in the process, Ötzi, called Kelab in the movie, sets out through the wintry Alps to exact revenge. From the trailer, the movie doesn't skimp on action sequences as the 40-something Ötzi — an old man for the time — taps into his Neolithic Liam Neeson. We know it doesn't end well for him, though there's hopefully some measure of redemption along the way.

The rest of the film strives to be as accurate as possible, though. The vast body of research into Ötzi's remains, along with guidance from researchers who have worked with him, helped Randau craft a story that will hopefully offer a true-to-life glimpse at life in the Neolithic. In the movie Ötzi wears goat-leather leggings and a bear-fur hat similar to those the Iceman was found wearing when he died, and carries the same tools — a copper axe, bow and arrows and a rabbit net. Ötzi's tattoos were recreated for the movie as well, and it was shot in the South Tyrolean Alps near where the Iceman was discovered. The huts are based on dwellings found in the region from the same time period. As you can see from the opening of the trailer, they mirrored Ötzi's final resting position. Even the dialogue hews close to what Ötzi may have heard during his life. The lines in the movie were all written in a made-up tongue based on Raethic, a language spoken in the region during Roman and pre-Roman times. There are no subtitles, so audiences will have to work out for themselves what's being said. The representations of family life and inter-tribe dynamics are harder to get right, due to a lack of data in those areas, as well as the ritual practices of Neolithic tribes. We have some idea of their beliefs from studies of burial practices, but Ötzi died alone as far as we can tell, with no one to tend to his remains. Regardless, the actual story of his life would surely made for a thrilling movie. "Iceman" has a 6.5/10 rating on IMBD right now.