Ötzi the Iceman Spills His Guts 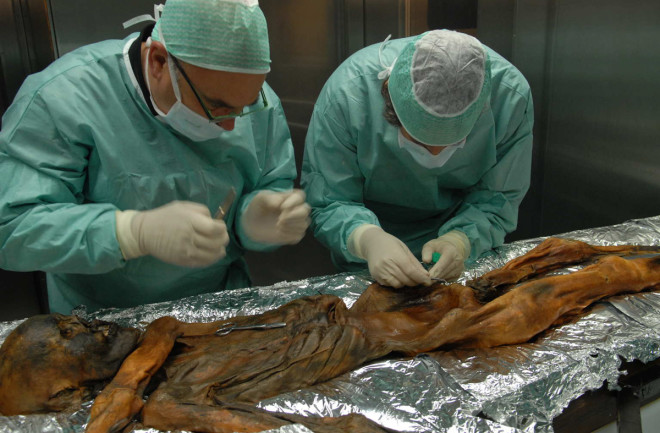 Eduard Egarter-Vigl (left) and Albert Zink (right) take a sample from the Iceman in November 2010. (Credit: © EURAC/Marion Lafogler) Gut microbes found in a 5,300-year-old mummy may revise the story of human migration into Europe. A team of researchers recently found the remains of H. pylori in the digestive tract of a Copper Age mummy known as Ötzi the Iceman. He died 5,300 years ago, near the present-day border between Italy and Austria, and his remains were frozen in a glacier for thousands of years until hikers stumbled across the body in 1991. He’s been well-studied in the decades since, but his stomach had been overlooked until 2010, when a group of radiologists happened to take a second look at an earlier CT scan and noticed that Ötzi’s stomach was actually well-preserved. Its contents could help re-write human prehistory, and revealed new insights about his health at the time of his murder.Ancient Migrations The bacterium Heliobacter pylori has been with us for at least 100,000 years, long before the first Homo sapiens started migrating out of Africa. Today, about 50 percent of people carry H. pylori in their stomachs. Because it has migrated along with humans for so long, H. pylori’s evolutionary history mirrors the pattern of major human demographic shifts. And because bacteria DNA mutates faster than human DNA, studying H. pylori as a marker can give researchers a higher-resolution look at how human populations have moved and mingled over millennia. The strain of H. pylori in the Iceman’s stomach is an ancient relative of a strain that’s now found only in people from India and southern Asia. The strain, called hpAsia2, was much more widespread during prehistoric times; it once infected human populations stretching from Central Asia to Western Europe.

A reconstruction of the Iceman (Credit: Adrie and Alfons Kennis/ South Tyrol Museum of Archaeology, Foto Ochsenreiter) Modern Europeans carry a different strain of H. pylori. It’s a hybrid of the ancestral Asian strain and another ancestral strain that probably originated in northeast Africa. At some point in European prehistory, that northeast African strain made its way into Europe, probably traveling along with Neolithic populations as they migrated from Africa to the Middle East and then, eventually, to Europe. There, the ancestral H. pylori strain from northeast Africa mixed with the central Asian strain that was already living in the stomachs of ancient Europeans. For years, researchers have debated when and how that migration and mixing took place. Some thought that the two ancestral strains met and combined in the Middle East or Western Asia as early as 52,000 to 10,000 years ago, and then migrating humans carried the new strain into Europe after the ice sheets of the Last Glacial Maximum began to recede. Others thought the ancestral African strain arrived in Europe more recently, starting in the Neolithic Period around 6,000 years ago. Migration Mystery Solved The Iceman lived his entire life in the eastern Italian Alps, and his DNA shows that he’s closely related to early European farmers. Therefore, if he carried a pure central Asian strain of H. pylori 5,300 years ago, then that’s probably the strain most Europeans carried at the time. The mixing that created modern European H. pylori couldn’t have happened until sometime after his death. The Iceman’s H. pylori did carry a tiny amount of northeast African DNA: about 6.5 percent. That’s about the same amount that shows up in modern hpAsia2 strains. Researchers say this serves as evidence that the ancestral African strain of H. pylori was present in Europe during the Copper Age, but only at a very low level. The new strain didn’t begin to arrive in earnest until sometime after 5,000 years ago, much later than earlier theories had predicted. “This one genome has put things into wonderful perspective for us and answered this question that we've been trying to answer for years,” says study coauthor Yoshan Moodley of the University of Venda in South Africa during a press conference Wednesday. “We can say now that the waves of migration that brought these African Heliobacter pylori had not occurred, or at least not occurred in earnest, by the time the Iceman was around.” The researchers published their results Thursday in the journal Science.

The Iceman. (Credit: © EURAC/Marion Lafogler)A Hard Life Researchers say the Iceman’s strain of H. pylori is similar to strains that cause ulcers, and occasionally even stomach cancer, in some modern people. His immune system had clearly reacted to the bacteria; the researchers found traces of marker proteins that usually represent an inflammatory response to infection. “We can't be 100 percent sure that he really suffered from gastric disease. It's very probable, because we have the evidence that there was this immune reaction, so he probably had some stomach issues, but we cannot really tell to what extent,” says coauthor Albert Zink of the Institude for Mummies and the Iceman at the European Academy of Bozen. With or without ulcers, Ötzi’s life was far from comfortable. Earlier studies found evidence of past illness and healed fractures, along with degenerative joint disease in his back, knees, and feet – the product of a lifetime spent walking in the mountains. He also carried intestinal parasites that may have had Lyme disease. But all of those woes were likely common in Ötzi’s day, and he lived to a respectable age for his time period; scientists say he was about 45 years old when he died, and based on his condition, he could have lived for another ten to twenty years if someone hadn’t shot him with an arrow. “In the end it was, for sure, a tough life in this time period, but with regard to his life circumstances I think he was still in a quite good shape,” Zink says. Future Studies “I have to say that this study was really challenging, and initially we were really not sure if you could succeed also in the reconstruction of such an old, ancient pathogen genome,” says lead author Frank Maixner, also of the Institute for Mummies and the Iceman. Now that his team has proven it’s possible to find and sequence the genome of ancient bacteria, however, they hope to study H. pylori from the guts of other mummies around the world. That could give researchers more insight into ancient human migration patterns, and it could open an entirely new field of study. “This is one of the first initial cases for what modern DNA sequencing technology in combination with powerful computational methods can achieve,” says coauthor Thomas Rattei of the University of Vienna. “I would see, actually, a totally new research area, which I would call paleomicrobiology, that studies particularly ancient microbes.”