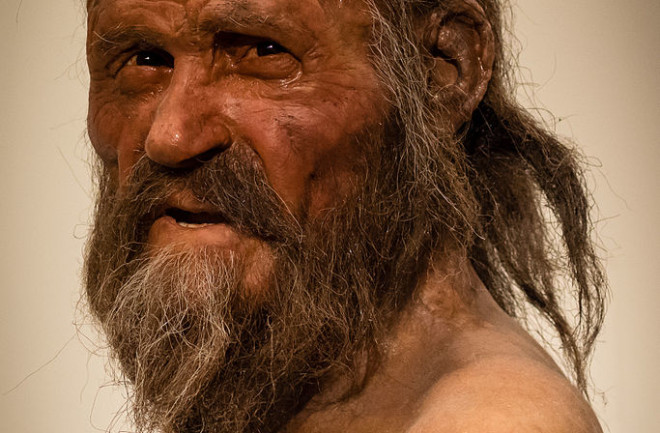 A reconstruction of what Otzi may have looked like. (Credit: Thilo Parg/Wikimedia Commons) Ötzi the Iceman is speaking from beyond the grave. It's not a seance that brought his voice — or a rough approximation of it — to life though, but instead a careful reconstruction of his vocal cords. A team of researchers led by members of the Ear, Nose and Throat Department at Bolzano General Hospital conducted a series of CT scans of the 5,300 year old mummy's vocal cords and vocal tract and attempted to digitally reconstruct his speech organs, according toSeeker. They reported their results Wednesday at the 3rd Bolzano Mummy Congress in Italy, celebrating the 25th anniversary of Otzi's discovery.

Researchers were working with incomplete information (it is a 5,300 year-old mummy, after all), so, as you will hear, it's a very rough, very preliminary model. Still, they say that their work is a step toward recreating the voice of a man who died 5,000 years ago. Their reconstruction is based on the length of Ötzi's vocal cords and tract, both of which play an important role in modulating the sounds that emerge from our mouths. Still missing from their analysis is the tension and density of his vocal cords, as well as the structure of the soft tissues surrounding his mouth and throat. Based on their work, they say that his voice likely had a fundamental frequency somewhere around 100 to 150 Hertz, which is about the norm for males today. Their first attempt at reawakening Ötzi's vocal cords yielded a gravely series of Italian vowels — though it isn't clear what language he actually spoke. [embed]https://www.youtube.com/watch?v=_FUH4xpYUMs[/embed]

Ötzi was discovered in the Ötz Valley high in the Italian Alps in 1991 by a pair of hikers. Since then, he has been poked and prodded and has starred in myriad research papers. He currently is on display at Bolzano’s South Tyrol Museum of Archaeology. Today, we know that he died from an arrow wound to the shoulder, and that he suffered from a few health complications, including broken ribs, whipworm and arterial disease. The researchers had to overcome a few problematic conditions to create their vocal model, par for the course when working with someone who's been frozen for more than 50 centuries. Ötzi died with his arm draped across his throat — the exact area the researchers needed to study. In addition, his hyoid bone, which forms the base of the tongue, was dislocated and partially degraded. MRI scans, which would have helped provide additional information, risked causing damage to his fragile body, so the researchers were forced to rely on X-rays. Using data from the scans and computer algorithms that model the movements of the vocal cords, the researchers could digitally manipulate his body, moving the offending limb and putting his tongue back into place. This latest perspective on who Ötzi was and how he lived is just another effort in what is becoming a comprehensive examination of the Iceman. Since his discovery, Ötzi has had his genome sequenced, his stomach contents examined, his tattoos mapped, his clothes reconstructed, his blood cells analyzed and his relatives located. This scientific scrutiny is well-founded — Ötzi is one of the oldest and best preserved bodies ever found, and the details of his life flesh out a prehistoric society for us like no bones or artifacts can. The addition of his voice to the list of scientific inquests into his life helps to bring him to life, but it could also be potentially used for other mummies around the world as well. Perhaps someday these ancient bodies could tell tales in their own voices.