Ötzi the Iceman and the Sardinians 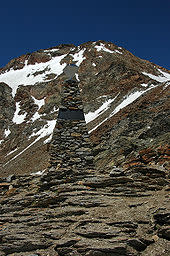 Well, the paper is finally out, New insights into the Tyrolean Iceman’s origin and phenotype as inferred by whole-genome sequencing. In case you don't know, Ötzi the Iceman died 5,300 years ago in the alpine region bordering Austria and Italy. His seems to have been killed. And due to various coincidences his body was also very well preserved. This means that enough tissue remained that researchers have been able to amplify his DNA. And now they've sequenced it enough to the point where they can make some inferences about his phenotypic characteristics, and, his phylogenetic relationships to modern populations. The guts of this paper will not be particularly surprising to close readers of this weblog. The guesses of some readers based on what the researchers hinted were correct: Ötzi seems to resemble mostly closely the people of Sardinia. This is rather interesting. One reason is prosaic. The HGDP sample used in the paper has many Northern Italians (from Bergamo). Why is it that Ötzi does not resemble the people from the region that he was indigenous to? (we know that he was indigenous because of the ratio of isotopes in his body) A more abstruse issue is that it is interesting that Sardinians have remained moored to their genetic past, enough so that a 5,300 year old individual clearly can exhibit affinities with them. The distinctiveness of Sardinians jumps out at you when you analyze genetic data sets. They were clearly set apart in L. L. Cavalli-Sforza's The History and Geography of Human Genes, 20 years ago. One reason that Sardinians may be distinctive is that Sardinia is an isolated island. Islands experience reduced gene flow because they're surrounded by water. And sure enough, Sardinians are especially similar to each other in relation to other European populations. 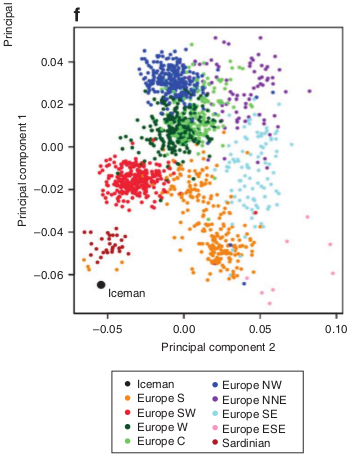 But Ötzi's affinities reduce the strength of this particular dynamic as an explanation for Sardinian distinctiveness. The plot to the left is a PCA. It takes the genetic variation in the data set, and extracts out the largest independent components. PC 1 is the largest component, and PC 2 the second largest. The primary cline of genetic variation in Europe is North-South, with a secondary one going from West-East. This is evident in the plot, with PC 1 being North-South, and PC 2 being West-East. The "Europe S" cluster includes northern, southern, and Sicilian Italians. Now notice the position of Ötzi: he is closest to a large cluster of Sardinians. Interestingly there are also a few others. Who are they? I do not know because I do not have access to the supplements right now. The fact that the Sardinians are shifted closer to the continental populations than Ötzi is also striking. But totally intelligible: Sardinia has had some gene flow with other Mediterranean populations. This obviously post-dates Ötzi; Roman adventurers and Genoaese magnates could not be in his genealogy because Rome and Genoa did not exist 5,300 years ago. These data strongly point to the possibility of rather major genetic changes in continental Europe, and in particular Italy, since the Copper Age. Juvenal complained that the "River Orantes has long flowed into the Tiber," a reference to the prominence of easterners, Greek and non-Greek, in the city of Rome. The impact of this is not to be dismissed, but I do not think that it gets to the heart of this matter. 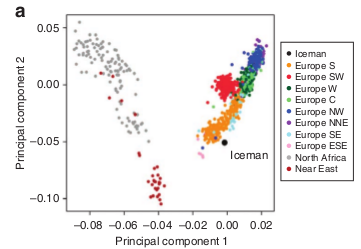 The second panel makes clear what I'm hinting at: Ötzi is actually closer to the "Middle Eastern" cluster than many Italians! In fact, more than most. Why? I suspect that rather than the Orantes, the Rhine and the Elbe have had more of an impact on the genetic character of Italians over the past ~5,000 years. Before Lombardy was Lombardy, named for a German tribe, it was Cisapline Gaul, after the Celts who had settled it. And before that? For that you have to ask where Indo-Europeans came from. I suspect the answer is that they came from the north, and therefore brought northern genes.

And what of the Sardinians? I believe that the "islanders" of the Mediterranean are a relatively "pristine" snapshot of a particular moment in the history of the region. This is evident in Dienekes' Dodecad Ancestry Project

. Unlike their mainland cousins both the Sardinians and Cypriots tend to lack a "Northern European" component. Are the islanders in part descendants of the Paleolithic populations? In part. Sardinians carry a relatively high fraction of the U5 haplogroup

, which has been associated with ancient hunter-gatherer remains. But it is also possible that the preponderant aspect of Sardinian ancestry derives from the first farmers to settle the Western Mediterranean. I say this because the Iceman carried the G2a Y haplogroup, which has of late been strongly associated with very early Neolithic populations in Western Europe

. And interestingly some scholars have discerned a pre-Indo-European substrate in Sardinian

which suggests a connection to the Basque. I wouldn't read too much into that, but these questions need to be explored, as Ötzi's genetic nature makes Sardiniaology more critical to understanding the European past.