Organic Produce Has Pesticide Residues, Too---and a Little Pesticide May Not Be So Bad 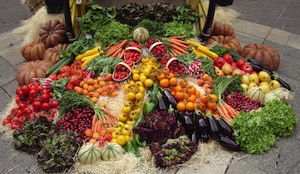 Unlike pesticide-laden conventional food, organic produce is more natural, healthier, and better for you...right? Organic food does contain less synthetic pesticides. But the natural pesticides that replace them can also have harmful effects. For example, the organic pesticide copper sulfate is more toxic than some synthetic pesticides, and it can cause

genetic mutations, cancer, liver disease, and anemia. No matter what you choose to eat, both conventional and organic produce can expose you to low levels of pesticides. Before you forswear all greens, however, bear in mind that low pesticide levels aren't the worst thing in the world. At her Science Sushi blog on Scientific American's network, Christie Wilcox explains

that a little bit of pesticide exposure can actually be good for you.

While it might seem that decreasing exposure to pesticides in any way could only be good for you, toxicologists would differ. Contrary to what you might think, lower exposure isn’t necessarily better. It’s what’s known as hormesis, or a hormetic dose response curve. There is evidence that exposure to most chemicals at doses significantly below danger thresholds, even pesticides, is beneficial when compared to no exposure at all. Why? Perhaps because it kick starts our immune system. Or, perhaps, because pesticides activate beneficial biological pathways. For most chemicals, we simply don’t know. What we do know is that data collected from 5000 dose response measurements [pdf] (abstracted from over 20,000 studies) found that low doses of many supposedly toxic chemicals, metals, pesticides and fungicides either reduced cancer rates below controls or increased longevity or growth in a variety of animals. So while high acute and chronic exposures are bad, the levels we see in food that are well below danger thresholds may even be good for us. This isn’t as surprising as you might think—just look at most pharmaceuticals. People take low doses of aspirin daily to improve their heart health, but at high chronic doses, it can cause anything from vomiting to seizures and even death. Similarly, a glass of red wine every day might be good for you. But ten glasses a day? Definitely not.

Wilcox suggests that the difference between conventional and organic foods may not really be that great. In fact, there is a great deal of variation within the organic system: two random organic farms may use completely different standards. At the end of the day, the pesticides you ingest with your fruit and veggies do less harm to your health than avoiding greens altogether. For more on organic versus non-organic pesticides and practices, check out the full post