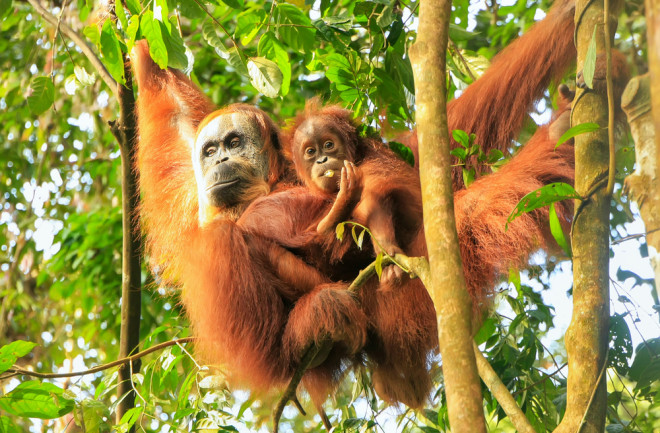 It’s easy enough to spot similarities between orangutans and humans — the “man of the forest” can certainly act human, and they share our big brains, social structures and even opposable thumbs. It shouldn’t be too surprising, since we also share about 97 percent of our DNA with the great apes.

But a new finding, published today in Science Advances, suggests we may have even more in common than that, as orangutans showed the capacity for a form of abstract communication we’d never seen before. It’s a finding that reflects not just the apes’ abilities, but may also shed light on how language evolved in the first place.

While many animals can communicate with each other, only humans seem to have actual languages, a hallmark of which is the ability to talk about things that aren’t there. The linguist Charles Hockett called this phenomenon “displaced reference,” since whatever the speaker referred to was displaced in space or time. Besides humans, only honeybees had been observed to engage in this behavior, communicating the location of food via dance — and it’s not really a function of cognitive abilities, either. Great apes, such as orangutans, have displayed the capacity for displaced reference, albeit only in captivity.

But previous studies had shown that it might be possible to observe the ability in the wild, via alarm calls that primates made in the presence of predators. Most species would call out in warning immediately, but orangutans would actually wait until the threat was out of sight, then make noise. Could they be waiting until safety was more likely, then communicating to others the danger that may still be nearby — a danger not physically there anymore?

The study’s two authors show that, yes, that’s probably exactly the case. They made seven orangutan mothers think a predator was nearby for two minutes, and studied exactly how they reacted. (The predators were actually experimenters wearing sheets covered in different patterns: tiger stripes, a color pattern, white with spots and plain white.) Of the 24 exposures, 12 resulted in no shouting at all, but the other 12 called out in alarm to their babies only after waiting an average of 7 minutes. One orangutan waited over 19 minutes before shouting, a pretty big time displacement.

The authors found that the closer the predator, the less likely the orangutan would be to make any noise, and if she did the delay would be longer. But at the same time, the younger her baby, the more likely she’d be to call out, after a shorter delay. (The mom’s own age had no affect one way or another.) The researchers explain pretty convincingly why all this means the delays are likely not the result of a “petrification” response, where the ape is simply frozen in fear temporarily, but rather the result of cognitive processes involving memory of the predator.

“Notably, the significant effect of infant age on vocal alarm probability by the mother,” they write, “indicates that the decision to call or not to call — even after the cause was long gone — derived, in part, as a measure of perceived danger for others. Because vocal alarms inherently reveal a subject’s presence and position, females appear to delay their response to minimize the perceived possibility of a predator attempting a direct assault, particularly in the presence of an unweaned infant.”

While the authors acknowledge there may be other explanations, and it’d take more research to know for sure, the findings are evocative. If these smart great apes naturally have the capacity for displaced reference, it suggests greater language abilities may arise along with greater cognitive abilities. And even if that interpretation is off base, just having another example of advanced communication in nature provides researchers another opportunity to study the phenomenon.