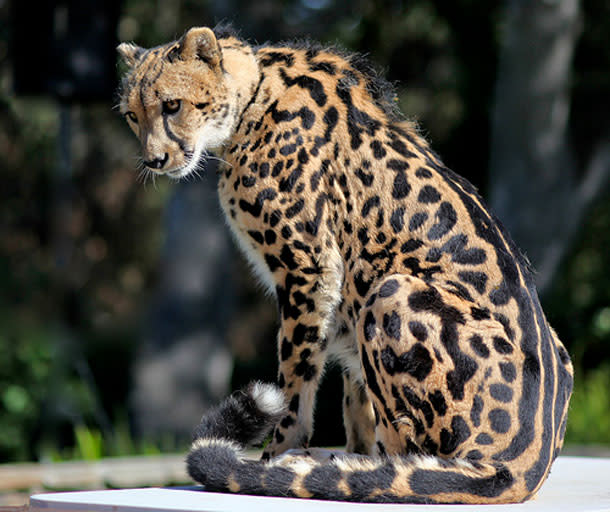 The cheetah’s spots look like the work of a skilled artist, who has delicately dabbed dots of ink upon the animal’s coat. By contrast, the king cheetah – a rare breed from southern Africa – looks like the same artist had a bad day and knocked the whole ink pot over. With thick stripes running down its back, and disorderly blotches over the rest of its body, the king cheetah looks so unusual that it was originally considered a separate species. Its true nature as a mutant breed was finally confirmed in 1981 when two captive spotted females each gave birth to a king. Two teams of scientists, led by Greg Barsh from the HudsonAlpha Institute for Biotechnology and Stanford University, and Stephen O’Brien from the Frederick National Laboratory for Cancer Research have discovered the gene behind the king cheetah’s ink-stains. And it’s the same gene that turns a mackerel-striped tabby cat into a blotched “classic” one. Back in 2010, Eduardo Eizirik, one of O’Brien’s team, found a small region of DNA that seemed to control the different markings in mackerel and blotched tabbies. But, we only have a rough draft of the cat genome, they couldn’t identify any specific genes within the area. The study caught the attention of Barsh, who had long been interested in understanding how cats get their patterns, from tiger stripes to leopard rosettes. The two teams started working together. Christopher Kaelin and Xing Xu focused on the region that Eizirik had identified, using DNA samples taken from Californian feral cats that had been captured for sterilisation. By comparing mackerel and blotched individuals, the team found one gene that was responsible for the different markings. They dubbed it Taqpep. All blotched tabbies have one of two critical mutations in both their copies of Taqpep, while all mackerel cats have one or two unblemished versions. 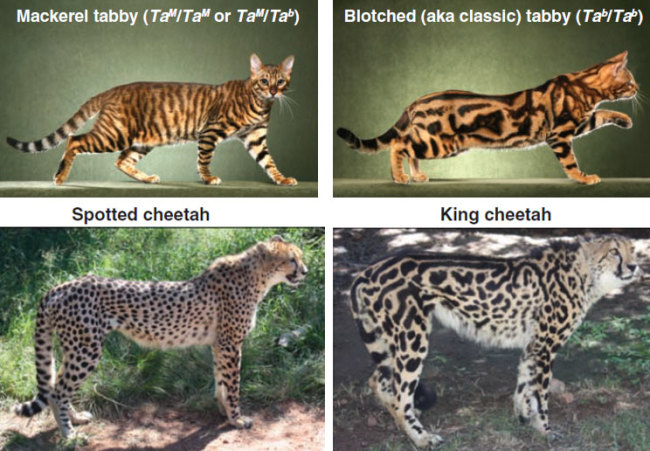 Taqpep is also responsible for the king cheetah’s unmistakeable coat. Kaelin and Xu sequenced the gene in Kgosi, a captive king cheetah, and found another mutation in Taqpep, one that greatly enlarges the protein encoded by the gene. Kaelin got in touch with Ann van Dyk, the woman who first identified that king cheetahs were a mutant version of the regular ones. She runs a cheetah conservation centre in South Africa that’s Kgosi, and all other captive kings, came from. By analysing all of her cheetahs, van Dyk confirmed that Kgosi’s Taqpep mutation is found in all the kings, and none of the 217 wild spotted cheetahs do. Taqpep is activated in cat skin, and not in other organs. But in both cheetahs and domestic tabbies, it’s active at low levels in both dark and light patches. So what is Taqpep actually doing, and if it isn’t directly changing the colour of the felines’ fur, then what is? Another member of the team, Kelly McGowan, found an important clue. A tabby’s markings start appearing when the foetus is seven weeks old. At that point, the cradle-shaped organs known as follicles are fully developed, and they start to produce hairs. If a follicle produces lots of melanin – a dark pigment – it grows a dark hair. So why do some follicles churn out melanin, while others exercise more restraint? To find out, Lewis Hong looked for genes whose activity varied between the yellow and black zones of a cheetah’s skin. His search yielded 60 genes that were more active in the black spots, and one of them stood out – Edn3. Edn3 produces a hormone that fuels the growth and division of melanocytes – the cells that make melanin. It’s active in the follicles, and more so in black regions than yellow ones – something that Hong confirmed in cheetahs, tabbies, and even one leopard. When he artificially increased the activity of Edn3 in the skins of laboratory mice, their coats blackened. Let’s put this all together. The team thinks that Taqpep somehow creates periodic zones in the skins of foetal cats. These zones determine how active Edn3 will later be, which in turn dictates the number of melanocytes in the follicles. More melanocytes means more melanin, which means dark hair. Note that the “zones” that Taqpep sets up are invisible. They only become apparent through their subsequent influence on Edn3. If Taqpep is disrupted by certain mutations, as in blotched tabbies and king cheetahs, it sets up wider and more erratic zones, leading to chaotic stains rather than even spots. How can Taqpep create these zones if it’s evenly active throughout a cat’s skin? There are a few possibilities, but here’s the most intriguing one: Taqpep creates a protein called Tabulin that usually sits in the membranes of skin cells, but can detach and drift between them. So Taqpep might be active everywhere, but Tabulin can diffuse through the skin and become concentrated in certain areas. This is really exciting, because diffusing molecules are central to a longstanding explanation for animal patterns. Back in 1952, Alan Turing, the legendary computer scientist and code-breaker, suggested that animal skins could produce beautiful complex patterns through a lively tango between two molecules – an activator and an inhibitor. Both diffuse throughout the skin, and react with each other. Over short distances, the activator reinforces itself, but over longer distances, the inhibitor blocks it. Depending on how quickly they spread and how strongly they interact, they can produce everything from spots to blotches (play around with this Java applet to see what I mean.) Scientists have tested Turing’s “reaction-diffusion” ideas in many different animals, but it has been next to impossible to find the actual activators or inhibitors. Barsh thinks that Taqpep (or rather, Tabulin) may be one of them, and the team is now looking into it further. Hopi Hoekstra, who studies the genetics of animal colour at Harvard University, is very impressed with the study. “It’s a tour de force,” she says. “We previously knew very little of about how patterns are formed and maintained in mammals. This is largely because the workhorse of pigment genetics—the laboratory mouse—doesn't display stripes or spots.” Kaelin’s team got around that problem by studying the diversity of wild and domestic cats. Thanks to their work, we’re getting closer to the real story about how the leopard (or cheetah) got its spots, or the tiger its stripes. Turing drafted the outline, and Barsh and O’Brien and filling in the details. Reference: Kaelin, Xu, Hong, David, McGowan, Schmidt-Kuntzel, Roelke, Pino, Pontius, Cooper, Manuel, Swnson, Marker, Harper, van Dyk, Yue, Mullikin, Warren, Eizirik, Kos, O’Brien, Barsh & Menotti-Raymonds. 2012. Specifying and Sustaining Pigmentation Patterns in Domestic and Wild Cats. Science http://dx.doi.org/10.1126/science.1220893Image by Jurvetson

These 5 Science Projects are Perfect for Thanksgiving

The SciencesWhat's the Difference Between Baking Soda and Baking Powder?
Recommendations From Our Store