Nyiragongo, a massive shield volcano near a city of 2 million people, erupted over the weekend with lava flows that snaked through city streets. 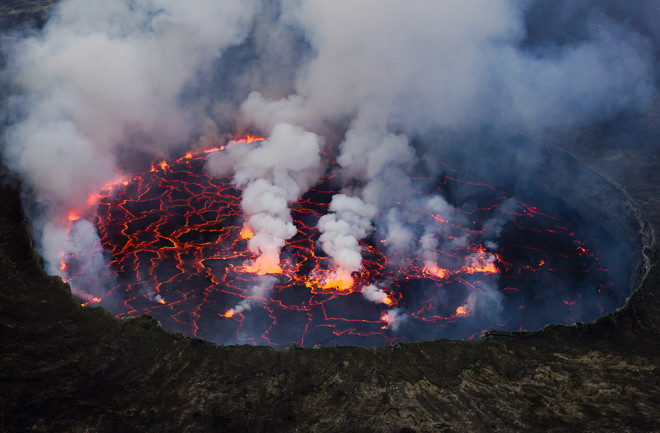 Sitting a mere 9 miles (15 kilometers) from Goma, a city of over 2 million people, is Nyiragongo. It is a massive volcano that is part of the East African Rift. The volcano is one of the few in the world with a persistent lava lake ... and it is one of the few where lava flows from the volcano have been fatal. Twice over the past 50 years, Nyiragongo's lava flows have destroyed parts of Goma, killing people along the way.

It is no wonder that the eruption of Nyiragongo over the weekend caused such panic in the Democratic Republic of the Congo and nearby Rwanda. Lava flows overtopped the summit crater rim and flowed all the way down into some of the towns near Goma. Fifteen have been confirmed killed in the eruption. The flows themselves have not crossed into the city officially, but have heavily damaged some lava flows along the way. There is some stunning footage of lava working its way between buildings in the outskirts of the city as well.

People walking over a lava from from the May 2021 eruption of Nyiragongo. Credit: Charles Balagizi, GVO.

These lava flows have already destroyed a swath of homes and businesses. A helicopter flight over the region shows the dark lava paving parts of the towns while drone footage shows the steaming lava and smoldering remains of buildings. The flows themselves are in the northern part of the city, moving towards the city's airport. Thousands of people have fled the eruption into neighboring Rwanda, although some have returned, trekking across still-hot lava (see above).

I took some Suomi NPP images and thermal data from the Terra, Aqua and Suomi satellites that show how the lava flows moved down towards Goma. On May 17, the thermal anomalies were focussed at the summit lava lake, but over the next few days, those anomalies moved towards Goma as the lava flows trekked southward. The eruption is also producing significant sulfur dioxide emissions as well.

The eruptions at Nyiragongo in 1977 and 2002 both lead to fatalities from the lava flows. Most of the time, lava flows are not particularly hazardous to people because they move at a slow enough pace that people can get out of the way. However, the lava at Nyiragongo is especially low viscosity -- it is runnier than most lava -- thanks to a compositional difference (it is richer in elements like sodium and potassium) and its high temperature. When the lava lake is breached, that hot, alkali-rich lava can flow much faster, up to 60 miles per hour.

Although the eruption has waned, Nyiragongo will need to be watched closely. The potential devastation that these lava flows can have on Goma are not to be taken lightly. Although people will likely be able to get out of the paths of the lava, homes and businesses will be destroyed.