The bewitching birds nest only here, in one of the most inaccessible places on the planet. 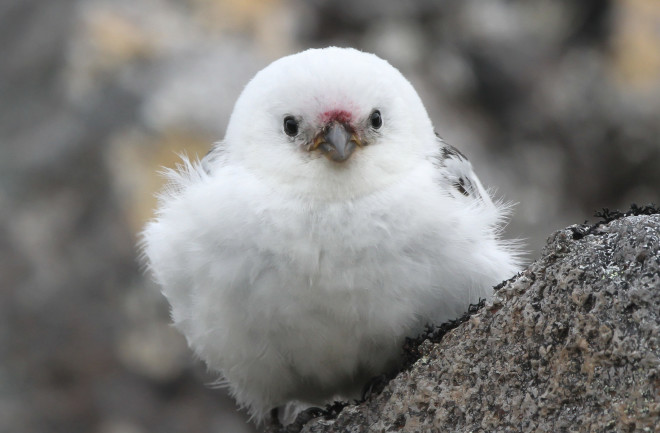 A female McKay’s bunting with berry-stained feathers poses post-meal. She lives on the secluded island of St. Matthew with all the members of her species. (Credit: Rachel Richardson)

This article appeared in the March/April 2021 issue of Discover as "The Land of Living Snowflakes." Support our science journalism by becoming a subscriber.

St. Matthew Island sits alone in the frigid emptiness of the Bering Sea, like a great, gnarled stone thrown far from Alaska’s western coast. On these shores, the rhythmic lapping of brisk waves and a medley of tinny, chime-like songs are the only sounds rising above the island’s foggy, treeless crown.

The songs come from male McKay’s buntings — brilliantly white birds that drift to the earth in graceful, sweeping arcs. The birds’ bewitching mating ritual and nesting occurs only here, in one of the most inaccessible places on the planet. Precious little is known about their world. Researchers are aiming to change that.

The bewitching birds nest only here in the secluded island of St. Matthew, one of the most inaccessible places on the planet. (Credit: Rachel Richardson)

The ornithological community’s knowledge of McKay’s buntings — the only bird with a range completely contained within Alaska’s borders — dates back to the birds’ discovery in 1879. Naturalist and author John Burroughs, while on an 1899 expedition to Alaska, was smitten with the male buntings’ displays over the tundra of Hall Island, a small satellite off St. Matthew’s Glory of Russia Cape.

“Drifting over this marvelous carpet,” he wrote in 1901, “or dropping down upon it from the air above was the hyperborean snowbird, white as a snowflake and with a song of great sweetness and power.”

Named after naturalist Charles McKay, who first collected specimens of the bird, these buntings are so evocative of winter flurries that, for years, they were known as “McKay’s snowflakes.”

“I actually like the original name better,” says Steven Matsuoka, a wildlife biologist with the U.S. Geological Survey’s Alaska Science Center, who studies the birds today.

Since their formal description in the 1880s, these rarely seen birds have eluded in-depth study. At 32 miles long, St. Matthew Island is uninhabited, its undulating sea of cold-stunted grass and moss only broken by the ghostly tines of reindeer antlers affixed to bleached skulls. The introduced reindeer briefly crowded the island decades ago but have since died out, leaving ceaseless wind as the most frequent guest on the island.

“Alaska’s noted for being a remote wilderness area, and even among Alaskans, St. Matthew is held in regard because it’s the hardest place to get to,” says Matsuoka. “There’s no regular air service; it’s 250 kilometers [over 150 miles] from any settlements."

The island wilderness is so isolated that two decades passed between expeditions to the McKay’s buntings’ breeding grounds. In the early 1980s, researchers visited St. Matthew to learn about the birds’ nesting habits. Then, in 2003, another group of scientists returned to estimate the birds’ numbers. Results from these surveys suggested that there may be more than 30,000 McKay’s buntings — 10 times more than previously estimated, according to Matsuoka. Despite this, McKay’s buntings could be the rarest bird in North America, says Rachel Richardson, another wildlife biologist with the Alaska Science Center.

The birds are potentially vulnerable, too, given that they depend on such a small island area for breeding. Evaluating possible threats — like invasive species and climate change — on this island is paramount for safeguarding these living snowflakes.

In the summer of 2018, another team of researchers — Richardson among them — returned to the breeding grounds, spending five weeks on St. Matthew studying the birds’ nesting habits and potential conservation threats.

“Getting out to the islands is really no small feat,” says Richardson.

The team had to access the buntings’ haven from an already far-flung locale: St. Paul, part of the desolate, volcanic Pribilof Islands, which are a three- to four-hour plane ride from Anchorage. From there, Richardson and her colleagues boarded the R/V Tiĝlax (pronounced TEKH-la), a U.S. Fish and Wildlife Service research vessel. After 28 hours of non-stop voyaging over whipping, 12-foot seas, the wind-carved undulations of St. Matthew and Hall Islands came into view.

On St. Matthew, an uninhabited wildlife refuge, no structures break the rolling expanse of low grasses and sedges. The team made camp with a series of weather-resistant tents, outfitted with kerosene heaters for warmth and propane stoves for cooking. They sheltered on the sub-Arctic tundra, enduring rain, thick fog and wind.

Even in summer, the Bering Sea (above right) can bring cold wind and rain, so shelter is essential. (Credit: Rachel Richardson)

What seemed harsh and empty for the researchers turned out to be lavish for Bering Sea wildlife. They found spotted seals sprawled out in the shadow of towering sea cliffs, cacophonous seabird colonies and prowling Arctic and red foxes. But no creature was more abundant than the mouselike singing voles, darting through rocky fields of talus — jumbles of rock fragments broken off the surrounding cliffs.

The tiny rodents pierced the air with alarm calls so frequently that it “almost feels like you have tinnitus walking around the island,” says Matsuoka.

Those rock fields of the island are also the buntings’ domain. There, above the uneven terrain, the researchers watched the males perform.

“It’s quite lovely,” says Richardson. The males flit upwards, locking their wings out flat and floating back down, singing all the while. “And they’ll do that over and over and over again, and each time they land, they usually land in the same spot.”

In the week before the team settled on the island, they worked from the research vessel, taking a skiff to different stretches of craggy coast, walking across the breadth of St. Matthew, spotting the buntings and recording their locations with GPS to build a map of their habitats. Thankfully, the white birds’ stark contrast against the brown and green tundra made them easy to identify and count.

Along with Arctic foxes and singing voles, red foxes are among the only land-dwelling mammals on the island. (Credit: Rachel Richardson)

Beyond the headcount, more data was waiting beneath the team’s boots — in tiny nests filling crevices between the massive boulders. McKay’s buntings make excellent use of their austere surroundings, turning a forbidding tract of boulders into a nursery. To take a peek at these well-hidden sanctuaries without damaging them, Richardson and her colleagues got creative.

They used borescope cameras — tiny LED cameras situated on the tip of long, flexible hoses, often used in plumbing to see in tight, winding places. After watching a bunting dive into the talus at a specific location, the researchers would feed the borescope into the rubble labyrinth to light up and view the nests. The team counted eggs and tracked the development of hatchlings without moving a single rock or touching any birds.

Weeks of peering into St. Matthew’s talus fields gave the researchers new data on nest survival rates and breeding timing, which they compared with previous surveys.

Very few of the nests failed in 2018 compared to 2003 and the 1980s reports; predators only devoured a small fraction of the hatchlings. This suggests that the island’s red foxes — thought to have colonized the island about 20 years ago — haven’t been hurting the birds’ numbers. Richardson says that the foxes can certainly dig and move some boulders to access nests, but nests deeper in the crevices may have an advantage — something the team wants to investigate in the future.

Curiously, the buntings seem to be nesting earlier and earlier in the spring. In the 1980s, the median date that the birds laid their first egg was June 27. In 2018, that had shifted weeks earlier, to June 5. Warming of the Bering Sea may be to blame.

“Climate would be one of the things that you would suspect,” Matsuoka says. He adds that the nesting habitat has apparently changed too, with past records showing buntings nesting on the beach and in driftwood logs, which was not the case during recent visits. This may be because much more upland habitat is available now thanks to earlier snowmelt.

When the team briefly returned to the island in summer 2019 to finish surveys, they noticed some buntings were still nesting as late as August — a period normally considered post-breeding season for Alaskan songbirds. Matsuoka says these birds are either re-nesting after an earlier failure or having a second nest in the same season. The latter scenario would be strange.

“That’s fairly common in temperate and tropical systems,” he says. “It’s quite unusual in northern areas.”

Going forward, the team hopes to make the bunting surveys far more regular, to better capture the population’s trajectory, and to figure out what the birds do in winter — other than sporadically turn up along Alaska’s sparsely inhabited western coastline. If the buntings are declining, filling in details about their annual life cycle could prove crucial.

Gathering newer information on the buntings’ status, says Richardson, tells researchers more than just how the birds are faring. “It’s important to kind of get a handle on what’s going on with [the buntings] and really understand what’s happening in the Bering Sea region as it’s being faced with all of these rapid [climate] changes,” she says.

It would be appropriate, after all, for the herald of a sweltering sea to be a living snowflake.

Jake Buehler is a science writer and journalist based on Washington’s Olympic Peninsula, where he reports on the wild, weird and unsung branches of the tree of life.