One more reason to fear fire ants: they build tunnels to maximize speed in their nests. 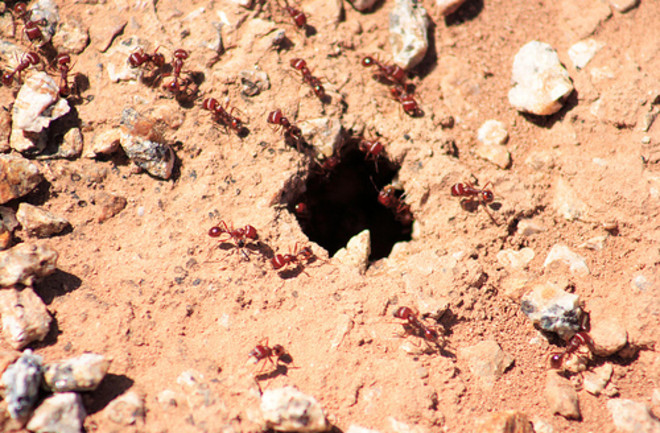 Photo: flickr/AZAdamHow fast can fire ants swarm out of their nests to come terrorize your worst nightmares, you ask? Nine body lengths per second. Nine! If I were to travel at nine body lengths per second, I would be zooming along at well over 30 mph. And this is not on an open road, it is in the complex, crowded, and often vertical tunnels inside the nest. So how do they do it without falling? According to this study, they not only use all of their appendages (including their antennae!) to brace themselves on their tunnel walls to prevent falling when they slip, but they also build their tunnels at the exact diameter that allows them to do this most effectively! (Be sure to check out the video below of the ants catching themselves after the researchers shake them to make them fall.)Climbing, falling, and jamming during ant locomotion in confined environments "Locomotion emerges from effective interactions of an individual with its environment. Principles of biological terrestrial locomotion have been discovered on unconfined vertical and horizontal substrates. However, a diversity of organisms construct, inhabit, and move within confined spaces. Such animals are faced with locomotor challenges including limited limb range of motion, crowding, and visual sensory deprivation. Little is known about how these organisms accomplish their locomotor tasks, and such environments challenge human-made devices. To gain insight into how animals move within confined spaces, we study the locomotion of the fire ant Solenopsis invicta, which constructs subterranean tunnel networks (nests). Laboratory experiments reveal that ants construct tunnels with diameter, D, comparable to body length, L = 3.5 ± 0.5 mm. Ants can move rapidly (> 9 bodylengths per s) within these environments; their tunnels allow for effective limb, body, and antennae interaction with walls, which facilitate rapid slip-recovery during ascending and descending climbs. To examine the limits of slip-recovery in artificial tunnels, we perform perturbations consisting of rapid downward accelerations of the tunnels, which induce falls. Below a critical tunnel diameter, Ds = 1.31 ± 0.02 L, falls are always arrested through rapid interaction of appendages and antennae with tunnel walls to jam the falls. Ds is comparable to the size of incipient nest tunnels (D = 1.06 ± 0.23 L), supporting our hypothesis that fire ants construct environments that simplify their control task when moving through the nest, likely without need for rapid nervous system intervention." Bonus supplementary video from the full text showing the ants' ability (or lack thereof) to catch themselves after slipping inside different sized tubes: