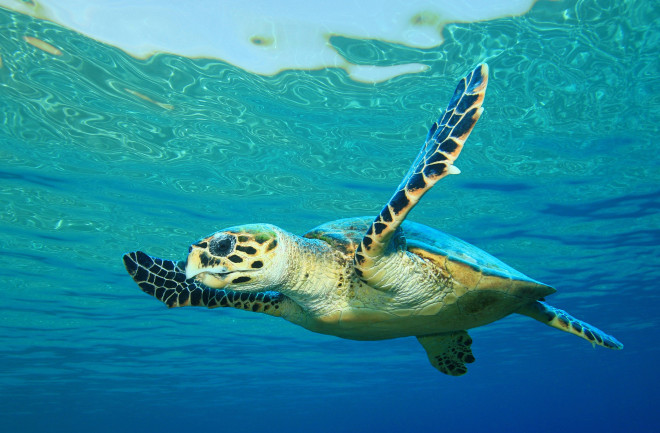 Many sea turtle species worldwide are threatened with extinction, but the hawksbill sea turtle is the closest to the brink, followed by its relative, the Kemp’s ridley sea turtle. The hawksbill grows slowly, breeds rarely and is exploited by humans, which has led to its demise. (Credit: Rich Carey/Shutterstock)

One million species face extinction, more than ever before in human history, according to a U.N. report released in May. And humanity is responsible.

The Intergovernmental Science-Policy Platform on Biodiversity and Ecosystem Services (IPBES) based the assessment on some 15,000 sources that consider the causes and consequences of environmental changes over the past 50 years.

The findings are stark. The authors found that about 25 percent of the world’s plants and animals are vulnerable to extinction. These include over a third of marine mammals and more than 40 percent of amphibians. Even domesticated animals are at risk: Over 9 percent of domesticated mammal breeds used for food and agriculture already may have been lost.

This rapid decline of the natural world endangers global food security and quality of life. For instance, an estimated 4 billion people rely on natural medicines, produced by the vanishing species, for their health care. And losses of species that pollinate plants would threaten up to $577 billion in crops each year.

The researchers identified five drivers responsible for the grim news. At the top of the list is land- and sea-use change: the conversion of ecosystems to agriculture, aquaculture and other human developments. It’s followed by the direct exploitation of organisms (overharvesting, logging, hunting and fishing) and climate change, including rising sea levels and increasing extreme-weather events, wildfires, floods and droughts. The final culprits are pollution — especially plastics — and the spread of invasive species, non-native organisms that can displace or kill native plants and animals.

The authors say only “transformative change” — such as a new global approach toward consumption and waste — could turn the tables. Whether that’s possible is an open question.

[This story originally appeared in print as "A Million Species in Danger."]