One Man Is to Blame for the Infamous Piltdown Man Hoax 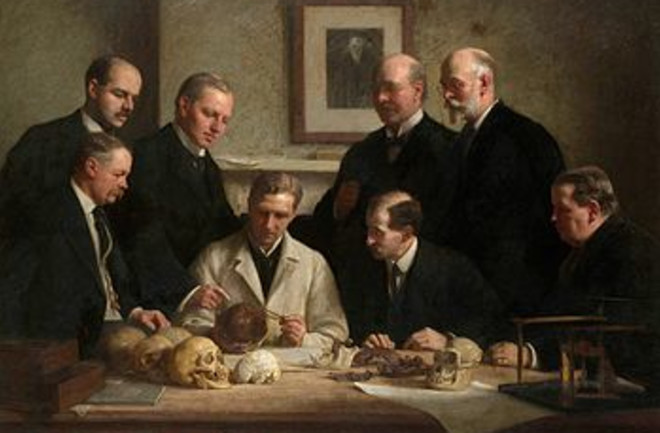 A 1915 painting depicts the bones being analyzed. Charles Dawson is third from the left. (Credit: John Cooke/Wikimedia Commons) A new study identifies the perpetrator of one of the most famous scientific hoaxes of all time. The hoax involved the purported discovery of the long sought-after missing link between apes and humans in a gravel pit near Piltdown, England. Charles Dawson, an amateur archaeologist hungry for fame, claimed to have found fragments of a skull that was part human and part primate. The find neatly filled a hole in the theory of human evolution—a little too neatly. The skull featured human and primate parts because that's exactly what it was, an amalgamation of two medieval human skulls and the jawbone of an orangutan. Now, we know who to blame for one of science's most infamous lies.

Suspects over the years have included a range of archaeologists involved with the find and even at one point Arthur Conan Doyle. But researchers from Liverpool John Moores University, employing a range of techniques including DNA sequencing and spectroscopy, determined Charles Dawson deserves all the blame for the forgery—after all, he was the only person involved with both the initial discovery in 1912 and a second "find" in 1915. They published their findings Tuesday in the journal Royal Society Open Science. In addition, they show that the teeth from both sites came from the same orangutan, which had likely died not too long before, adding further credence to the idea that Dawson was behind the forgery. The methods used to create the fake skull were similar in both cases as well, indicating that the same culprit was responsible. It appears Dawson was a fraud and not a very good one. The teeth and jawbone are cracked, likely from attempts to wrest the teeth from their sockets. These teeth were then ground down to resemble human teeth and re-inserted into the jawbone. The bones are covered in a reddish coating meant to make them look far more ancient—the coating covers up the dental putty Dawson used to fill in cracks and hold the teeth in place. He also inserted pebbles into cracks in the bones—also with the help of dental putty—to make the bones closer in weight to fossils.

Piltdown Man Had A Lasting Legacy

Dawson's discovery was met with initial acclaim and drove theories of human evolution for decades to come. The second find in 1915, consisting of more skull fragments, silenced Dawson's critics and cemented the discovery's legitimacy. It wasn't until 1953 that the hoax was conclusively debunked, when the then-new technique of fluorine dating—a measure of how much fluoride has leached into bones from groundwater over time—showed that the bones did not date to 500,000 years ago as originally claimed, but were actually relatively recent. Dawson died in 1916, long before his duplicity was discovered. Years later, researchers would discover that the Piltdown Man hoax was but the crown jewel in a long career of archaeological and paleontological forgeries. Beginning as far back as the late 1800s he supposedly discovered, among other things, teeth from a reptile-mammal hybrid, a stone axe from the Neolithic and three new species of dinosaur. He acquired some renown during his time and was even elected to several scientific societies in London. While the discovery of Dawson's forgery was embarrassing for the scientific community, it posed an even greater problem. Dawson's find was so compelling that researchers would base decades of theories on the Piltdown Man, an unwitting mistake that would set the field back significantly when the hoax was exposed. The Liverpool researchers say that his tale should serve as a cautionary example for researchers everywhere as to the pitfalls of undue credulity. They also argue that the specimen-hoarding practices that plague archaeology contributed to the longevity of the hoax, as most researchers at the time had only access to casts of the find, not the actual, faked bones.