One jump from gorillas to humans – the origin of malaria

Several million years ago, Plasmodium falciparum – the parasite that causes most cases of human malaria – jumped into humans from other apes. We’ve known as much for decades but for all this time, we’ve pinned the blame on the wrong species. A new study reveals that malaria is not, as previously thought, a disease that came from chimpanzees; instead it’s an unwanted gift from gorillas. Until now, the idea of chimps as the source of human malaria seemed like a done deal. Just last year, I covered a study which said that a related chimp parasite called Plasmodium reichenowi is the ancestor of P.falciparum. According to Stephen Rich from the University of Massachussetts, P.reichenowi crossed the species barrier from chimps to humans just once in history – a defining moment that gave rise to P.falciparum. But to Weimin Liu from the University of Alabama, something wasn’t quite right. People seemed to have settled on a chimpanzee conclusion without thoroughly testing for Plasmodium in other apes. Fortunately, Liu’s team was well placed to fill in those blanks. For their research, they had already amassed a massive collection of ape faeces: an unenviable collection of 1,827 samples from chimps, 805 from gorillas and 107 from bonobos. Virtually all of these samples came from wild apes with little human contact; only 28 came from a habituated group of gorillas. Liu scoured all of these samples for Plasmodium DNA, sequenced what he could find, and built a family tree that charted the evolutionary relationships between them. His results were very clear. For a start, Plasmodium parasites don’t infect either eastern gorillas or bonobos, but they do infect chimpanzees and western gorillas. That narrows down the source of human malaria to these two apes. Liu also found that all of the samples of P. falciparum taken from humans were most closely related to a single lineage of gorilla parasites. P.reichenowi is an exclusively chimp parasite, belonging to a different branch of the Plasmodium family tree. The answer was clear: P.falciparum did not evolve from P.reichenowi and it didn’t come from chimpanzees. Instead, it jumped into humans from western gorillas. 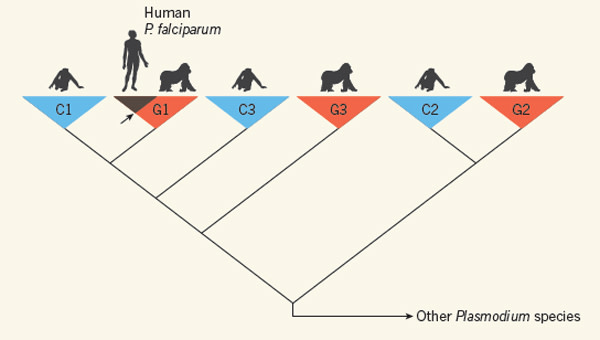 These conclusions are unique, but they are backed up by a juggernaut of data. Rich’s last study included around a hundred samples, while Liu looked at more than 2,700. Julian Rayner who helped to lead the study says, “This scale brings things into sharper focus, and adds power to the conclusions.” Rich himself puts it simply: “They have more data. They sampled another set of organisms that we weren’t able to. It’s a very commendable piece of work and they included a large number of gorillas that we didn’t have access to.” Even with this data, the study wasn’t easy. During the study, it became clear that apes are often plagued by many species of Plasmodium at the same time. This posed a big problem. To get enough DNA for sequencing, the team had to amplify the small traces in their samples many times over. But with so many different types of Plasmodium kicking around, they ended up fusing pieces of DNA from different species, producing misleading hybrids. To get around that, Liu and Rayner teamed up with Beatrice Hahn and George Shaw. They had pioneered a method for studying people with HIV, who may be infected with several genetically different viruses. Their technique, known as “single genome amplification”, relies on diluting the original sample so that you can be sure you’re starting off with just a single molecule of DNA. Rayner says, “When we applied this approach, the analysis literally fell into place” Liu’s family tree also showed that all Plasmodium parasites are very loyal to their hosts. He outlined six distinct groups: three of them infect chimps and only chimps, while the other three are only found in gorillas. Even if both hosts are found in the same place, their parasites don’t mix. An individual might harbour a variety of Plasmodium strains, but they would all be exclusive to that particular ape. Nonetheless, it’s clear that Plasmodium can occasionally make the leap from one host to another, rare though such leaps may be. For example, the transition from gorillas to humans happened just once in history and today, every sample of the human parasite shares a single ancestor. This was “Malarial Eve”, the parasite that kicked off a legacy of infections that kills millions of people every year. Rayner is concerned whether the jump from gorillas to humans could happen again, or even whether it’shappening now.He says, “There just haven't been enough human samples analyzed to know for sure. What we urgently need to do is to test individuals who live in close proximity with populations of other apes and establish whether they ever get infected with their Plasmodium species. If they do, it has important implications for how we think about malaria control and elimination strategies, because apes could serve as a source of new infections in humans.” In the meantime, it seems that humans have managed to pass on our unwanted gift to another ape: bonobos! Four samples of Plasmodium were recently taken from captive bonobos, and their DNA is closely related to sequences from humans but not gorillas. If that wasn’t enough of a giveaway, the bonobo parasites also had mutations that are commonly found in human parasites, which allow them to resist common malarial drugs. They probably contracted the infections from mosquitoes that bit their human handlers. All of this might seem like an academic exercise, but understanding the origin of malaria is important for working out why this disease poses such a problem to human health. P.falciparum is one of four Plasmodium species that regularly infects humans but it causes almost all of the deaths. “By comparing human P. falciparum to its immediate ancestor in western gorillas, we may be able to understand how it became adapted to humans, and what the differences are that make it particularly deadly to us,” says Rayner. Reference: Nature http://dx.doi.org/10.1038/nature09442Image of gorilla by Ian Nichols and the National Geographic Society; tree from Nature. More on malaria: