One generation, new species – all-female lizard bred in a lab 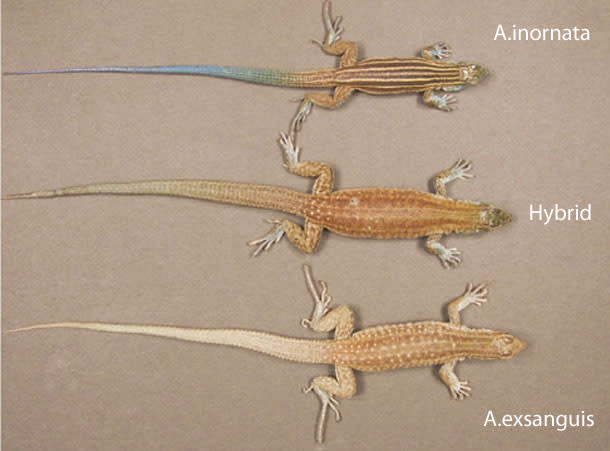 In a lab in Kansas, Aracely Lutes has created a new species of all-female lizard that reproduces by cloning itself. There wasn’t any genetic engineering involved; Lutes did it with just a single round of breeding. This feat stands in stark contrast to the slow pace at which species usually arise. Here’s the typical story: different populations become separated in some way, whether by space, time, predators, sexual preferences, or an inability to understand one another. Differences gradually build up between them, until they can no longer produce fit and fertile offspring. Voila – where there was once one species, there are now two. There are exceptions to this recurring tale of slow divergence. Different species sometimes mate to create hybrids, whose genomes are a mash-up of those of their parents. These individuals are often infertile (think mules) or weak. But in rare cases, they survive and prosper. For example, there is a hybrid bat from the Caribbean that combines the genomes of three separate species, one of which is now extinct. Other mammals including the red wolf and stump-tailed macaque might also be hybrids. More and more, scientists are discovering that these fusion animals are a surprisingly common part of life’s history. Some groups are exceptionally good at making hybrids. The North American whiptail lizards (Aspidoscelis) are grandmasters at it. Of the twelve species in New Mexico, seven of them are hybrids. For example, the New Mexico whiptail (Aspidocelis neomexicana) was born when the Western whiptail (A. inornata)mated with the little striped whiptail (A. tigris). In these unions, the origin of a new species happens in an instant. The hybrid lizards have genomes that are distinct from their parents. These distinct genomes stay distinct for the new hybrids don’t mate with their parental species. They have the ability to reproduce without sex – they are always female and their daughters are all clones of their mothers. The genomes of the living lizards testify to their weird origins, but it’s much harder to actually witness these beginnings. When scientists find first-generation hybrid whiptails in the wild, they’re almost always sterile. One group even spent 29 years trying to breed a new hybrid species in the lab, a project that involved 230 lizards, nine species, five sterile hybrids, and zero success. There has been one tantalising exception to this catalogue of failure. In 1967, William Neaves (who was also involved in this new study) described two eggs that had been laid by a hybrid lizard, the offspring of a Western whiptail (A.inornata)and a Chihuahuan spotted whiptail (A.exsanguis; itself a hybrid). The lizard seemed fertile, but its eggs dried out before they could hatch. No one could prove that the hybrid would truly have raised viable young. But that was enough for Lutes. She set about trying to breed a hybrid whiptail, using the same combination of parent species that Neaves described. She succeeded. Lutes recovered six eggs that had all been produced by the same A.exsanguis female and the same A.inornata male. All six hatched. The young lizards were similar in size and pattern to A.exsanguis, but from A.inornata, they had inherited a subtle blue tint in their tails. They have four copies of every gene rather than the standard two – three inherited from their mother and one from their father. And they are most definitely fertile. Four of them, all female, managed to clone themselves. So did their daughters and granddaughters. These four lab-raised dynasties are now in their third generation, with 68 members in their family. It’s dramatic proof of the process that supposedly gave rise to many of New Mexico’s other whiptails. Do these lizards count as a separate species? Peter Baumann, who led the study, thinks so, but he says it “depends on who you ask”. This is why he hasn’t given the hybrids a formal name. “The whole topic of naming new species can be controversial and we did not want to distract from the scientific finding by drawing attention to the issue of naming. Under the assumptions that these lineages will continue to thrive, we will at some point need a name for them,” he says. In the meantime, the lab-reared hybrids raise a new suite of questions. Would they thrive in the wild, in competition with their parents? Certainly, in the lab, the hybrids can capture live crickets and beetles as effectively as their parents, even in direct competition. Maybe Lutes’ lizards are “the prototype of a species that might eventually emerge in the deserts of the southwestern US or northern Mexico.” Or perhaps their wild counterparts exist and haven’t been found. “Either these animals have been misidentified as A.exsanguis or there is an ecological reason that they cannot persist in nature,” says Baumann. “We are presently pursuing both ideas.” Reference: Lutes, Baumann, Neaves & Baumann. 2011. Laboratory synthesis of an independently reproducing vertebrate species. PNAS http://dx.doi.org/doi/10.1073/pnas.1102811108More on hybrids: