One gait-keeper gene allows horses to move in unusual ways 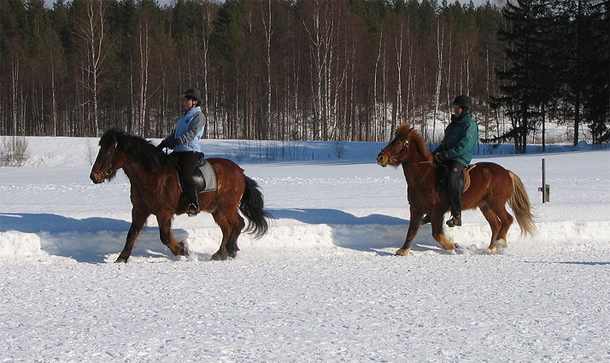 Icelandic horses can move in an odd way. All horses have three natural gaits: the standard walk; the two-beat trot, where diagonally opposite pairs of legs hit the ground together; and the four-beat gallop, where the four feet hit the ground in turn. To those, Icelandic horses add the tölt. It has four beats, like the gallop, but a tölting horse always has at least one foot on the ground, while a galloping one is essentially flying for part of its stride. This constant contact makes for a smoother ride. It also looks... weird, like watching a horse power-walk straight into the uncanny valley. [embed width="610"]http://www.youtube.com/watch?v=-7rWeWymJDw[/embed] The tölt is just one of several special ambling gaits that some horses can pull off, but others cannot. These abilities can be heritable, to about the same extent that height is in humans. Indeed, some horses like the Tennessee Walking horse have been bred to specialise in certain gaits. Now, a team of Swedish, Icelandic and American scientists has shown that these special moves require a single change in a gene called DMRT3. It creates a protein used in neurons of a horse’s spine, those which coordinate the movements of its limbs. It’s a gait-keeper. Leif Andersson, one of the leaders of the study, was completely surprised by the discovery. “There are hundreds of genes that contribute to variation in height in humans, and each has a tiny effect. Gait in horses sounds like it should be at least as complex a trait.” It’s not. By itself, DMRT3 explains much of the difference between horses that stick to the normal trinity of walk/trot/gallop, and those that adopt special gaits. Lisa Andersson sequenced 30 four-gaited Icelandic horses that can tölt as well as walk, trot and gallop, and 40 horses that added a fifth gait—pace, where the legs on the same side of the body hit the ground together. She scoured their genomes for single mutations that were more common in the pacing animals, and found one. By sequencing the full genomes of two of the horses, she pinpointed the mutation to a gene called DMRT3. Meanwhile, Klas Kullander had been searching for genes that are active in the spines of mice, and seem to control gaits. His group had independently identified DMRT3 as an important gene. “When they heard about our horse discovery, they were really excited,” says Andersson. DMRT3 creates a protein that controls the activity of other genes. In the five-gaited horses, both copies of DMRT3 carry a mutation that shortens the protein, creating a stunted finished product. When the team sequenced 352 Icelandic horses and found that all the pacing animals have two copies of the shortening mutation. When they looked at other breeds, they found that the DMRT3 mutation is extremely common in those that show alternative gaits. Almost all Tennessee walking horses have it. So do all Peruvian pasos. So do all Kentucky mountain saddle horses. Even among the four-gaited Icelandic animals, which can tölt but not pace, two thirds of the animals carry at least one copy of the mutation. By contrast, it’s absent in all horses that stick to the standard walk, trot and gallop. Thoroughbreds, Shetland ponies, wild Przewalski’s horses—all of them have unabridged DMRT3 proteins. The conclusion is stark: for a horse to move beyond its three natural gaits, it needs a stunted version of the DMRT3 protein. What does DMRT3 do? Genetic manipulations held the answer, but since horses aren’t exactly easy to study in a lab, so three of Kullander’s team –Martin Larhammar, Fatima Memic and Hanna Wootz – turned to mice. They found that DMRT3 is active in a special class of ‘interneurons’ in the spines of developing mice, which coordinate the movements of the limbs. They connect to the flexor and extensor muscles that move the rodents’ legs. They also cross the spine to connect the right and left side of the body. If mice lack any working copies of DMRT3 gene, these neural circuits don’t develop properly. The mice learn to compensate for their problems, so the adults seem outwardly normal, but newborn pups are different. “You see very disturbed signalling patterns in their spine,” says Andersson, “and there was a really strong defect in how they coordinate their hind legs.” In the adults, these problems came to the fore whenever they had to run. They walked normally, but the coordination between their legs broke down at high speeds. The same is true for horses, and explains why the DMRT3 mutations are almost non-existent in the wild. Carriers find it hard to transition from trots and paces to full-blown gallops. They lack the coordination necessary to pull off the fastest gait, and predators would easily have removed them from the gene pool. Humans were kinder, and saw a different sort of potential. Andersson imagines that early humans noticed that some horses could move in unique ways, and selected them for breeding, perhaps because they offered a smoother ride or were more versatile at intermediate speeds. Certainly, these animals also do very well in harness-racing, where trotting horses are disqualified if they break into a gallop. In our stables and tracks, an otherwise debilitating mutation has found a comfortable home. Reference: Andersson, Larhammar, Memic, Wootz, Schwochow, Rubin, Patra, Arnason, Wellbring, Hjalm, Imsland, Petersen, McCue, Mickelson, Cothran, Ahituv, Roepstorff, Mikko, Vallstedt, Lindgren, Andersson & Kullander. Mutations in DMRT3 affect locomotion in horses and spinal circuit function in mice. Nature http://dx.doi.org/doi:10.1038/nature11399Image by Paula JautunenMore on the genetics of domestication: