On the Galapagos Islands, an Evolutionary Puzzle That Darwin Missed 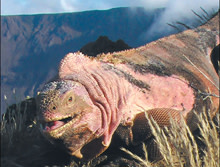 On the slopes of the Wolf volcano at the northern tip of one of the Galapagos Islands prowls a pink iguana, which until recently had entirely escaped the notice of the island's visitors--including the eagle-eyed Charles Darwin. But now researchers have spotted the rosy reptile and declared it a new species, which diverged from the Galapagos's other land iguana species about 5.7 million years ago. Says lead researcher Gabriele Gentile:

"What's surprising is that a new species of megafauna, like a large lizard, may still be [found] in a well-studied archipelago" [National Geographic News].

The creature was first noticed by park rangers on the island of Isabela in 1986, but researchers only began to study the animal in the last few years. A genetic analysis revealed that the pink iguana was quite distinct from the two known land iguana species, but the date of their genetic divergence poses a puzzle.

"At 5.7 million years ago, all of the western islands of the archipelago did not exist," said Gabriele Gentile.... "That's a conundrum, because it's now only inhabiting one part of Isabela that formed less than half a million years ago" [BBC News].

In fact, even the oldest parts of the current archipelago may be less than five million years old, researchers say. One possible explanation is that volcanoes that are now underwater may have been above the waves millions of years ago, allowing some marine iguanas to clamber onto those shores and begin evolving. The new species, which is described in the Proceedings of the National Academy of Sciences [subscription required], doesn't yet have an official scientific name; the International Commission on Zoological Nomenclature will first have to rule that it is indeed a distinct species. But no sooner was the pink iguana identified than it was declared endangered.

Gentile and colleagues say the animal's population is "alarmingly small." Feral cats introduced to the island may be eating the young reptiles, and goats may be competitors for food, Gentile said. "We desperately need more funds to keep on doing our best to investigate and protect this newly recognized species," Gentile added, "before it becomes extinct" [National Geographic News].

Darwin visited the Galapagos Islands in 1835 and made a fairly thorough survey of their inhabitants, but he bypassed the Wolf volcano and therefore didn't spot the pink iguana. If he had caught a glimpse of it, however, his writings suggest that he wouldn't have been impressed.

Of the island's famous marine iguanas, Darwin had this to say: "hideous-looking creatures, of a dirty black colour, stupid and sluggish in their movements", though he added in his diary that the animals swam "with perfect ease and swiftness". He didn't think much of land iguanas either: "hideous animals, but are considered good food" [New Scientist].