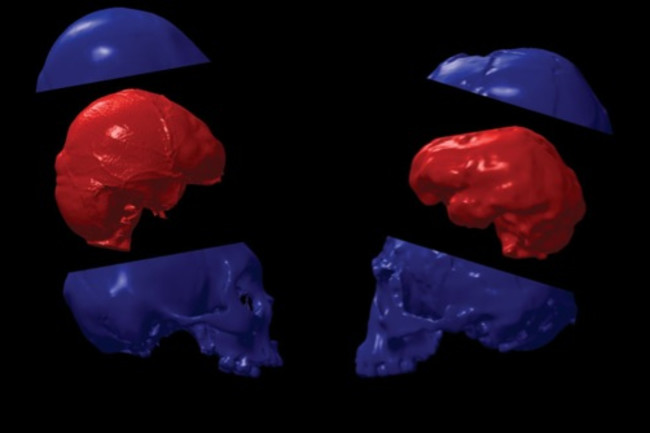 Could 2007 see some new hobbits? I certainly hope so. In October 2004, a team of scientists announced they had found bones of a hominid from the Indonesian island of Flores. They came to the astonishing conclusion that the bones belonged to a new species, which they called Homo floresiensis, which stood only three feet tall, lived as recently as 12,000 years ago, had a chimp-sized brain, and could use stone tools to hunt. That announcement launched an extraordinary debate, with scientists arguing in favor of tiny hominids (nicknamed Hobbits), or a dwarf with a birth defect, or an unusually evolved population of humans. For a timeline, see this post I wrote in this past October, surveying two years of controversy. 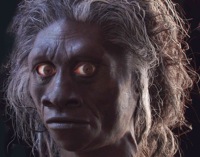 It's been a quiet winter on the H. floresiensis front, but for some odd reason a few pieces of intriguing news have come up in just the past couple days. In the Proceedings of the National Academy of Sciences, a team of scientists led by Dean Falk of Florida State look once more at the shape of H. floresiensis's brain and compare it to the brains of humans. One major objection to the idea that the hobbits are a separate species comes from critics who claim its small skull could have been caused by a genetic defect known as microcephaly. In 2005 Dean Falk and co. recreated the hobbit's braincase from one fossil and then compared it to, among other things, a human microcephalic brain case. At the time they concluded it had a distinctive shape not seen in microcephalics. Critics then responded with a lot more microcephalic skulls and the argument that microcephaly can take a staggeringly wide range of possible shapes. And some of the microcephalics they found seemed to have hobbity braincases. So now comes the new paper from Falk. In it, she and her colleagues compare nine microcephalic brains and a dozen normal human ones. (The picture above shows a reconstruction of one microcephalic on the left and Homo floresiensis on the right.) The scientists identified some key traits that they could use to classify brains as normal or microcephalic with complete accuracy. Although microcephalics do vary a lot in some ways, the researchers found that their cerebellum (a lump in the back of the brain important for motor control) protrudes and bulges a lot compared to a normal cerebellum. They also have narrow, flattened orbital lobes. According to this standard, Homo floresiensis is not a microcephalic. (The paper is not online yet, but when it goes up, this link will work: http://www.pnas.org/cgi/doi/10.1073/pnas.0609185104) Robert Martin of the Field Museum, one of the biggest critics, is not buying it. This National Geograpic article has a bit of back-and-forth between him and Falk on the finer details of how to measure brains properly. Richard Potts of the Smithsonian is quoted telling all these scientists to "step outside the black box of the brain they've gotten themselves into." It is certainly striking how so much of the debate has revolved around the brain of Homo floresiensis, and how all of the information scientists have about its brain comes from a single fossil. Scientists have indeed found other bones from the same cave from different ages, such as a jaw and limb fragments, but they've attracted much less attention. There could be, in theory, so many other sources of information, from the skulls of other individuals to more limb bones to DNA. But prospects for this other kind of information have seemed very bleak. A conflict between researchers ultimately led to the Indonesian government closing off the cave where the fossils were found in 2005. In a December feature on Homo floresiensis in the journal PLOS Biology, Tabitha Powledge reported that attempts to get DNA from the bone had failed. The world was left to gaze at the single braincase like an inscrutable Eight Ball. Now there seems to be some cause for hope. Potts, for example, hints in the NG article that there will be new studies coming out on other parts of Homo floresiensis that will support Falk. And the team of Australian and Indonesian scientists who originally found Homo floresiensis have been doing some more work on the material they got from the cave. As the Sydney Morning Herald reports, they suspect that modern humans wiped out the hobbits. Bones ascribed to hobbits range from 95,000 to 12,000 years ago. Younger cave deposits include modern human bones. A layer of ash lies on top of the most recent hobbit bones, which prompted the scientists to suggest that a devastating volcanic eruption wiped out Homo floresiensis, and modern humans later colonized a hobbit-free island. But now, according to the Herald, it appears that the eruption took place about 600 kilometers to the west. At that distance, the volcano probably didn't wipe out life on Flores. So perhaps modern humans arrived on Flores and quickly drove the hobbits extinct. One possibility is that they hunted the pygmy elephants on which the hobbits may have lived. (It doesn't appear that the results are published yet.) But the biggests ray of hope comes from the fact that the cave is now open for business again. The details of the negotiations are vague, but the scientists are set to be back in the cave this spring. I was particularly struck by Mike Morwood's comment to the Herald that researchers will also be heading for the nearby island of Sulawesi, a much bigger land mass that's also much closer to southeast Asia, from which the ancestors of Homo floresiensis came.

This island was the most likely source of the hobbits' ancestors. "My guess is that hominids arrived on Sulawesi a long time before a small group were somehow washed out to sea, to be deposited on Flores," he said. "It is now the place with real potential to surprise."

To discover a chain of hominid species stretching from the mainland out to Flores would be cool beyond belief. When did the dwarfing begin, one wonders? Was there a Homo sulawesiensis before a Homo floresiensis? Or were the only hominids exploring these tropical islands members of our own species? Here's hoping 2007 provides some answers. [Image: Kirk E. Smith, Electronic Radiology Laboratory, Mallinckrodt Institute of Radiology]