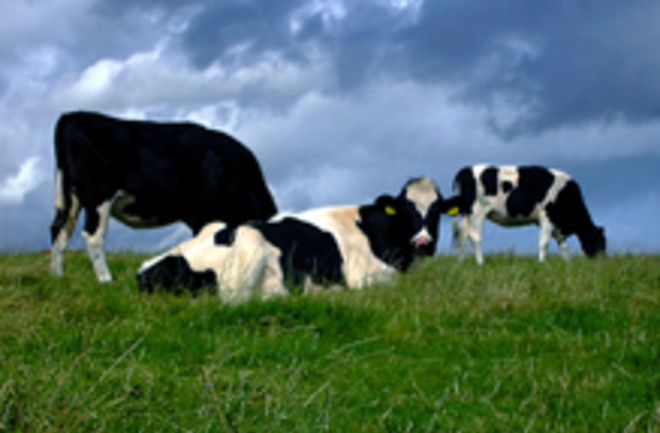 It's not just humans who can take part in combating global warming--cows can play a role, too. Scientists say that the methane belched up by cows is a significant source of the greenhouse gas, and are searching for ways to reduce these burps. The digestive bacteria in the cows' stomach produces the methane, which is the second-most significant gas (behind carbon dioxide) driving global warming. While methane is much less prevalent in the atmosphere than carbon dioxide, it traps heat 20 times more efficiently than carbon dioxide. Researchers are examining a variety of tactics, including breeding or genetically engineering cows that belch less, or adjusting the bacterial mix in cows' stomachs. But altering the cows' feed has shown the most promise thus far.

Since January, cows at 15 farms across Vermont have had their grain feed adjusted to include more plants like alfalfa and flaxseed — substances that, unlike corn or soy, mimic the spring grasses that the animals evolved long ago to eat. As of the last reading in mid-May, the methane output of [one test] herd had dropped 18 percent. Meanwhile, milk production has held its own [The New York Times].

Researchers say the spring grasses that cows ate for millions of years are high in omega-3 fatty acids, which may help the cows' digestive tracts operate smoothly. In contrast, the corn and soy feeds that factory farms rely on to quickly fatten their cattle have a different fatty acid structure, which causes more methane production. The trial in Vermont was spearheaded by the yogurt company Stonyfield Farm, which buys its organic milk from Vermont farms. Researchers say that if the test results influence large-scale industrial farms, the impact could be significant. Air quality expert Frank Mitloehner, who

places cows in air-tight tent enclosures and measures what he calls their “eruptions,” says the average cow expels — through burps mostly, but some flatulence — 200 to 400 pounds of methane a year [The New York Times].

Related Content: 80beats: Cow Genome May Allow Farmers to Breed a Better Milk Cow DISCOVER: All Aboard the Cow Train explains how cow pies can be turned into fuel DISCOVER: 10 Ways Methane Could Brake Global Warming--or Break the Planet