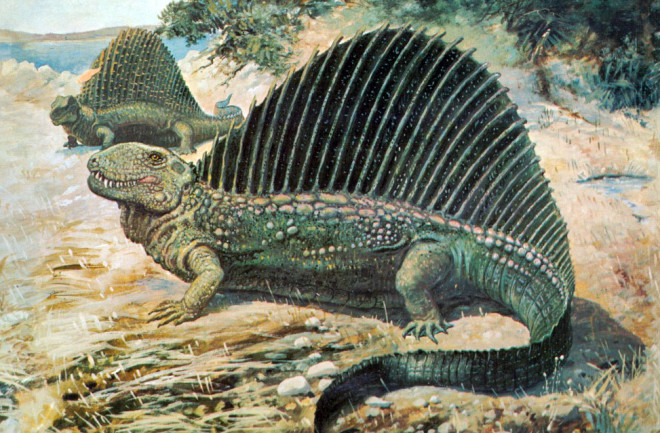 In one of Charles R. Knight's famous 19th century paintings, an Early Permian dimetrodon (don't call it a dinosaur!) seems to be enjoying itself, happy and carefree, with no idea about the mass extinctions on the horizon. (Credit American Museum of Natural History/Wikimedia Commons) It's the mass extinction you probably haven't heard about, because for a long time researchers have questioned whether it even existed. But a growing body of evidence, including a study published today, has strengthened the case for Olson's Extinction — which played a role in our species eventually dominating the planet, for better or worse (mostly worse). For whatever reason, people seem to dig mass extinctions. At least the ones in the past. Far fewer folk are entertained by (or even aware of) what many researchers are calling the sixth mass extinction, going on right now and all thanks to our own meddling species. But I digress. The fossil record provides ample evidence for five big mass extinctions, most infamously the Great Dying at the end of the Permian (or end-Permian, if you want to be a cool paleo-nerd). That was when, about 250 million years ago, some 90 percent of marine species and more than 70 percent of land species shuffled, swam or slithered off this mortal coil. (For many people, what springs to mind when they hear the term "mass extinction" is likely the end-Cretaceous event of 66 million years ago, when a number of species, including all the dinosaurs that weren't birds, went buh-bye. But for sheer biodiversity-crushing scale, the end-Permian wins the deathrace, hands down.)

Some 66 million years ago, the end-Cretaceous extinction event killed off the dinosaurs and other animals, but it wasn't the biggest die-off. And yes, I mentioned the end-Cretaceous in the previous paragraph just to have an excuse to post this delightfully dramatic rendering. This one goes out to all the people a little too into extinction level events. (Credit: National Science Foundation/Zina Deretsky) We don't know what caused the Big Five previous mass extinctions, though a number of researchers have proposed that they're cyclical and extraterrestrial in nature — note: the jury is still out on both counts for now. Scientists can't even agree on what was the main catalyst for the end-Cretaceous event: While many adhere to the Chicxulub asteroid impact theory, a smaller camp puts most of the blame on massive volcanic eruptions that created the Deccan Traps in India. Two things we do know: In addition to the Big Five, there have been a number of smaller but still consequential mini-mass deaths, and every die-off, from the Great Dying to the Not-So-Great, wreaks havoc with environments and established ecological hierarchies. The end-Cretaceous, for example, by bumping off the non-avian dinosaurs, cleared the way for what were, at the time, ankle-biter mammals to expand territory and diversify. Olson's Extinction Fills a Gap Into all this death and destruction comes the long debate about Olson's Extinction, sometimes still called Olson's Gap. In paleontology (and many other fields), researchers are rarely handed a nice neat scientific advance all wrapped in a bow. The fossil record we have now started out with bits of bone here and there in places people bothered to look. Over the last two centuries (and that's really the whole span that humans have been looking for fossils in any sort of methodical way), the numbers of fossils added to the record, and their diversity across time and geography, have been nothing short of thrilling. But there's still work to do. There are number of spots in the record that are still big question marks. I've written before about one of them, Romer's Gap, which started roughly 360 million years ago, just as the first terrestrial vertebrates were evolving. Fortunately, recent finds in Scotland, Canada and a potential site in the U.S. have begun to fill in that big blank in the fossil record. Romer's Gap appears to have been simply people not looking in the right place for fossils of a given period. It's what researchers sometimes call a sampling bias. Now we come to Olson's Extinction, nee Olson's Gap, around 272 million years ago. It's a similar sort of hole in the fossil record. But in this case, it appears that the lack of fossils is due to a big die-off. To The Memory of Dimetrodon Before Olson's Extinction, terrestrial vertebrate life in the Early Permian was dominated by a rich array of amphibians and pelycosaurs, including sail-backed dimetrodon, the animal most commonly mistaken for a dinosaur. (Nope. Not even close. Dinosaurs evolved along a completely different branch and wouldn't show up for more than 20 million years after Olson's Extinction. So stop putting dimetrodon in dollar store "toy dinosaur fun packs." Seriously, people.) Pelycosaurs are a primitive type of synapsid and if you're starting to think too many paleojargony words, hang in there. Because you'll be interested in where I'm going with all this. After Olson's Extinction, pelycosaurs all but vanished. During the Middle Permian and continuing for several million years until the Great Dying (circa 252 million years ago), amphibian diversity dropped off big time and life on land was dominated by therapsids, a more advanced branch of synapsids.

A gorgonopsian, part of the therapsid crew at the top of their game by the Late Permian. I shall call him Jafar. (Credit Alannis/Wikimedia Commons) One group of therapsids, the cynodonts, made it through the Great Dying and eventually evolved into mammals, including Homo sapiens. So see? It really was all about you. A Question of Latitude But enough about you, let's talk more about Olson. Specifically Everett C. Olson, the American paleontologist who in the mid-20th century started to write about the gap/extinction event that now bears his name. For the past 70 or so years, researchers have debated whether the apparent gap was the result of sampling bias or a mass extinction event. One complication in sorting it all out was the lack of geographic continuity in the fossil record. Earlier fossils from the Glory Days of Dimetrodon and other pelycosaurs were almost exclusively from areas of North America and Western Europe which, in the Early Permian, were nearer to the equator. Meanwhile, post-Olson event fossils from the Middle and Late Permian came almost entirely from Russia and South Africa, both of which sat in temperate latitudes. No continuity in the fossil record has meant contention among paleontologists. One 2013 paper, for example, cites the Olson Affair as a matter of switching sampling bias from species-rich equatorial regions to species-poor cooler climes — that typical distribution of species, by the way, is called the latitudinal biodiversity gradient (LBG), and it's going to get shot through the heart in a few paragraphs. Published today in the Proceedings of the Royal Society B, however, the latest volley in the Sampling Bias v. Megadeath debate has made a convincing case for the latter: Olson's Event was indeed a mass extinction extravaganza. The Devil Is In The Data Using current biostratigraphy (dead stuff found in dateable rock layers) and highly refined data-crunching methods, the team behind today's study tested both the sampling bias and mass extinction hypotheses against information from throughout the Permian fossil record. And they found that a sampling bias is not supported. Instead, there appears to have been a mass extinction — Olson's Extinction — at the end of the Early Permian or start of the Middle Permian. That die-off shuffled the ecological hierarchy enough to get the pelycosaurs out of the way and set the stage for the therapsids, which led to the cynodonts which led to, after quite some time, our own species (Remember: all about you). The researchers caution that whatever caused Olson's Extinction (we still don't know that), it affected different latitudes differently. Après-extinction event, higher-latitude species seemed to diversify at a more rapid pace compared with equatorial species. That would make sense if equatorial species were harder hit by the extinction, which leads us to: RIP, LBG (At Least Sometimes) LBG, the pattern that has been true for more than 20 million years, tells us we'll find more species diversity at lower latitudes and less of it at higher latitudes. Paleontologists have found, however, that the LBG hasn't always held true further back in the fossil record. In fact, it's looking more and more like the period around Olson's Extinction was one of an inverted LBG: The equatorial region had less diverse life than the higher latitudes. Wait, these researchers are just making this all up to fit what they want to be true, I hear you grumbling, to which I reply, Au contraire, mon petit cynique. We've got decent enough climate data from this portion of the Permian to believe that Earth was heating up and drying out, so living at or near the equator would have been less hospitable, even though, you know, it's a dry heat. P.S.: While today's paper points to an inverted LBG during the Olson's Extinction timeframe, a study out last week in Science hints that climate change might just be nudging the world in that direction again. As Earth heats up, more flora and fauna are moving to higher latitudes. It's too early to say whether the shift in biodiversity will be substantial enough to invert the LBG — or how many species will go the way of dimetrodon.

Long-dead Dimetrodon, which slipped the surly bonds of Earth well before Olson's Extinction but remains the most recognizable species of the Early Permian...not the Age of Dinosaurs. (Credit Dylan Kereluk/Wikimedia Commons)