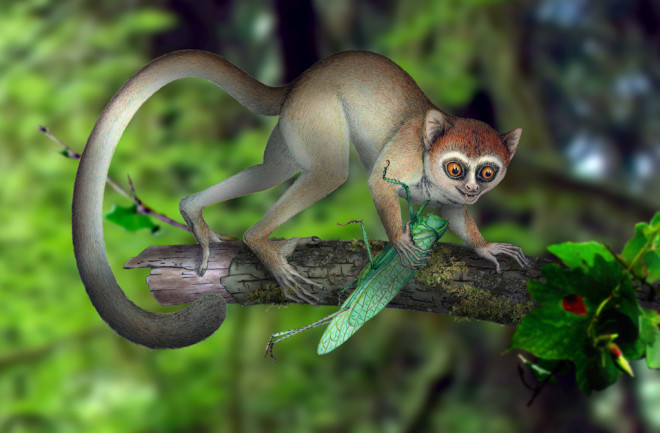 Artist's reconstruction of the early primate. Image courtesy of Xijun Ni. The fossil of an ancient primate found in China, Archicebus achilles, is the most well-preserved primate skeleton of its kind and one of the oldest yet discovered. It should fill in some much-needed blanks on the primate family tree and provide insight about our Eocene ancestors. A farmer uncovered the fossil in a lakebed in China's east-central Hubei Province a decade ago. Researchers used a synchrotron, a source of extremely high-powered X-rays, to visualize the near-complete skeleton without having to remove it from the surrounding rock and risk damaging its fragile frame. They determined that the tiny, long-tailed animal would have been about the size of mouse, weighing in at just under an ounce. Its sharp teeth point to a diet of insects, and its small eyes suggest that it hunted during the day, not at night. The kicker, though, is the primate's heel, hence the achilles in its name. The skeleton is the earliest known fossil from the branch of the primate family tree that leads toward present-day tarsiers, yet the structure of the heel bones suggests it leapt through the forest more like our modern monkey relatives than the vertically oriented tarsiers. This narrows down the window of time in which tarsier-type primates split off from the rest of us, including monkeys, apes and humans, according to the paper published in Nature yesterday. Scientists say the 55-million-year-old Archicebus achilles confirms the early divergence of these two groups, and gives us an idea of how our latest common ancestors may have looked and lived.

Digitized reconstruction of the fossilized skeleton. Image courtesy of Nature.