Oldest Trace Fossils Ever Found Might Not Be Fossils 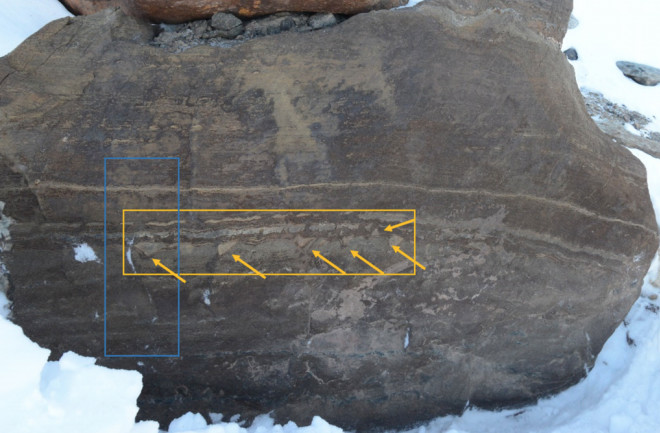 Fossil or faux pas? A 2016 study that interpreted rock anomalies as the oldest evidence of life on our planet got it wrong, say researchers behind a new analysis of some of the same rock. The deformities aren’t relics of early microbial life, says the team, but rather a snapshot of geological forces shaping and reshaping our world.

The race to find the very first sign of life on Earth is one of the more heated contests in science — even though, for some, it lacks the glamour of hunting dinosaur fossils or uncovering our own hominin family tree. Instead, the work typically involves analyzing the oldest rocks on the planet for geochemical signatures and trace fossils such as stromatolites, which are layered structures that are formed by microbial activity and deposited in sediment.

Several contenders for evidence of the earliest life have emerged in recent years. Just in 2017, two significant studies from separate teams claimed to have found 3.5 billion-year-old microfossils from Australia and, from 3.77 billion-year-old Canadian rock, evidence of microbes living in seafloor hydrothermal vents. But the conclusions remain controversial and no clear winner has emerged.

In Nature in 2016, researchers described anomalies in rock from southwestern Greenland that appeared to be conical structures, ranging in size to about 1.5 inches tall. The authors interpreted the anomalies as stromatolites, trace fossils of early microbial life. Stromatolites form as microbial communities deposit minerals in the sediment where they live, and build up over time into cone- or dome-shaped structures.

Here’s the problem: While the Greenland rocks are indeed some of the oldest on the planet, they have not escaped the geological forces that are constantly building up and tearing down Earth’s crust. Even these rocks have been subjected to heating, squishing, twisting and other deformation. It’s not clear whether the anomalies are the result of microbial populations or geological shenanigans (and therefore non-biological in origin).

A second team took another look at a portion of the rock sample analyzed in the 2016 paper and concluded that the earlier findings don’t hold up. According to the new research, the anomalies lack the internal layers that are a hallmark of stromatolites, and aren’t even conical in shape — they’re actually ridges.

There are, however, geological processes such as compression that could deform previously deposited sedimentary rock and create a shape similar to stromatolites, which is, contend the authors of today’s research, what’s happened here.

While both teams identified similar chemical signatures in the material, their interpretations differed: The 2016 team suggested they could be evidence of seawater circulating through a microbial community; the 2018 team says the seawater  was introduced later, possibly during the deformation of the rock.

Does this throw the previous paper out the window? Not necessarily. Expect a reply from the 2016 authors, and probably a counter, plus a lot of other unrelated papers on other microfossils and trace fossils vying to be the oldest evidence of life on Earth. Eventually, over years or decades, consensus will emerge. Until the next convention-challenging find.

The study appears today in Nature along with a commentary on the research.