Oldest Gliding Mammals Shed Light on the History of Flight 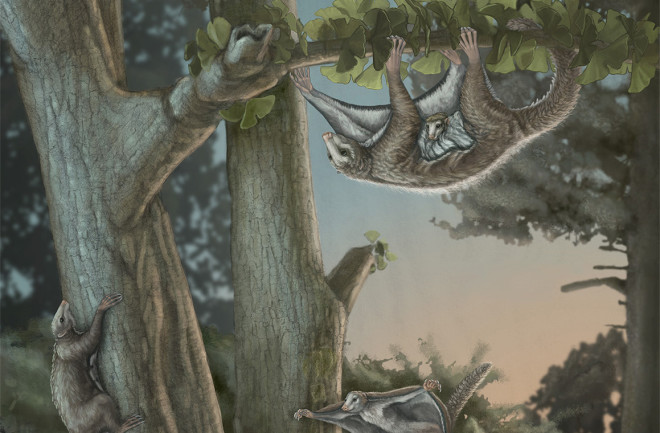 A reconstruction of the gliding mammals. (Credit: April I. Neander/UChicago) The oldest gliding mammals ever discovered are strengthening the case for taking to the skies. Well, they couldn't exactly soar like the eagles, but the two new species, discovered in China, at least sampled the aerial life. Both date to around 160 million years ago during the Jurassic Period, when mammals as a lineage were first getting off the ground — both metaphorically and literally. They're not directly related to the gliders of today, however. Gliding instead seems to be advantageous enough that it has appeared several times throughout our evolutionary history.

Come Glide With Me

Maiopatagium furculiferum. (Credit: Matt Wood/University of Chicago)Maiopatagium furculiferum and Vilevolodon diplomylos were both small, furry mammals well-adapted to an arboreal lifestyle. The fossils are so well preserved that paleontologists could observe a tell-tale fringe of skin and fur around their bodies, similar to the membranes used by sugar gliders and flying squirrels to float through the air. Lengthened fingers allowed them to hang like bats from tree branches, and their gliding membranes, called patagium, gave the ancient mammals the ability to move from tree to tree without ever touching the ground. Aside from the fleshy membranes, researchers from the Beijing Museum of Natural History and the University of Chicago noticed a few additional adaptations that clued them in to the mammals' gliding abilities. Their arms and legs were uniquely proportioned to maximize lift, and both possessed shoulder joints that rotate more freely to help catch the wind. The results of their study were published Wednesday in Nature. By looking at their teeth, researchers concluded that both specimens were herbivores, similar to most gliding species today. It was their reliance on trees and plants for food that likely spurred the development of flight in the first place, the researchers say. Any herbivorous creature living in a forest is going to spend a significant amount of time in the trees, and those that don't have to come down, where all the predators are, will fare much better. Both fossils belong to a group of ancestral mammals that have long been extinct. As such, there is no line connecting them to gliding mammals today, indicating that mammalian aerial skills disappeared and re-emerged at least once throughout history. Using birds as an obvious example, flight is a powerful advantage to have. Even as a (temporarily) airborne creature you expend less energy, move faster and evade potential predators — all benefits that make the evolutionary trade-offs worthwhile. It's not just mammals either, many frog species and even some fish have gained the ability to glide, with evidence that the trait has appeared more than once in those species as well.