Braziers recovered from an ancient Chinese grave site had residues from cannabis smoking in them. 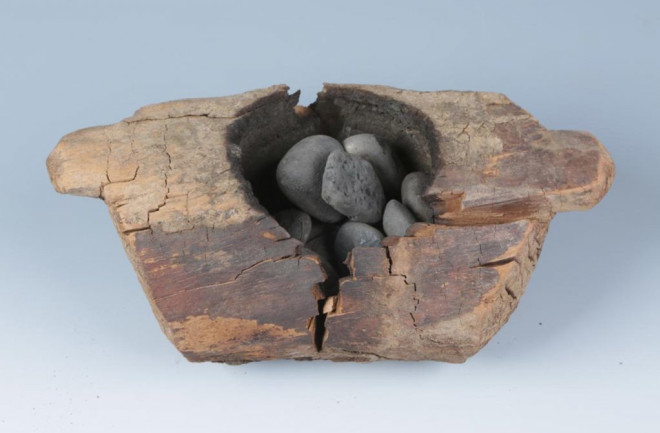 One of the braziers recovered from the grave site. (Credit: Xinhua Wu)

More than 40 tombs dot the southeastern corner of the Pamir plateau, a desert landscape at nearly 10,000 feet elevation in far western China’s high mountains. Buried with the dead is evidence that whoever put them there also conducted rituals at the site more than two millennia ago. And those ceremonies involved a certain hallucinogenic plant we know quite well today: cannabis.

The find is some of the earliest evidence for smoking pot, an international team of scientists announce Wednesday in the journal Science Advances. The plants likely contained high levels of tetrahydrocannabinol, or THC, the main psychoactive ingredient in marijuana. The evidence comes from traces of marijuana in wooden bowls also containing burnt stones found at the site.

“This study actually shows first of all that they are burning this material in these actual wooden burners, and that is part of a funeral ceremony, but also that there are elevated THC levels, so humans are potentially targeting specific plants with great chemical productions,” Robert Spengler, a paleoethnobotanist at the Max Planck Institute for the Science of Human History in Jena Germany, who led the new research, said in a press briefing.

“These are all fairly new revelations, but also they give a really solid rather unequivocal data point for the actual use of this plant as a drug.”

There’s been a long-standing and controversial — or what Spengler calls “lively” — debate among researchers about drug use in ancient times, particularly over cannabis in Central Asia. Some scholars cite premodern texts, such as Herodotus’ The Histories written in 5th century BCE, as giving examples of early drug use. But the texts do not mention cannabis per se and some archaeological evidence has recently been called in question. Spengler and colleagues hoped to find the earliest evidence for cannabis use as a drug, he says.

An archaeological team from the Chinese Academy of Social Sciences excavated the burial chambers of the Jirzankal Cemetery over two trips in 2013 and 2014. Radiocarbon dating and cultural artifacts around the site revealed people used the cemetery about 2500 years ago.

Exactly who these people were isn’t quite clear — though the area is part of Tajikistan today, 2500 years ago, it was at a crossroads where people from East and West mingled. Evidence at the site indicates those buried there likely had connections to groups further west in Eurasia.

Chemical analysis of the internal charred surface of 10 wooden bowls known as braziers found cannabinol (CBN) in all but one. THC breaks down into CBN when exposed to air, light or heat. Two of the four burnt stones the team analyzed also showed chemical traces of CBN. In contrast, the outside surfaces of the braziers did not contain any pot-related chemicals. The findings suggest people burned cannabis by laying hot stones in the braziers, the team reports.

“This is among the earliest chemical evidence of cannabis smoking,” said Yimin Yang, an archaeologist at the University of the Chinese Academy of Sciences in Beijing, who led the research with Spengler, at the press briefing.

People likely inhaled put smoke from the braziers during funeral rituals, Yang says, possibly to communicate with nature or with the deceased.

The CBN the team found in the braziers indicates the cannabis people smoked probably contained higher levels of THC than what’s found in wild plants. Yet, evidence that people cultivated the plant in the region is missing. It is possible that the high elevation of the area produced naturally higher THC levels in the region’s plants, the researchers report.

Another possibility is that the THC trove happened accidentally. Central Asia was once a main hub for the exchange of goods and ideas for the ancient world, Spengler says. Plants were major commodities moving along these trade routes. People first domesticated cannabis in East Asia as an oil seed crop and for clothing and textiles, perhaps as early as 3,500 BC.

As the cannabis was moved along these trade routes, it’s possible that different varieties may have been interbred to create a strain with higher than usual THC levels. “It’s possible that humans were still inflicting evolutionary changes on these plants without actually intensively cultivating them,” Spengler said.

The THC concentrations remain a bit of a mystery for now, but one thing’s for certain: whoever was using them currently holds the title for the world’s oldest weed smoking.