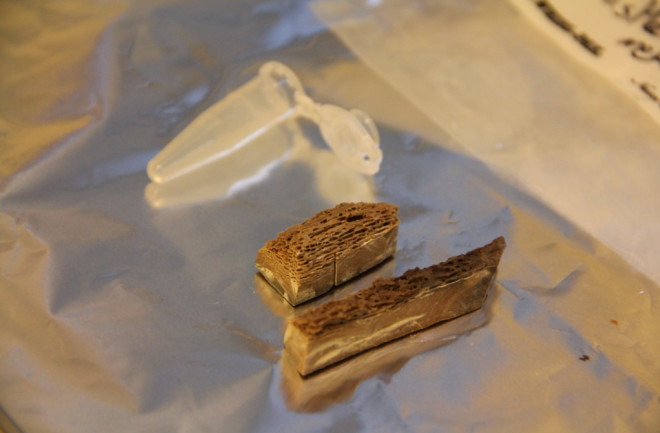 Two pieces of the 700,000 year-old horse metapodial bone, just before DNA extraction. Image courtesy of Ludovic Orlando An ancient horse foot bone found in the permafrost in Canada's remote Yukon territory has caused paleogeneticists to recalibrate their entire understanding of the history of horses. Traces of collagen within the bone matrix contained enough intact DNA to sequence the entire genome, making it the oldest complete genome to date. The fossilized equine lived during the Middle Pleistocene, 560 to 780 thousand years ago. This makes its genome the oldest of any species ever sequenced, by a long shot. In fact, this horse genome is about six times older than the current record-holder. With the ancient horse's genome in hand, the researchers wanted to trace the evolution of this early Equus specimen to contemporary horses. The line-up of comparative species included a horse from the Late Pleistocene (43 thousand years old), a modern Przewalski's horse (thought to be the last line of wild horses), and five modern breeds (Arabian, Icelandic, Norwegian fjord, Standardbred and Thoroughbred). Just for kicks, the researchers also sequenced a donkey. DNA overlap showed that the ancient horse gave rise to all modern wild and domestic horses as well as donkeys and zebras. Based on the genetic variation between these species, and the rate at which such changes could have feasibly occurred, the scientists determined that the Equus lineage originated 4 to 4.5 millions years ago---extending the horse lineage twice as far as previously thought.

Przewalski horses in Khomyntal, Western Mongolia, in one of the three reintroduction sites. The horses were imported in 2004 from Le Villaret, France. Image courtesy of Claudia Feh, Association pour le cheval de Przewalski. Researchers were also able use the data to pin down when wild and domestic horse populations diverged, some 38 to 72 thousand years ago. Since this time, the genes show that domestic horses have been continuously selected for their hearty immune systems and a strong sense of smell. The finding has implications for wild horses as well: it confirms that Przewalski's horses are indeed the last surviving species of wild horse, since they split from the common ancestor before the differentiation of domestic breeds. Przewalski's horses were listed as extinct in the wild in 1996 but have since been reintroduced to the Mongolian steppe, and this sequencing suggests that individuals have enough genetic variation to warrant continued conservation efforts. The researchers also found that horse populations peaked and plummeted multiple times in the past two million years in alignment with periods of extreme climate change, according to the study published in Nature today. Sequencing the oldest genome provides new insights on horse history, but the technique will have implications for all sorts of ancient species. The study shows that tiny bits of ancient DNA once thought too old or small to use can actually still be sequenced. Buried in the upper layers of the Earth's crust, snippets of DNA as short as 25 basepairs in length may be able to survive more than a million years. So giddyup, paleogenetecists!