Oldest Book in the Americas Authenticated

The Grolier Codex is the real deal. 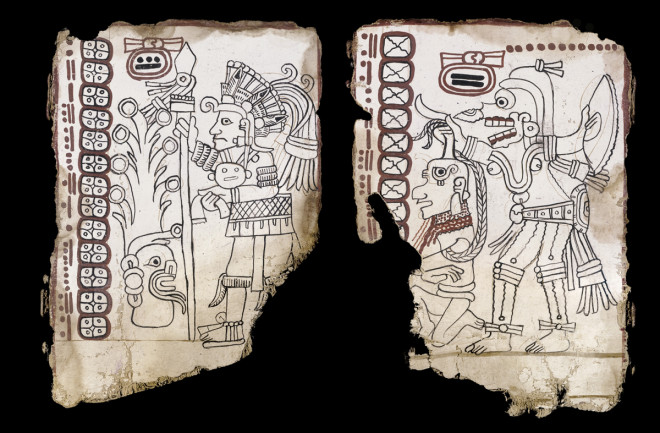 A god dressed as a Toltec warrior (left) and the Maya death god (right), shown decapitating another god, are depicted on fragments of the codex, which scholars have dated to A.D. 1257. The Maya calendar, decorated with deities, charted the movements of Venus across the sky. | Enrico Ferorelli, drawings of underpainting by Stephen Houston

A pre-Columbian Maya calendar charting the movements of Venus and decorated with deities has been proven to be the oldest known book from the Americas. The Grolier Codex, named for the Grolier Club in New York, where the text was exhibited in the 1970s, has been dated to A.D. 1257.

The codex, or paper book, was discovered by looters in the Chiapas state of Mexico and sold in the mid-1960s to a private collector. The manuscript’s shady past has dogged it ever since, and many archaeologists doubted it was authentic. Though carbon dating placed the manuscript in the 13th century, skeptics argued that it was not uncommon for looters to create forgeries on period-correct paper taken from ancient caches.

A new study of the Grolier Codex published in the book Maya Archaeology in 2016 shows that it is indeed the real deal. The most persuasive evidence is that scholars only recently learned of the deities depicted in the codex. The composition of one of the book’s pigments, Maya blue, was discovered only lately as well.

One of four Maya codices in existence, the work contains 11 pages, each featuring a fearsome warrior or deity who likely represents a different aspect of the planet Venus as it moved through the sky.