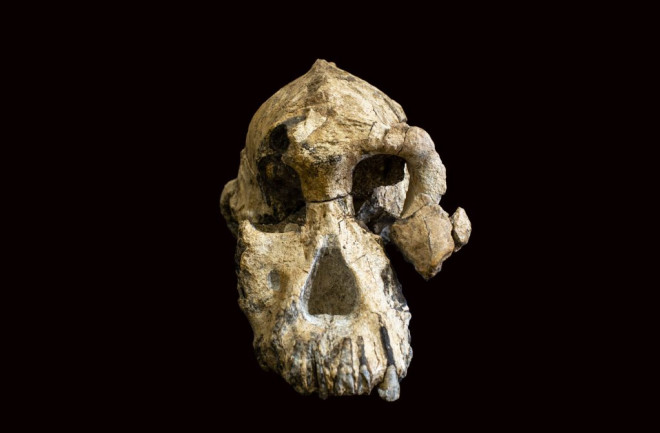 At 3.8 million years old, this mostly complete cranium of Australopithecus anamensis is the oldest australopith skull in the fossil record. (Credit: Dale Omori, courtesy of the Cleveland Museum of Natural History)

On Feb. 10, 2016, the face of a ghost emerged from weathered Ethiopian sandstone. The nearly complete skull, 3.8 million years old, was found less than 20 miles from the site where Lucy, the most famous of our distant evolutionary relatives, was discovered in the 1970s.

Lucy was a member of the species Australopithecus afarensis. This new find, however, was something different.

As paleoanthropologists analyzed the skull and compared it with other hominins, members of our family tree, two things became clear: They were coming face-to-face with a species for the first time, and it would challenge the traditional model of hominin evolution.

Announced today in Nature, the skull belongs to Australopithecus anamensis, a species previously known only from a smattering of partial, highly fragmentary fossils, including a few teeth, a couple incomplete jawbones and a small piece of skull. The researchers believe the new skull, formally known as MRD-VP-1/1 (MRD for short), is probably from an adult male.

“The specimen actually is the first to give a glimpse of what the face of Australopithecus anamensis looked like,” said team leader Yohannes Haile-Selassie, speaking at a press teleconference earlier in the week. Haile-Selassie, a rock star in the world of paleoanthropology, has found other significant fossils in the region, including the first pieces of Australopithecus deyiremeda, announced in 2015 and up to 3.5 million years old.

The australopiths are the earliest unambiguous members of the human evolutionary tree, and A. anamensis, MRD’s species, is the oldest of the australopiths, with finds 3.8 million to 4.2 million years old. (Even older potential hominin fossils exist, such as a single partial skull of Sahelanthropus and multiple partial specimens of two species of Ardipithecus. However, debate continues over whether these earlier species belong in our family tree or are more closely related to apes.)

MRD’s skull preserves several important features that establish it as A. anamensis. It also provides clues to when australopiths developed more evolved, or derived, traits compared with earlier species.

“It’s different from Ardipithecus and older species,” said co-author Stephanie Melillo. “There are two very clear indicators it’s derived: one is a reduction in canine size. Another aspect is the structure of the face, strong and robust …Australopiths have these big, massive faces.”

She added: “It was cool to see this face fit right in.”

And like other australopiths, MRD was all about the face and not so much about the brain. Its braincase was long and narrow, with an estimated volume of less than 370cc, smaller than that of the smallest adult A. afarensis.

For comparison, the earliest members of the genus Homo, about 2 million years ago, had brain volumes more than twice that size. The average modern human brain volume is more than three times that of MRD’s.

The Age Changes Everything

Aside from putting a face to one of the most mysterious members of our family tree, MRD is significant because its age challenges a long-held idea about hominin evolution.

At 3.8 million years old, the skull is the youngest specimen of A. anamensis, which has long been considered the direct ancestor of A. afarensis. However, the oldest example of A. afarensis is 3.9 million years old. That means the two species lived at the same time in the same region of East Africa, for at least 100,000 years. And that’s what changes everything.

“Traditionally we’ve thought about evolution in a linear manner: One species dies out and gives rise to a new species,” said Haile-Selassie. “Now, we’re seeing our evolution is not entirely a linear transition from one species to another. Now, with this discovery…we’re seeing they overlapped. It literally changes the mode of evolution.”

The difference between anagenesis — a linear progression from Species A to its descendent, Species B — and cladogenesis — when a single species A splits into two or more distinct descendent species (B, C, and so on) — may seem a bit in the weeds for the average armchair paleoanthropologist. After all, the traditional concept of speciation itself is one that a growing number of researchers feel is too rigid.

But understanding our origins is one of the greatest quests in science, and identifying which hominins were Grandma and Grandpa, and which were just aunts and uncles, gets a lot more complicated when evolution is not linear.

Two studies, one on the skull’s features and the other on its age and context, plus a News & Views commentary, appear today in Nature.

A reconstruction of MRD-VP-1/1, the first fossil to put a face to the name A. anamensis. (Credit: Facial reconstruction by John Gurche, photograph by Matt Crow, courtesy of the Cleveland Museum of Natural History)
1 free article left
Want More? Get unlimited access for as low as $1.99/month
Subscribe