Researchers played recorded lion roars for elephants to see what they'd do. 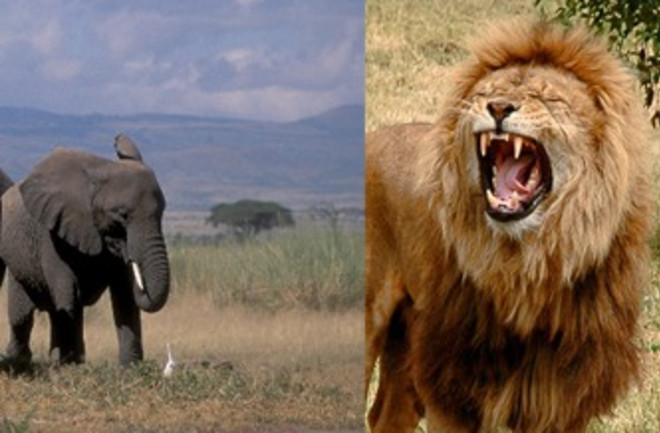 In natural history films, lionesses are usually portrayed as the hunters of the pride, while male lions mope around under shady trees. But males are no layabouts — they’re effective killers in their own right, particularly when they target larger prey like elephants and buffalo. Aside from humans, lions are the only predators powerful enough to kill an elephant. The males, being 50% heavier than the females, are especially suited to the task. It typically takes seven lionesses to kill an elephant, but just two males could do the same.

Even a single male can overpower a young elephant. Between 1994 and 1997, Dereck Joubert found that the lions of Botswana’s Chobe National Park were getting better and better at hunting elephants. He wrote: “In one notable case, a single male lion ran at nearly full speed into the side of a 6-year-old male calf with sufficient force to collapse the elephant on its side.”

Male lions clearly pose a great threat, and older elephants know it. Karen McComb from the University of Sussex has found that older matriarchs — the females who lead elephant herds — are more aware of the threat posed by male lions. If they hear recordings of male roars, they’re more likely to usher their herd into a defensive formation. Their experience and leadership could save their followers’ lives. “Family units led by older matriarchs are going to be in a position to make better decisions about predatory threats, which is likely to enhance the fitness of individuals within the group,” says McComb.

When lions hunt elephants, they usually target youngsters or females, and they almost always attack from behind. They circle round a straggler, jump onto its back and flanks (out of way of the trunk), and drag it to the ground. The never go for a frontal assault, so elephants can thwart their attacks by bunching together. The calves go in the middle; the adults face outwards in a formidable defensive ring of tusks and trunks.

McComb studied 39 groups of elephants at Amboseli National Park, including hundreds of animals who are all individually known. Approaching the herds in vehicles, she played the recorded roars of lions — either one or three, and either all males or all females. She filmed their responses (and asked an independent colleague to confirm her interpretations).

McComb’s videos showed that, unsurprisingly, the elephants responded more strongly to the roars of three lions than the sound of a singleton. The matriarch was more likely to raise her head and ears, and the others were more likely to quickly draw towards her in a tight huddle. All of the herds reacted in the same way, but only those with older leaders (60 years or more) twigged to the greater danger posed by the fake male roars. They were more likely to draw together, they did so more quickly, and they were even more likely to aggressively mob the lions.

The older the matriarchs were, the more sensitive they and their group were to the sound of male lions. They didn’t react in the same way to lionesses, so it wasn’t that they were becoming generally more panicky in their dotage.. Instead, they had become better at discerning the most dangerous roars.

Why does age matter? Male and female lions do have distinct roars, but humans only started to recognise the differences when we used recording equipment and computer software. It’s not surprising that an elephant would need a lifetime of experience to learn these subtle cues.

McComb says that this is the first experiment to show that older matriarchs can help elephant groups to make better decisions in the face of predators. That’s not the only contribution they make. In 2001, McComb showed that groups with older leaders were better at telling the difference between the calls of familiar elephants and those of strangers, and reacting appropriately. In 2008, Charles Foley has suggested that groups with older matriarchs are more likely to survive through drought, because their leaders know how best to find scarce resources and avoid predators.

And in 2007, Lucy King found that matriarchs might even help their herds to avoid getting stung. King showed that elephants will run away if they hear the sound of bees. In her experiments, only one group of elephants didn’t run away when it heard recordings of buzzing. The group was unusually small and young — it had no matriarch and the eldest individual was a 20-year-old male. It could be that none of the three elephants in the group had been stung themselves, and without an experienced leader, they didn’t know the right response.

Studies like these show that matriarchs hold a unique role in elephant society, and that their loss would be particularly damaging. Unfortunately, being among the biggest individuals, matriarchs are often inviting targets for human rifles. It can take minutes for a poacher to rob a group of elephants of a lifetime of accumulated knowledge and experience.