Old wounds show that Triceratops used its horns for combat

Thanks to its trinity of horns, Triceratops has become of the most recognisable of dinosaurs. The sight of two bulls charging at each other and jousting with their horns must have been an incredible one - geeky palaeontologists might get a small thrill just thinking about it. But did it ever really happen? Did Triceratops ever use its unmistakeable horns in combat, or were they simply for show?

Both theories have been put forward, but Andrew Farke from the Raymond M. Alf Museum of Palaeontology (who blogs at the Open Source Palaeontologist) thinks that both were probably right. By looking at the pattern of injuries on the skulls Triceratops specimens, his team has found evidence that the dinosaur really did use its horns for duelling, and its giant neck frill for protection. Triceratops was effectively a reptilian knight that carried two lances and a shield on top of its enormous head.

Farke compared the skull of Triceratops with a related but very different ceratopsian (horned dinosaur) called Centrosaurus. While Triceratops had two large horns over its eyes and a short one on its snout, Centrosaurus had the opposite arrangement - its eyebrow-horns were tiny and its nose one was huge.

Farke reasoned that if these animals fought with one another, their horn arrangements would have led to very different fighting styles. And over time, that would mean that the two animals would build up injuries in different hotspots. If, on the other hand, their horns and frills were only used to display to mates and rivals, they ought to have picked up injuries in more or less the same places.

To test his theory, Farke searched the skulls of several Triceratops and Centrosaurus specimens for signs of damage, be they actual fractures or "periosteal reactions" - ridges of bone that grow as a result of injury.

The results were clear - most of the skull bones in both animals had similar frequencies of injury, with a single exception. Compared to Centrosaurus, Triceratops had ten times as many lesions on its squamosal bone, which starts from behind its eye and covers the lower part of its frill. If you imagine two bulls lowering their heads and jousting with their horns, the squamosal bone is the one that would take the brunt of the impact. 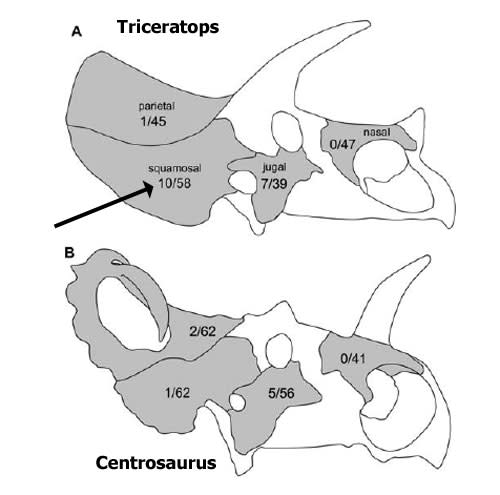 There are, of course, other possible explanations, but Farke has ruled them out. Predators like Tyrannosaurus probably hunted both horned dinosaurs so there's no reason to think that their attacks would have led to more injuries in one than the other. Indeed, 14% of the Triceratops specimens had injuries of some sort, while just 3% of the Centrosaurus ones did. Infections can also create lesions on bone, but there's no reason o believe that a Triceratops-specific infection would have targeted the squamosal bone over and above any other parts of the skull.

All in all, Farke believes that most of Triceratops's squamosal injuries were inflicted by the horns of battling rivals. Unlike many previous studies, his team haven't tried to come up with back-stories to explain individual wounds and indeed, many of the injuries they found were probably not inflicted during duels. But the overall pattern supports the use of horns in fights.

Of course, that doesn't rule out their role in display as well. Indeed, the horns and particularly the frills of ceratopsians probably initially evolved for that purpose, or for recognising members of their own species. As the group developed ever-larger brow horns and combat became more intense, their frills would have also become more important for defence, as well as display.

So what of Centrosaurus? It's relative lack of skull injuries suggests that, unlike Triceratops, it wasn't one for head-on confrontations. Farke suggests that this animal may have clashed by aiming its blows at an opponent's flanks rather than its head. Indeed, specimens of Centrosaurus, as well as related species like Chasmosaurus and Pachyrhinosaurus have often been found with fractured ribs. It will be interesting to see if the frequency of these injuries were higher in this group than in Triceratops.