The paddlefish is a surreal giant, with a spatula-shaped nose that some scientists believe it uses to sense the electric fields of its prey, which it sucks up like a whale. You might not think of it as an animal that has much to offer in our quest to understand ourselves. But in fact, underneath the glaring differences, paddlefish and humans share some surprising similarities. And those similarities are precious clues to how our distant ancestors evolved hands and feet. Back 400 million years ago, our ancestors swam with fins. The descendants of those early fish split off into two main branches. One became the ray-finned fishes--a group that makes up the vast majority of fish alive today. The other, sometimes called the lobefins, produced many species, but only three lineages of lobefins survive today. One is the coelacanths, which survive in a few isolated spots in the Indian Ocean. One is the lungfishes, which struggle against extinction in rivers and ponds in Australia, Africa and South America. The third lineage is by far the most successful: the fish with feet, or also known as the tetrapods. Tetrapods include amphibians, reptiles, and mammals. We belong to their ranks. Starting in the late 1800s, paleontologists began to piece together clues as to how the fins of our ancestors evolved into our hands and feet. They found fossil lobefins from around 370 million years ago--that had a few stout bones in their fins that corresponded to the long bones of tetrapod limbs. (For more on this history, check out my first book, At the Water's Edge.) But some of the most important clues are quite fresh. Last year, Neil Shubin of the University of Chicago and his colleagues discovered a tetrapod-like fish in the Arctic called Tiktaalik that had particularly tetrapod-like limbs. Bones in its fins corresponded not only to the long bones of our limbs, but also to some of the bones in our wrists and ankles. Yet those bones were surrounded by fin rays that today you'd expect to see on a fish. It's a vestige of a lost time in evolution, when fins were becoming feet. Shubin and his colleagues can also find evidence for how limbs evolved much closer to home--in their laboratories. A tetrapod embryo, be it chicken, mole, or human, produces four tiny buds along its sides, each of which then grows into a limb. In the late 1980s scientists began to pinpoint the genes that control the limb bud's development. The results of these experiments (carried out on chicks) were cause for a little deja vu. Scientists had already discovered that many of these genes play important roles in the development of other parts of the body. For example, the head-to-tail axis of the vertebrate body is divvied up into different regions by a set of genes called Hox genes. Different combinations of proteins made from Hox genes can specify a section of the brain, a particular sort of backbone, or the point at which a tail branches off from the body. Thus it appeared that Hox genes, which in vertebrates had originally set the coordinates for the body axis, was borrowed at some point in the past to set the coordinates of the tetrapod limb. The logical thing to do next was to see how fish fins are built. And in the mid-1990s, French scientists did so. The fish they chose was the zebrafish. By then zebrafish had become wonderfully easy for scientists to work on. They have many advantages over other fish--for one thing, their embryos are transparent, making it easy to see the stains that mark different kinds of proteins. It turned out that zebrafish, like us, use Hox genes to build fins. And the pattern of Hox genes they use turned out to be practically identical to the pattern found in tetrapod limb buds, at least in the earliest stages. But as each kind of embryo develops further, the similarity ends. Zebrafish fins stop producing proteins from Hox proteins, and the skeletal bones in their fins never get very big. Insead, they become embedded in other tissues, such as rays, which form most of their fin. In the tetrapod embryo, on the other hand, cells at the forward edge of the limb bud keep making proteins from their Hox genes. But the pattern in which they do so is different from the earlier one shared by fish and tetrapods. And it's in this region, with its new Hox pattern, where hands and feet eventually form. So here, it seemed, was the pivot on which the evolution of the hand had turned. By redeploying Hox genes in a still newer way, a limb-like fin had sprouted a hand (or, to be more precise about it, an autopod). There was just one problem. When scientists pick out a model organism, they sometimes put more value on how easy it is to study than where it fits on the evolutionary tree. A Drosophila fly is no ordinary insect, for example, but the end result of a lot of very peculiar evolution. And zebrafish are no ordinary fish. They belong to a very young, very successful branch of ray-finned fish, called the teleosts. That's not to say that scientists can't learn a great deal about biology from Drosophila or zebrafish, nor is that to say that those lessons can't apply to humans. But it's a fact that can't be ignored. 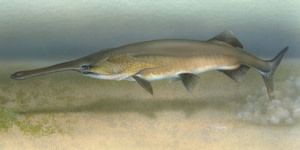 This fact has prompted several teams of scientists to turn their attention from the zebrafish to the paddlefish. The paddlefish belongs to a much older branch of the ray-finned fish. Along with paddlefish, this lineage is represented today only by a few species, such as sturgeon. Scientists have now figured out how to rear paddlefish embryos, and how to prepare them in order to see which genes turn on in the cells of the developing fin. In today's issue of Nature, Shubin and fellow Chicago biologists Marcus Davis and Randall Dahn report a surprising result from their own study on paddlefish. In some ways, it turns out, the fins of paddlefish are a lot more like our hands than the fins of zebrafish. When the fin of a paddlefish starts to form, Hox genes become active in the bud in the same pattern shared by zebrafish and tetrapods. But when zebrafish fins stop, the paddlefish fin keeps going. Its Hox genes produce the same late-stage pattern that defines our own hands and feet. The paddlefish doesn't go on to form hands and feet, of course. Instead, it forms a set of skeletal bones that's more developed than the skeletal bones in the fins of zebrafish and other teleosts. Around that core of skeletal bones, the paddlefish then grows other tissues to form a familiar fish fin, which it can use for swimming. The Chicago team conclude that when it comes to Hox patterns, it's zebrafish that are the new twist on limb development, not us tetrapods. The scientists summarize their findings in an evolutionary tree, which I've reprinted below. The common ancestor of ray-finned fish and tetrapods, an early bony fish, had fins in which Hox genes continued to be expressed late in development. But it still grew full-fledged fins made of rays and other fin tissues. This late Hox pattern is still found today in the limb buds of tetrapods and paddlefish. In the ancestors of zebrafish and other teleosts, however, this late pattern disappeared. Something else disappeared in our own lineage. As Tiktaalik and other fossils document, the outer fringe of fin tissues gradually shrank until it disappeared altogether. What was left were the skeletal bones, which grew and branched, evolving wrists, ankles, fingers and toes. Tetrapods became able to walk, first underwater and then on land. Later, these autopods evolved into bird wings, into whale flippers, into horse hoofs, into human hands. But they are still built with the help of gene patterns that existed dozens of millions of years before the first true hands and feet existed, patterns that can be found in distant relatives like the paddlefish. Teleosts and tetrapods took opposite paths, the new research indicates, and along the way each found its own sort of success. 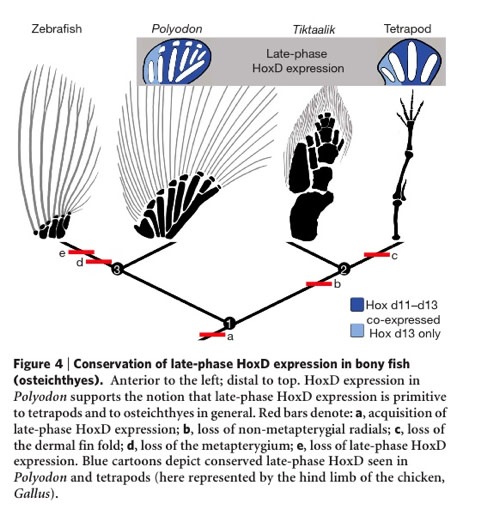