Of voles and men: exploring the genetics of commitment

Love is all around us and love is in the air, and if I know my mainstream science reporters, today they will have you believe that love is in our genes too. A new report suggests that variation in a gene called AVPR1A has a small but evident influence on the strength of a relationship, the likelihood of tying the knot and the risk of divorce. It's news for humans, but it's well-known that the gene's rodent counterpart affects the bonds between pairs of voles. The story really starts with these small rodents and it's them that I now turn to. 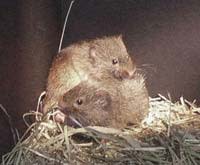 Voles make unexpectedly good animals to study if you're interested in the genetic basis of commitment, because closely related species have very different mating strategies. The prairie vole is (mostly) monogamous; males and females mate for life and look after their pups with great care. On the other hand, the closely related meadow and montane voles have more of the love-rat about them - males have many mates, flit between them and take no responsibility for the care of their many young.

Behind these different behaviours lie is a hormone called vasopressin and its partner molecule - the vasopressin receptor V1aR. Vasopressin is a neurotransmitter - a signalling molecule of the brain - and it transmits signals by attaching to V1aR, like a key fitting into a lock. Alter the balance of these molecules and you can change the voles' behaviour. For example, give extra vasopressin to a prairie vole and it will develop a stronger bond with its partner, but block the receptor and you break the bond.

It even works in the promiscuous meadow voles. Prairie voles have much higher levels of the vasopressin receptor than meadow voles do and in 2004, Miranda Lim loaded the forebrains of meadow vole males with extra copies of V1aR to the same levels of their prairie cousins. The males were paired with a female and when they had to choose between her and a newcomer, those that packed extra V1aR spent most of their time with their familiar partners. Those that were injected with a random gene, unrelated to monogamy, stuck to their old promiscuous ways.

The sequence of the V1aR gene is very much the same in the three vole species but there are differences in the area just ahead of the gene, which affects how it's deployed. In this regulatory area, the prairie vole has a short stretch of DNA that its promiscuous cousins lack. Altering this sequence affects not only the distribution of V1aR in the animal's brain, but also its fidelity towards its partner. 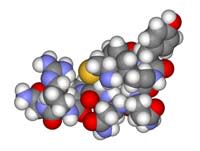 Humans have our own version of the vasopressin receptor, with its very own unmemorable acronym - AVPR1A. Like its vole counterpart, it's preceded by an important stretch of DNA that is rife with repetitive sequences. These are known as "repeat polymorphisms"; they are short genetic leitmotifs that vary in number from person to person. According to earlier research, these variations in this sequence can affect human behaviour and are linked to altruistic tendencies, the risk of autism and the age at which people first have sex.

We can now add the strength of relationships to that list. Hasse Walum at the Karolinska Institute compared the sequence of repeat polymorphisms in AVPR1A among 552 pairs of Swedish twins, all of whom were either married or living with a partner. He also asked them a series of 13 questions designed to find out about various aspects of their relationships such as how much time they spent together, how often they kissed or whether they had ever considered divorce. Based on their answers, each person was given a score that indicated the quality of their relationship, with a maximum of 66.

Walum found a link between this score and a version of one particular repeat polymorphism. Men who carried this sequence, known as allele 334, had lower-than-average scores and the more copies they had, the lower their rating. It's worth noting that the differences were tiny - men with no copies of allele 334 had an average score of 48 out of 66, while those with two had an average score of 45.5. Nonetheless, statistical tests suggested that the differences were unlikely to have arisen by chance.

The fact that it only really affects the behaviour of men is consistent with vasopressin's role in voles. And while women are not directly influenced by it, they are certainly indirectly affected. Those who were partnered with allele 334 carriers were prone to rating their relationships slightly more harshly than those whose partners didn't carry it.

Based on these results, Walum suggests that AVPR1A does indeed affect the bonds that we form with our partners although to a much weaker extent than its counterpart does in voles. Allele 334 in particular has a negative influence on our relationships. The effects may be small but bear in mind that everyone in this study already showed a high level of commitment by marrying or moving in with their partner. Widen the sample to include chronic singletons and you might see much stronger effects especially since about 40% of men carry at least one copy of allele 334.

Even so, it's clear that the researchers are being very cautious about their findings and I've tried to reflect that here. The word "tentatively" appears no less than three times in the closing paragraphs. Indeed, they specifically write that "this study clearly does not mean that this polymorphism may serve as a predictor of human pair-bonding behaviour on the individual level". You can't sequence someone's AVPR1A gene and tell if they're going to be a suitable partner.

Which brings me back to the mainstream media. Some pieces have been balanced and mercifully, no one's written that men can blame their genes instead of their jeans . But the majority of pieces have proclaimed the discovery of a "divorce gene", a "monogamy gene" and yes, the "love rat gene", among other equally inane descriptions. They are unhelpful terms, for they prolong the misconception that single genes can account for complicated behaviours, and that they do so in a deterministic way.

The study, of course, says nothing of the sort. It does however confirm that researching the love lives of voles is a good idea - the lessons we've learned about the effect of vasopressin in their tiny brains are also relevant to humans. It means that looking for other players that affect relationship-building in voles is a worthwhile quest.

Vasopressin is far the only molecule involved in forming relationships, even in voles and there is still much we don't know about the other players involved. Monogamy and promiscuity themselves are not clear-cut distinctions and there's been recent evidence that even the prairie vole isn't the faithful saint it's made out to be...

Update: I wrote that "mercifully no one's written that men can blame their genes instead of their jeans". I was wrong. Today's Science Journalism FAIL award goes to the BBC for "Commitment phobes can blame genes", which describes a man's reluctance to marry as being down to a "genetic flaw". It even has a picture of George Clooney looking evil.