Octopuses Edit Their Genetic Code Like No Other Animal 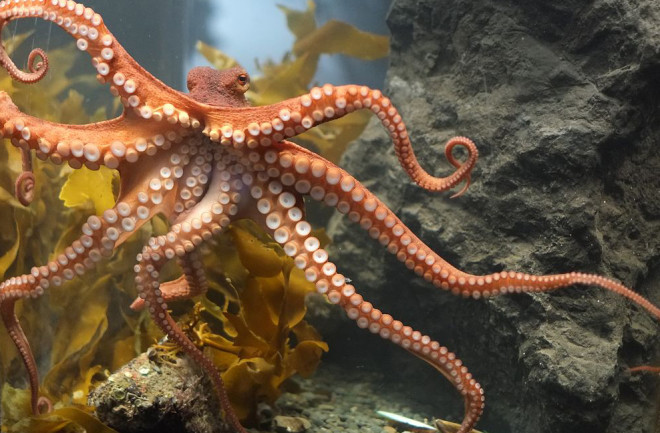 (Credit: Wikimedia Commons) New research into the cephalopod genome is undermining our assumptions about evolution, and the role that DNA mutations play in updating a species' physiology. Researchers from the Marine Biological Laboratory in Woods Hole and Tel Aviv University have been studying how cephalopods — squids, octopuses, cuttlefish and nautiluses — edit their genome, and found that instead of relying on DNA mutations to adapt, they have the ability to make changes to their RNA, the genetic "messengers" that carry out the instructions written by DNA. This means that their fundamental genetic code remains largely the same from generation to generation, while changes occur at the level of the individual and don't carry over to their offspring.

In humans, less than one percent of our RNA transcripts show signs of editing, and the same holds true across most other species. In our cells, DNA instructions get copied faithfully to RNA, who then carry out their missions as instructed. Changes, if they do occur, happen to our DNA and affect us at the level of the species, taking generations. Cephalopods, however, have figured out how to tinker with the process of transcribing DNA to RNA, editing their genetic messages to create changes on an individual level. Looking at a previously published octopus genome to search for signs of editing, researchers report that the level of RNA editing is about an order of magnitude higher than in primates. This means that octopuses alter the messages written by their DNA, transforming the original code into custom commands. The result is the production of novel proteins and enzymes that could potentially grant them new abilities. Back in 2015, some of the same researchers discovered that octopuses edit their RNA more often than other species. Now, they've gone a step further by searching through a whole octopus genome to find where and when these edits happen and how this could affect their evolutionary history. They published their findings Thursday in Cell. Many of the RNA edits occur in cephalopod brains, say the researchers, such as one adaptation that allows their neurons to function in cold environments. Octopuses are infamously smart creatures, able to open jar lids and even escape their aquariums, and the ability to make changes to their RNA could play a role in their intelligence. Though no definitive evidence exists, the researchers say that the effects of such RNA editing are likely "profound and complex." Further shoring up their claim is the discovery that nautiluses, which don't share octopuses' smarts, don't rely as heavily on RNA editing. If the researchers' theory is correct, being able to alter RNA could be an important factor in the species' IQ. They still don't, however, know what causes some bits of RNA to change after transcription while others stay the same. It's likely not anything conscious on the part of the cephalopods, and could simply be the hand of natural selection favoring beneficial alterations to RNA.

What cephalopods have done, essentially, is to trade long-term, DNA-driven evolution for more immediate and individual adaptability. The researchers found that their DNA showed much lower rates of mutation than in most creatures, something they say is necessary for this type of RNA editing. The parts of their genome that code for RNA editing are large, making up anywhere from 23 to 41 percent of protein coding sequences, depending on the species. If any of these areas get altered, they won't be able to change their RNA anymore. So, they've favored immutability in this part of the genome, vastly slowing down their rate of evolution. The upside, however, is that individual cephalopod bodies can undergo relatively sweeping changes. The new insights into cephalopod evolution have also pushed back the timeline for cephalopods. Most estimates of when a species first appeared are based on "molecular clock" analyses, which take a known rate of genetic mutation and extrapolate backwards to find when they would have first appeared. If squids and octopuses were experiencing mutations at a much lower rate, it would greatly extend their plausible history.