Researchers dubbed one of the new towns Octlantis. 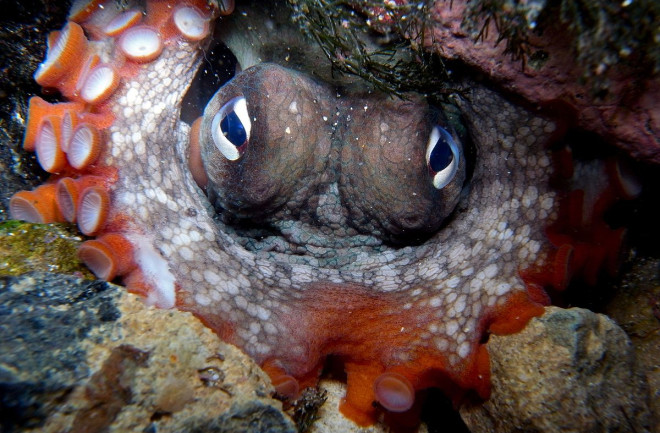 Underneath the waves lies a lost city, home to untold riches and guarded jealously by the strange creatures who make their homes within its confines. Well, the riches are all shellfish, but "Octlantis," a newly discovered settlement inhabited by around a dozen common Sydney octopuses, does have some strange residents.

Octopuses were once considered solitary creatures, thought to roam the depths alone, meeting only to mate. But recent discoveries have begun to overturn that assumption, however. Just take the 2009 discovery of a settlement similar to Octlantis, dubbed "Octopolis," inhabited by the same type of octopus. While this species, dubbed the "Gloomy Octopus," is still commonly found by its lonesome, in certain situations, it appears that they decide to band together into communities centered around small dens made of shells.

In Jervis Bay, off Eastern Australia, Octopolis was built around a man-made object of uncertain provenance, about which the octopuses gradually constructed small dens from the shell middens left over from foraging and feasting. Nearby Octlantis provides a crucial confirmation of the behavior, but that "city" didn't start around an artificial nucleus. The findings were published in the journal Marine and Freshwater Behaviour and Physiology.

Researchers from the U.S. and Australia made several dives to the site in 2016 and 2017, and placed cameras to record the octopuses' interactions. Life in the city is no peaceful idyll, they found. Octopuses taking shelter in their dens were often attacked and forced out by other members of their species, and various forms of aggression were common. Victory often went to the larger of the two, and the loser was forced to slink away, homeless for the time being.

Nevertheless, living in a community could offer some important benefits for tentacled city-slickers. As study co-author Peter Godfrey-Smith writes in his book on octopus intelligence Other Minds: Residents of Octopolis are often harried by sharks, fish and other predators when they ventured out into the open waters. Their dens, however, seemed to provide them safe haven.

Both communities were also built near dense populations of scallops, and the bounty of food both enables the octopuses' sedentary lifestyle and could convince them to play nice with each other. Indeed, the rich prey availability has enabled a sort of cyclical expansion of the cities. As more shellfish get eaten and discarded, the midden grows, allowing more octopuses to build dens and begin discarding shellfish in turn.

Godfrey-Smith refers to the octopuses in the two cities as "ecosystem engineers," given that they have essentially landscaped their surroundings to create a more hospitable environment. The urban development has itself attracted a much more diverse assemblage of sea life, he writes, expanding the effects of the octopuses labors beyond just their species.

Of course, it is a bit of stretch to call Octatlantis a community in the traditional sense. Octopuses are not obligated to live together, and given the unique advantages of this particular area, it seems they've simply chosen to put up with each other's presence rather than embrace togetherness wholeheartedly. Nevertheless, the advent of communities and social life is theorized to have spurred our own development, and these gatherings give researchers the chance to observe the beginnings of what could be a long-term experiment in octopus cultural evolution.

Already, several generations of octopus have inhabited the sites, indicating that they are more than just a passing fad. Octopolis and Octlantis, two cities on the rise, seem here to stay.