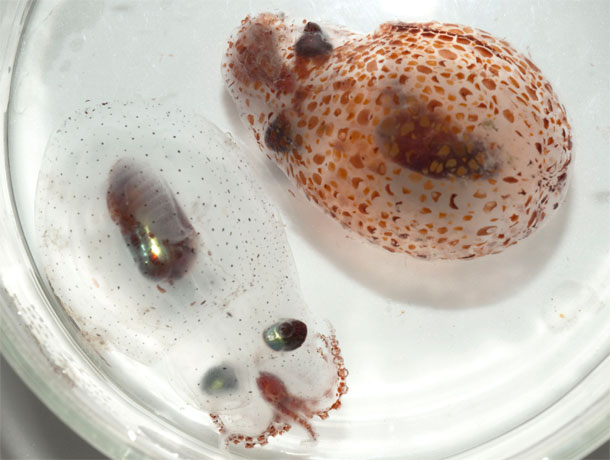 There are two ways of becoming invisible: you can either be transparent so all light passes through your body, or you can blend in by taking on the colours of your surroundings. A truly incredible animal would be able to do both, switching between the two at a whim. And that’s exactly what some squids and octopuses can do. Sarah Zylinski and Sonke Johnsen from Duke University found that two cephalopods – the octopus Japetella heathi and the squid Onychoteuthis banksii – can switch their camouflage strategy depending on how bright their environment is. When sunlight streams from above, they choose the see-through option. When their world darkens, they go for darker colours that blend in. Both species live in the twilight zone, a band of water between 600 and 1000 metres down. Sunlight only just grasps at this world, which teeters on the edge of total darkness. The animals that live here face unique challenges if they want to stay hidden. Transparent animals are never perfectly transparent (although Japetella does a pretty good job; see below). Most light passes through them, but their bodies still scatter and reflect a small proportion. These reflections are too faint if the source of the light is the sun – even predators with huge, upwards-facing eyes, like the hatchetfish, would have trouble seeing them. But some hunters, like the aptly named headlight fish, produce their own light. If they shine upon transparent prey, the reflections, however faint, would still be much brighter than the ambient light from above, and they’d give away the animal’s position. Many deep-sea animals deal with this problem by being either red or black. These colours reflect very little light, especially at the wavelengths used by predatory fish. They are invisible to the headlight fish, but their dark silhouettes would stand out to the hatchetfish, watching them from below. It seems like a no-win situation: either strategy leaves hides an animal from one group of predators but leaves it open to the other. So some cephalopods switch their tactics. 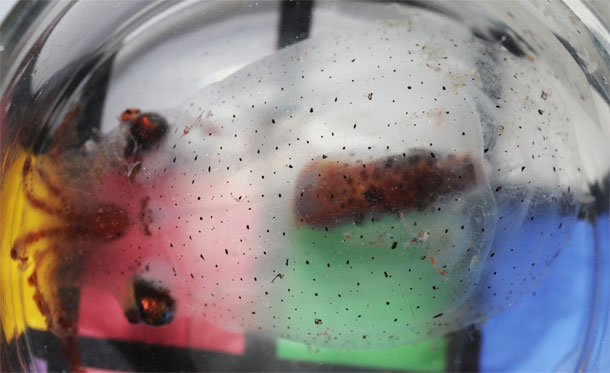 Zylinski and Johnsen collected Japetella and Onychoteuthis from deep waters off the coasts of Peru and California. Both animals are covered in sacs of red pigment called chromatophores, which they can expand or contract at will. Under normal ambient light, the sacs are shrivelled and the animals are largely transparent. But when Zylinski and Johnsen shone blue light onto them, of the same frequency used by prowling fish, they rapidly expanded their sacs and turned red. The cephalopods only reacted in this way to blue light, not to red hues or to other threatening cues like an overhead shadow or a passing object. Their switch from see-through to red is a very specific response to the headlights of a predator. And it could make the difference between life and death. When an underwater light shines onto them, they reflect half as much of it when they’re red than when they’re transparent, especially at the blue-green wavelengths that deep-sea eyes are typically attuned to. This news may not come as a surprise to people who are familiar with cephalopods. They are intelligent masters of disguise, able to rapidly change their colour, shape and texture to disappear into their surroundings. Some can even mimic a variety of other ocean animals. But even for this accomplished group, this dynamic switch is something new to science. It shows how much we still have to discover about the cephalopods that live in deeper waters, compared to their peers from the shallows. Reference: Zylinski & Johnsen. 2011. Mesopelagic Cephalopods Switch between Transparency and Pigmentation to Optimize Camouflage in the Deep. Current Biology http://dx.doi.org/10.1016/j.cub.2011.10.014Photos and video by Sarah Zylinski More on cephalopod defences: